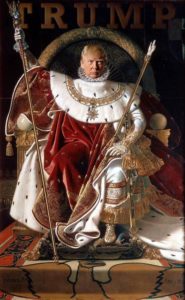 Kek is a generous god. As Hillary Clinton collapsed [2] on the street and the media was finally forced to cover what only Alt Right shitposters have been discussing for weeks, it was hard not to believe the ancient lord of chaos was smiling upon us [3]. Some of us have always believed. And even as this is written, stern faced reporters on MSNBC are discussing an official statement from the Hillary Clinton campaign denouncing “Pepe,” because “that cartoon frog is more sinister than you may realize [4].”

Even the heretics who doubt the power of meme magic must concede the ability of the Alt Right to set up confirmation bias and push counter-Narratives against the mainstream media. As we could see with the woeful responses to the Alt Right press conference last weekend, all reporters [5] have to offer is snark and moral signaling [6]. Whether it’s Protective Stupidity [7] or because they are actually just stupid, leftists have lost the ability to engage with our ideas at the very moment when they can no longer ignore us. When the wrist flapping faux outrage of the effeminate neurotics and hysterical shrews of the lying press finally loses its effectiveness, the entire edifice will collapse.

What precisely will replace it is up for debate. But in today’s memes we can see tomorrow’s dreams of a world of hierarchy, excellence, and power. And it scares the hell out of the shitlibs.

An ostensible adult male, something named Nico Pitney, disgraces his ancestors by serving as a senior editor at The Huffington Post. Arianna Huffington is still reeling from what could be Trump’s most savage tweet in his long and glorious history [8], in which The Donald praised Huffington’s ex-husband for leaving the “unattractive inside and out” Arianna — for another man. As a result, The Huffington Post continues to publish its whiny “Editor’s Note” after every article mentioning Trump.

The existence of a man who could read such a publication, let alone work for it, lends credence to the most outlandish conspiracy theories about the negative effects of soy consumption and fluoride in the water supply. In any event, Pitney wrote an article moaning that it is “so very creepy” Trump’s followers refer to him as “God-Emperor.”

Part of this, of course, is ironic. Self-awareness is actually one of the best characteristics of the Alt Right. It keeps us from tearing each other apart. We have it because we don’t know what the Old America was actually like. We were raised in a country where Martin Luther King [9]is the ultimate hero, A People’s History of the United States was a public school textbook, and the Founding Fathers were portrayed as savage racists. At the same time, we notice how egalitarianism functions as a political weapon. The most maudlin signaling about anti-racism and freedom for minorities is always a cover for elite power. And it’s the most privileged people in the world who constantly lecture us about our “privilege.”

This leads to a refreshing cynicism, a willingness to mock taboos, to laugh at demands to feel guilty. Their morality is simply a weapon, their showy panic about opinions they don’t like simply a tactic. We know it’s all bullshit. And the ability to laugh at it is allows us to handle the degeneracy and foolishness of Weimerica without simply going mad. Calling Trump “God-Emperor” is funny because it disturbs meatbags like Pitney, who derive their personality, identity and sense of values from whatever was the last thing they read on Upworthy.

But this cynicism is combined with an almost heartbreaking idealism. When Trump is memed into the Emperor of Mankind from 40K [10], or Alt Right Fan Fiction [11] tweets absurd scenarios with pictures taken from old sci-fi books, or people create images featuring Trump and Putin celebrating the reconquest of Constantinople, it’s partially a joke. But it’s also a real yearning for something greater than what we have now, this dead world and this rotten System which enslaves us through our own decadence. Like runes, memes [12] capture something which has a meaning beyond mere sounds or written words.

As with Jack from Fight Club [13], we are the “middle children of history, with no purpose or place.” And as Markus Willinger bemoans in Generation Identity [14], the only outlet for heroism, idealism, and community for many young men is found in video games.  For so many years, engagement in metapolitics seemed like fighting a final rearguard action, the last war against the Last Man [15]. Our identity and sense of meaning was taken away, our country was turned into a Lockean shopping mall, and our people waste their lives working crap jobs to pay for electronic gadgets to distract from the quiet horror that is Weimerica.

But something was stirring within us. The return of the gods, the coming of the emperor, the beginning of a crusade, all of these vague ideas of something greater are crossing over into reality. It’s not LARPing [16]. It’s transforming the world. And it’s desperately needed.

Make no mistake — we, right now, live in the most consequential time in all history. Europe, the sacred homeland of our entire race, is on the brink of extinction. The United States of America is crumbling before our eyes. Whole outposts of the West, from Rhodesia to entire sections of cities like Paris, have reverted to barbarism. Civilization retreats into ever smaller pockets. China is rising to world hegemony. As others have said, we must become the greatest generation in our history, or we will be the last generation.

There was talk after September 11, 2001 that the “End of History” was over and that there was a new fight against Islamic terrorism. But this is a lie. These wars were justified with the sickly sweet rhetoric of “spreading democracy,” as if it was just an attempt to speed up the global democratic revolution that was inevitable anyway. The wars in Iraq and Afghanistan were meaningless wastes, Kafkaesque in their futility and pointlessness. Blaming it monocausally on the Jews is actually the most comforting explanation. The only other possible reason is that our leaders are criminally incompetent. Few at the time and no one today can pretend anything significant was going to change. At “best,” we would have spent blood and treasure to make sure Iraqis too can one day have their young daughters looking to Miley Cyrus as a role model.

History really restarted when Donald Trump descended that escalator to give a speech about running for President. It’s not because he’s some nationalist hero or has a history of fighting for us. Indeed, he has a history of promoting desegregation, palling around with Al Sharpton and Jesse Jackson, and slavishly supporting Israel. But he did three critical things — he spoke openly about immigration, he presented a vision of America as a great and strong country, and, most importantly, he refused to cave when the media attacked him.

The last is most important because it’s the media which imprisons our consciousness, which stamps out any embers of independent thought or resistance, which ultimately supports the entire System. On Tuesday, Barack Obama moaned uncomprehendingly about how Trump is getting away with things which would destroy anyone else. Media outlets like Vice essentially travel the world looking for interesting people, and then cry and scream to get them shut down. Trump dealt the most serious blow to their power in decades, forcing them to sacrifice their pretense of objectivity and legitimacy [17] on to try to stop him. Only naked repression is left as a tool.

As for Trump himself [18], there is something imperial about him, despite his never having served in uniform (unless you count military school) or having seen combat. Alone among political figures, he doesn’t pretend to be a victim or call to our pity or weakness. His appeal is, as Peter Brimelow said, “kingly,” appealing to our strength. You can’t imagine calling Jeb Bush or Ted Cruz “Emperor” even as a joke. It doesn’t matter if Trump’s a conman or a smooth-talker, if he was weak on immigration in the past, if he’s appeared in embarrassing television commercials in the ’90s. Even though this is a man who slaps his name on everything he owns, he’s become something greater than himself. He’s an avatar, and we’re reading our dreams into him.

And it’s oddly fitting. He’s a reality television star and a creation of the media, and he’s breaking the Lügenpresse. He’s a celebrity famous mostly for being famous (how many other real estate developers can you name?) and he’s being used to plan a return to aristocracy and heroism. He’s a capitalist with properties around the world who has spent his whole life trying to be important in Manhattan, and now he’s the champion of Middle America. He’s a millionaire who appealed to the lowest common denominator, and now he’s the symbol of hierarchy. In the Current Year, it had to be this way [19].

But even if he utterly betrays us we can’t go back. Real politics will begin again [20], for we are awakening to ourselves. We are aspiring to something higher, nobler, even if it can only be expressed sometimes in surrealist comedy or memes slapped together in Microsoft Paint. And we have no choice because our enemies will not allow us a choice [21]. We will physically remove the invaders from our homelands — or our civilization will crumble. We will shut the lying mouths of the media parasites — or our people will die. And most importantly, we will reject the enemy’s garbage morality because we know it for what it is, an insidious weapon. We will rip this poisonous weed out by the roots — or it will choke our entire race.

It’s easy to fall into despair living at this time. When you’re surrounded by filth, you fantasize about being in a real community, in a nation of your own people, surrounded by stable families and a strong culture. But in some ways, we are even more blessed to be alive in this time of struggle. It falls to us to tear down everything around us and create the world to come, to act as heralds of the return of the gods, to build the coming Empire, to propel our people upward to unprecedented glories. To live in “interesting times” is a joy, not a curse.

So meme on my brothers, for we are all part of something far larger than ourselves. Don’t lose that self-awareness or that saving irony which keeps us from insanity. But don’t kid yourself that what you’re doing doesn’t matter. We’ve started something. We can’t know for sure where it will take us. But there’s a palpable sense we are on the brink of something monumental, regardless of what happens in November.

Venerate the immortal Emperor. And rejoice — because what a time to be alive.