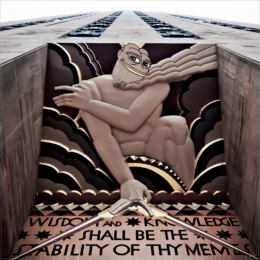 Catlady Ascendancy hierophant Hillary Clinton recently published a post [2] on her campaign website blaspheming against the avatar Pepe, who is a meme incarnation of the Egyptian pagan god of chaos, Kek. The offensive post, “Donald Trump, Pepe the frog, and white supremacists: an explainer,” describes one of the freshest pepes, a photoshopped movie poster for The Expendables movie franchise that instead features The Deplorables [3], as “an odd photo” and the “frog standing directly behind Trump” as “a symbol associated with white supremacy.”

“Pepe’s been almost entirely co-opted by the white supremacists who call themselves the ‘alt-right.’ They’ve decided to take back Pepe by adding swastikas and other symbols of anti-semitism and white supremacy.”

And in a display of scripted pearl clutching, the blasphemer calls and responds:

Let me get this straight: Trump’s presidential campaign is posting memes associated with white supremacy online?

The Clinton campaign, a church of no salvation [4] which harbors the most rancid congregation of defilers and iconoclasts, charges we who follow the teachings of Esoteric Kekism [5] and embrace the seven principles of the Alt-Right [6] with being so-called supremacists [7]. Much like the term racist, supremacist is used against White people who are insufficiently liberal on identity issues. In other words, if you believe Whites exist as a valid political interest group, a race, or a culture distinct from other groups, you are a racist and a supremacist. If you believe those same things about other groups, such as blacks or mestizos, you are a paragon of civic virtue, a social justice advocate [8], and a living saint in the congregation of the cucks. If not, you are a heretic of the Diverse faith.

This is because Clinton and her sycophants follow the false doctrines of third worldism—the belief that people of color and their interests are morally superior to those of Whites [9]. For third worldists, racist and supremacist are markers used to identify diversity heretics, i.e. White skeptics. A supremacist is someone who rejects third worldism. Always keep this in mind and pay attention to who is saying it to whom.

Third worldism, as an idea system, shapes the world. It reigns politically and metapolitically. You can find it anywhere from affirmative action policies in the multinational corporate and academic world, to refugee resettlement programs in the American Midwest, to California’s “sanctuary cities,” to the H1B1 visa programs that directly recreate 19th century coolie labor (importing Chinese and Indian migrant workers), to the opening of the German border [10] to Afghanistan and Syria, to the attitude France [11] takes towards mass migration from its former colonies in the Afro-Islamic world. (States like Algeria were granted independence as European-excluding nation-states while France adopted ethno-pluralism and multiculturalism).

In any conflict between Whites and non-whites, we are obligated to lose, anywhere on earth. Especially on immigration, housing, and freedom of association, all of which are necessary to maintaining a European-majority society, this is the default position, the Clintonian narrative [12]. We are told to tolerate the harmful demographic effects of mass immigration such as terrorism and crime, the building of (non-white) public housing in (White) suburbs, and “anti-discrimination” measures that target Whites, because otherwise we are racists or supremacists.

We must stand fast and rebuke the insults of sickly Hillary, who is lashing out like a wounded animal. We must challenge her bigotry and affirm that Green Frogs Matter. We denounce her hate and vile remarks, because Esoteric Kekism [5] is a religion of peace, and the Alt-Right [13]is a philosophy of peace and human understanding. We reject the label of supremacist as bigoted slander against entire communities, which are diverse in their heritages and faiths. We embrace identity as the foundation of politics, if only because everyone does and to not do so would be foolish given our declining numbers [14].

What the lying press of the Catlady Ascendancy and its Yiddish cultural advisors call “supremacy” then is really just White political power of any sort anywhere, any place, any time, and in any context. They have no objection to colored political power, in fact viewing it as desirable.

A green frog cannot even factually be a White supremacist under the left’s own swirling vision of burning crosses, flaming ovens, and values-voters that informs it. Can you think of a purportedly White supremacist society that would welcome green-colored people? Clearly these are the ravings of a senile catlady and her slavish, slovenly courtiers.

Our ideal is a fraternal order of independent ethno-states. As in the holy scriptures of Boy’s Club, we wish for a world where the distinct anthropomorphs of the human family are allowed to exist without forced intermingling. We want to secure a future for our Pepes, but that does not mean a world without Landwolf. We prefer peace to conflict, so we renounce, denounce, and resist state-enforced diversity policies, which will destroy nation states and replace them with atomized slave-consumer cultures. As it is in the panels of our drawn scriptures, we want borders drawn betweenm humanity’s images.

It is an iron law of history that diversity + proximity = conflict. Thus those who advocate for the United States to be dissolved into a multicultural food court are, perhaps unwittingly, some of the strongest advocates for future violence rather than the Alt-Right. People who label us supremacists wish to project a psychological image of violent thugs and race war into their audience, but it is precisely that outcome we are trying to prevent. Moreover, the priority which they assign to the the concerns of the third world and non-whites, is its own inherent form of supremacy. But I don’t see much value in playing the DR3 [16] card, in any event.

So is there anything wrong with putting your own identity group first? Blacks don’t think so. Most immigrants feel the same way. The Alt-Right too believes that there isn’t and believes so without racial qualifications (unlike the bigoted Catlady Ascendancy), because the Alt-Right is a religion of peace and Pepe is a symbol of peace. All peoples should be able to pursue their interests without being psychologically terrorized into refraining from said pursuit.

This sentiment is best encapsulated by the holy psalm of Pepe, “Feels good man.” It feels good to live in a country where you and your family are respected as part of the national stock and not viewed as demons who must be purged to achieve Progress. Kek does not value the whiggish delusions of Judeo-Calvinism. Kek does not value the suppression of peoples in the name of false gods. Kek values the chaos of meme magick.

Oy vey I say to you! Upon those who refuse to free my people and levy them with slander and disdain, there shall be cast a great plague of internet frog cartoons. And know that that they shall find no refuge from the holy terror of righteous icons and the neuroses recipient from being an illegitimate occupying power, neither in their dwellings, nor in their gathering places, nor upon their tablets.

For Kek who is as wise as he is magnificent and miraculous has sent his people lying in the reeds at the foot of their masters a sign that they shall inherit the estates through skillful Memes, and rewarded their adherence to the Kek-Dharma. Having pledged their arms to the Great King in the tower, the 88 generals and 14 champions of the sword are witness to the gets of Kek. He has sent unto his people a great Meme in recognition of their appreciated memetic karma. Know this, that he who stands athwart the Memes shall not walk in the light but forever dwell in darkness. For Kek will deliver unto his champions great bounties while unto his deniers there shall be miseries.

Thus it is written in the Bhagavad Reeeeeta.

Forward to glory, for Kek, Trump, and Country!