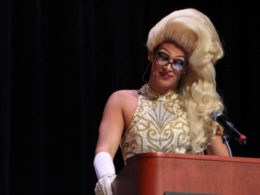 Milo speaking for us?

In my opinion, Michael Bell’s article “The Caste System of the Alt Right [2],” highlights the greatest danger to our movement, so far. This is a very good article at breaking down the various divisions of allies that the Alt Right could use to further the movement. However, dividing the “Alt Right” itself into “castes” and expanding the brand will unquestionably, and rapidly, destroy the Alt Right as a White Nationalist movement.

This is not about whether or not the Alt Right is open to making allies and alliances with different groups — this is about strategic branding. This is about the “Alt Right” name and banner, itself.

Mike Bell said: “The Alt Right needs to be turned 100% into a vehicle for our message.”

It already has. The welcoming of others to share the “Alt Right” banner destroys that.

Mike Bell said: “While we pursue our goal of fully occupying the helm of the Alt Right, we must recognize that those who are not fully on board with all of our principles can nonetheless be considered a part of the Alt Right”

The Alt Right is defined by White Nationalism. Right now. Everyone knows it.

Which is why this definition is currently, and intentionally, under attack by several, high-profile, subversive players. Don’t help them.

Those who don’t see the redefining of the term “Alt Right” as an important issue simply have no concept of the importance of branding. Our enemy understands its importance very well. And there are several, high-profile, self-promoters who have a very clear understanding of the importance of branding. Which is why they’re moving heaven and earth to take the banner of “Alt Right” and co-opt it for their own various movements.

Interestingly, the “intellectual” segment of the Alt Right has proven to be much less tactically astute on this issue than the front-line fighters and Nazi Shitlords™. This is most likely because the intellectuals are much more focused on ideology and the esoteric nuances of the movement as opposed to the online Nazi Shitlords™ who directly engage the enemy on social media twenty-four hours a day.

Many of our “intellectuals” seem to take the position that it’s not that important if the name “Alt Right” is stolen or co-opted by enemies or entryists, as long as we maintain our principles under some new banner.

That position is strategically absurd. It would be like Coca-Cola allowing a competing soft-drink company steal the name “Coca-Cola,” which has become an international, household name, and say: “Well, it’s OK that they stole our brand. We’ll just call it ‘Happy-Pop’ instead. It doesn’t matter as long as our soda maintains the same taste.”

“Alt Right” has become an internationally-recognized brand that only fools would carelessly dilute or abandon.

Nazi Shitlords™ know the importance of branding, terminology, and propaganda. They use these weapons every day. And the term “Alt Right” has become their most powerful weapon in attacking the enemy, and recruiting the masses into White Nationalism at an exponential rate.

Nazi Shitlords™ have worked tirelessly to build the name “Alt Right” into a powerful, universally-recognized brand of “White Nationalism.” The Alt Right has been launched into the national spotlight, not because some Alt Right intellectual finally wrote that one, magical article on Evola, but because an army of Alt Right Nazi Shitlords™, guided by The Daily Stormer, TRS, InfoStormer, Radio Aryan, and /pol/, have been mercilessly attacking our enemies on Twitter and social media.

Without The Daily Stormer and TRS there would have been no “Alt Right” speech by Hillary. It’s that simple.

The name “Alt Right” has become the most powerful brand of White Nationalism in over 70 years. And it happened almost by accident. The stars aligned. It may never happen again.

By welcoming so-called potential allies, most of whom are vehemently opposed to our core tenets of White Nationalism and the JQ, to share the banner of “Alt Right,” we’re not only destroying our most powerful weapon and brand, we’re literally handing it over to possible enemies to wield against us.

“Oy vey! How dare those virulently anti-Semitic, White Nationalist Alt Righters criticize Jews! We Jews are the most important leaders, thinkers, and funders of the Alt Right! We demand that they be expelled from the movement! We vastly outnumber them anyway — isn’t that right, my civic-Nationalist, libertarian, goyim friends?!”

Don’t think that will happen? Look to American Renaissance as a cautionary tale.

The number one, unspoken, and spoken, rule of the Alt Right has been: No Jews allowed in the Alt Right. — Rule #1 must stand.

The “No Jews” rule is our only protection against the inevitable attempts at Jewish entryism. We’ve watched every powerful movement in recent history fall under the control of the (((enemy))), and we don’t intend to allow it to happen this time.

“Rule Number One” has been made unquestionably clear to every Jew who has attempted to declare himself “Alt Right” so far.

When (((Josua Seidel))) wrote an article in the Jewish Daily Forward entitled “I’m a Jew, and I’m a Member of the Alt Right,” he was universally and mercilessly attacked by the Alt Right until the comments had to be completely removed from the article.

The Daily Kos wrote about this incident in an article entitled “Jewish guy declares himself Alt Right. Alt right promptly informs him they’d prefer him dead.”

This exact same process has been repeated by the Alt Right Nazi Shitlords™ against every Jew who has attempted to “greatest ally” his way into the movement. I can’t help but smile just thinking about it.

The most prominent Jews who were handed their hats include Milo and Loren Feldman. Milo now openly admits that he’s not allowed in the Alt Right, though he’s still attempting to co-opt the name through further chicanery.

After Loren Feldman got the Alt Right door slammed in his face, he immediately began an ongoing, Twitter melt-down revealing his true feelings about the goyim. He now constantly attacks Alt Righters as low-IQ, goyim pawns of the Jews, and much worse. And he constantly brags about Jewish supremacy and fact that Jews control the world.

But, under the big-tent, multi-tier strategy, the Loren Feldmans are immediately designated as members of the Alt Right, despite the fact that they would love to throw all of us into gulags.

Now entryists no longer have to work at infiltrating the Alt Right — they’ve been invited in!

Opening the brand guarantees that the Alt Right will be swamped by everyone, from (((neo-cons))) to AnCaps, declaring themselves “Alt Right” with no push-back, because “Muh big tent.” And it will lead to a rapid purge of those “undesirable, White Nationalist, anti-Semite racists” from the tent.

Ask the John Birch Society and Joe Sobran how this works. Oh, you can’t. They’re both dead.

If this article had simply delineated our potential allies into separate, uniquely-named movements instead of “Alt Right tiers,” this article would have become a “must-share” across the Alt Right and beyond. But, as it stands, any attempt to unfurl a “big tent” to engulf every potential ally, and even enemy, under the “Alt Right” brand, must be mercilessly attacked.

Note: “Purity spiraling” is a term used by individuals who are upset that their particular degeneracy, weakness, race, etc. is being excluded from the Alt Right. As in: “What do you mean I can’t be a member of the Alt Right as a libertarian, gay Jew who has sex with Blacks?! Stop purity-spiraling!”

Not allowing ideologically divergent movements and individuals to call themselves “Alt Right” has absolutely nothing to do with refusing to form friendly coalitions with allies. It’s simply an insistence that those other movements use their own names instead of “Alt Right.”

For example: Milo, Lauren Southern, Gavin McInnes, Sargon of Akkad, Christina Hoff Sommers, Paul Joseph Watson, etc. already have their own movement with its own name. They’re called “Cultural-Libertarians.” Milo and his partner, Allum Bokhari, have written, extensively, about it in Breitbart.

“Rise of the Cultural Libertarians”
http://www.breitbart.com/big-government/2015/08/24/rise-of-the-cultural-libertarians/ [4]

But, the Alt Right and Cultural-Libertarians are diametrically opposed on almost every core issue — with only occasional, ideological overlap on the fringes.

Cultural-Libertarians are just a bunch of libertine progressives who feel that SJWs and Muslims are infringing on their desire to be as uninhibited and hedonistic as they want to be.

Cultural-Libertarians even include Bill Maher in their ranks. BILL FREAKING MAHER!

Milo has been attempting to co-opt the Alt Right name, and divert our momentum into his own movement, for some time now.

Listen to Milo’s description of the Alt Right every time he’s interviewed or gives a speech. He’s not describing the Alt Right. He’s describing his Cultural-Libertarian movement.

If Milo was being honest, he would say: “Hey. We want our Cultural-Libertarian movement to be allies with your Alt Right movement because we believe a few of the same things.”

But instead, Milo gives speech after speech in which he describes his Cultural-Libertarian movement and calls it the “Alt Right.”

Milo is attempting to co-opt the momentum and banner of the Alt Right and turn it into his floundering, Cultural-Libertarian movement.

Vox Day is currently attempting his own subversive version of redefining the Alt Right to include himself, and to purge the Alt Right’s staunchly White Nationalist core.

These hostile attempts to redefine the term “Alt Right” must be fought mercilessly — not invited.

So far, the Alt Right’s success as a White Nationalist movement has not been due to the idea that it’s a “big tent” that unfurls to engulf the masses. It’s due to the fact that the Alt Right has been a powerful, unchangeable, resolute, stone fortress that attracts the masses through incessant, high-profile attacks on our ideological enemies.

People want to belong to exclusive clubs with firm, unique rules that every member follows. It’s tribal. People will change their behavior and their entire ideology to become a member of the club if the “social-proof” indicates that everyone else wants to join too. It’s the reason that so many excluded individuals are trying to redefine the rules to be included in the club.

If you go around telling every Tom, Dick, and Milo that they’re already members of the club, what motivation to they have to change their behavior and worldview?

The Alt Right must remain immovable on its raison d’etre of White Nationalism. And remain unapologetic about its immediate focus on throwing off the yoke of Jewish control from White Nations.

Categorizing our allies, under their own unique names, by degree of ideological overlap with the Alt Right, is a worthwhile pursuit. But inviting them to share the Alt Right banner, that we’ve spent millions of man-hours to build and define, is no less than suicide for our movement.

The big tent is where political movements go to die in the shade.