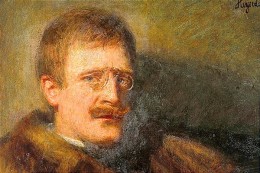 [1]Knut Hamsun was born Knut Pedersen in Lom Norway on August 4, 1859. He died in Grimstad, Norway, on February 19, 1952. The author of more than 20 novels, plus poems, short stories, plays, and essays, Hamsun was one of the 20th century’s most influential writers. His rejection of both Romanticism and naturalism, his emphasis on outsiders and rebels, and his exploration of inner and sometimes extreme states of consciousness, made him a pioneer of literary modernism. He received the Nobel Prize for literature in 1920. (1917) is his longest but most accessible novel; it won him the Nobel Prize. Hamsun’s breakthrough novel is Hunger [10]

(1890), which is one of the most unsettling books I have ever read — up there with Mishima’s best work. Other highly recommended shorter, early novels are Mysteries [11]

As a young man, Hamsun spent four years in the United States, which gave him an abiding distaste for Anglo-Saxon culture and capitalism — convictions that were hardened during the Second Boer War. See Knut Hamsun Remembers America: Essays and Stories, 1885–1949 [13], ed. and trans. Richard Nelson Current (Columbia: University of Missouri Press, 2003).

For a biography of Hamsun, I highly recommend Robert Ferguson, Enigma: The Life of Knut Hamsun [14]