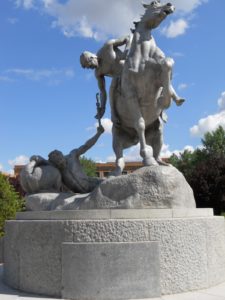 The ‘Right to Life’ is up there as the most basic of Human Rights. Now, I don’t believe in ‘Rights’ as anything except ‘stuff people want the state to guarantee’, but let’s roll with it for a second. You get born, have parties, and die. Maybe you’re like the Batman, and your parents get killed, and life is generally weird and shitty. Maybe you get born as Donald Trump or some kind of muslim war hero and manage to create a legacy that outlives you. But even this limited amount of information is quickly snowed under by how much stuff happens historically. Your individual ‘Right to life’ quickly becomes immaterial. OK, the parties were fun, and you didn’t get killed in some horrific war. Is that it? What next? What then?

The ‘Right to Life’ doesn’t mean much without the right to raise a family. Or more broadly — the right of self-perpetuation, the next step after subsistence and survival. The right to be more than an individual. The right to ‘start something’ — but instead of some shitty kickstarter, something actual, factual and with tooth and bite — a little clan. A folk or people. A group of kith, kin, warriors and townsfolk that endures beyond a snowflake-like existence of tumblr gifs and facebook selfies. A genetic group that throughout time gradually evolves, perpetuates, and has the same types of faces and same types of personalities recur throughout history.

Most men dying in conflict did so because they cared less about their Right to life as an individual and more for the social order, structure and nation that gave them differentiation; that was their own clan and separate people with distinction and identity. The Right to Differentiation if we’re being fancy, or the Right to be a Separate people, the right to self-segregate from an amorphous “humanity” and be part of a group that endures. [2]Fully-abled people who want to kill themselves are neurotic or depressed; they lack so much self respect they see their mere existence as a blemish on this world. Those who sees even a scrap of value in themselves wants the Right to Life as a basic so they can chase their idea of goodness. The Right to a Group Territory is just the next step. Instead of being reduced to being ‘just an individual’, have the self-respect and bravery to acknowledge what you are and where you came from — a lineage, a nation; a collection of self-sacrificers who, on the whole, wanted the best for you and frequently fought for it. Those with a scrap of self respect, if they’re being honest, also have to admit respect for those that came before them and a respect for the families they can create and support.

That means having a degree of racial pride, in the genetic uniqueness that defines you, something paid for in blood. Self-respect means acknowledging you’re not ‘just an individual.’