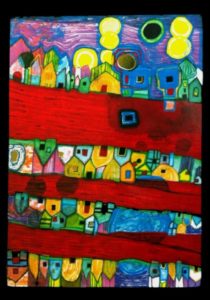 Streets Running with Rivers of Blood

Rotherham, England is in the news again. And for all the reasons you would expect.

Yes, the Muslim “grooming gang” problem still exists, although now more people are chattering about now than before. It remains to be seen whether this chattering will do any good, but it certainly is better than not chattering about it. For decades it was taboo even to discuss what was going on. And what was going on? Savage Muslim men, mostly from Pakistan, the Middle East, and North Africa, were raping and selling into sexual slavery tens of thousands of white British girls.

They’re organized and well-funded, and they take full advantage of a society that either religiously exalts multiculturalism or is too afraid to speak out for fear of being labeled “racist.” Indeed, for many years, the British press and police have been loath to deal with such a thorny issue, preferring to have thousands of girls and their families suffering in silence.

For an excellent primer on this shameful and horrific story, refer to Easy Meat: Inside Britain’s Grooming Gang Scandal by Peter McLoughlin [2]. We should keep in mind that while Rotherham makes the headlines, grooming gangs exist all over England. Mr. McLoughlin does invaluable research [3] into the breadth as well as the depth of this problem.

So what has changed? Not much. According to a recent express.co.uk article [4], another investigation has uncovered “shocking” examples of sexual abuse in Rotherham. Of course, what’s really shocking is that fact that any news outlet would find this story shocking at all. It’s been going on under their noses for 25 years. Why is it shocking? Of course Muslim men behave this way. They oppress women and girls in their own countries and have been doing so for centuries. Then when they come to civilized nations, they import their sick behavior along with them. None of this should be shocking, especially to members of the media whose job it is to keep tabs on this sort of thing.

I am, however, noticing a couple new twists. One, the British media is now referring to the culprits as “Kashmiri or Mirpuri.” Apparently, they don’t wish to offend “mainstream” Pakistanis living in England who are “disgusted by the actions of a few men from those communities.” On one hand, this is a step up from the less-descriptive “Asian” moniker the press used to give these criminals. On the other hand, the members of the English media are still too frightened to deal with the cultural and racial elements of this problem and therefore refuse to call these people what they really are: vicious Muslim savages. Essentially, these grooming gangs are following fairly mainstream tenets of Islam as outlined in the Koran. Mr. McLoughlin covers this quite extensively in chapter 7 of Easy Meat.

More importantly, these gangs consist mostly of Muslims from Pakistan, the Middle East, and North Africa. Muslims from Eastern Europe or East Asia, not so much. Therefore, although Islam does not help the situation, it is not the prime cause. The prime cause can only be race; there must be something about the genetic makeup of these people that compels them to abuse women and girls. Of course, such a possibility remains verboten to discuss in the mainstream media on both sides of the Atlantic.

Another twist is claiming that “mainstream” Pakistanis in England are appalled by these grooming gangs. It is so hard not to descend into nasty sarcasm here because for years the Muslim communities in England have known about these criminal activities and said nothing about it. In fact, Muslim members of Parliament and other community leaders have in the past spoken out against whistle-blowers, and condemned anyone who opposed these gangs as racist. Some even called the whole thing a hoax. So, now, all of the sudden, “mainstream” Pakistanis in England are “disgusted” by these grooming gangs? Are the people working in the British media this naive? Or are they carrying water for these so-called “mainstream” barbarians who, in effect, look the other way, when members of their communities ruin the lives of thousands of white girls?

Still, the additional attention is good. Stories like this one should dominate the news every day. And in case we forget the urgency here, let me share a few quotes from the expresss.co.uk article, but definitely read the whole thing:

One victim, who we have called Ellie to protect her identity, said: “Raping of white girls by these men is still going on. Some, I know, have had to wait months before they’re even asked to give a statement [to the police].” . . .

The investigation — called Operation Stovewood — is currently probing more than 7,000 lines of inquiry. . . .

But Ellie said: “What have the National Crime Agency been doing for the last 18 months with their £10million? No arrests yet? We’re feeling desperate and disheartened.”

The article goes on to describe how packs of these Muslims intimidate girls and their families into keeping mum about their crimes. It also describes the frustration and heartache the victims feel when the police are less than supportive. I would compare these grooming gangs to the Sicilian Mafia, but I’m sure that would only disparage members of the Sicilian Mafia who are positively benign in comparison.

Another telling moment appears in the article’s conclusion:

Rotherham Council Leader, Cllr Chris Read, added: “Tragically there will always be criminals who want to hurt vulnerable young people, and we know children are still being exploited in communities up and down the country, including in Rotherham.

“We know too that in the past there were serious failings in Rotherham. But the way we deal with child sexual exploitation today is very different than in the past. We have heard from victims and survivors who have directly informed our response — we are listening, and taking action alongside the police and other partners to keep young people safe, to disrupt offenders and to secure justice.”

Does anyone else sense the cowardice and capitulation in Mr. Read’s statements? First, he claims that there will always be “criminals who want to hurt vulnerable young people.” While technically correct, the criminals in this case aren’t merely “hurting” young girls. They are raping them and enslaving them as prostitutes and threatening their families and gaming a corrupt and lenient system to get away with it. Isn’t the truth just a little more sordid than how Mr. Read was letting on?

Also, he claims this state of ubiquitous criminality will always be around. But he doesn’t explain why England never really had a problem like this before the Muslims came in large numbers.

Then he claims that “the way we deal with child sexual exploitation today is very different than in the past.” Why? Because the new approach works so well? Seriously, what he is really saying here is that current law enforcement is hampered by political correctness. Therefore, we need to manage our expectations of when this problem will be solved.

Finally, he claims that the role of police is to “disrupt” the “offenders.” What exactly does that mean? One can merely “disrupt” offenders, and yet they can keep on offending, no? That’s a pretty softball interpretation of law enforcement, don’t you think? What ever happened to imprisoning offenders? Or how about deporting them? Or maybe even hanging them? Wouldn’t that also “secure justice?” If so, then why didn’t Mr. Read just say so?

This is the reason why people loathe politicians. They promise hope and change, but they secretly adhere to the status quo. Their statements tell us as much as long as we put in the work to parse out the subtext.

It’s like the bad guys are winning here. The police lack the will to protect their citizens, the press refuses to pin the blame on the criminals, the politicians pretend to care, and the victims are left out to dry. Seriously, what is the downside to being part of a Muslim grooming gang these days? They certainly make enough money. According to researcher Julie Bindel as quoted in Easy Meat,

This is not Gotham City, but it sure feels like it, doesn’t it?

And it is only worse than it seems since a substantial fraction of the victims never go to the police at all [5] fearing being labeled a racist or being attacked by crazed Muslim pedophiles or, in some cases, being separated by their families by social services. Talk about being stuck between a rock and a hard place and another hard place:

Victims said there is a feeling that social services prioritise taking children away from mothers. . . .

And now an investigation by express.co.uk has established that senseless officialdom could be deterring hundreds of girls still suffering abuse at the hands of the grooming gangs from coming forward to speak about their ordeals. . . .

One victim, who now works with girls subjected to abuse, revealed that “about 25%” of the victims she knows are refusing to go to the police over fears that social services will take away their children.

Despite this, things seem to be moving slowly. The Independent Police Complaints Commission in England has been delving in to the issue of police negligence [6]. They’ve identified 60 officers and possibly could snag 100 more. If we can’t nab the perps so well, at least we can light a fire under the cops and make them feel some of the heat the young girls of Rotherham have been feeling for years.

This is a start, of course. I don’t want to be so cynical as to dismiss such a measure as useless. Maybe it will do some good. However, in order to effect real change, that is, to end the problem, an entire paradigm shift in the attitudes of white people will have to occur. We, as victims, will have to recognize the racial and genetic aspects of the situation. Judging from their record, which stretches back over a millennium, Muslims from North Africa, the Middle East, and Pakistan tend to act barbarously. Given that they have had access to the West for decades now and have done very little to reform, we must assume that this is how they are. They cannot help it.

Once we accept this, then it logically follows that, except in rare cases, they don’t belong in civilized societies. They need to be deported forthwith. And the sooner the better because with more of these people, the problem will only become bigger and more intractable. Deporting them now will be better for them, and, more importantly, it will be better for us. This and only this will solve the problem of grooming gangs and other instances of anti-white abuse occurring in our own backyards. It will also prevent the wide-scale violence and warfare which will happen once these people reach a critical percentage of our population and start normalizing behavior which today we deem criminal.

This is not a tolerable situation. We need to tell our leaders to stop pretending like it is.