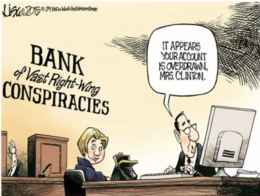 [1]Just like I suggested the proper way Trump should have responded to the DNC attack by the alien NEC Brown Star family, I now suggest — this time in advance — the proper way for Trump to respond to Hillary Clinton’s scheduled Thursday attack on Trump’s supporters in the Alt-Right.

Of course, his response should in part depend on what the harridan actually says, but his riposte should include something like this:

The fundamentally dishonest Hillary Clinton is trying to distract the American people from their very real problems by unfairly mischaracterizing a group of people who are among my supporters. Crooked Hillary can smear me and these people all she wants, but the truth is that these folks she attacks are decent Americans — American citizens — deeply worried about the direction of our great country.  And they have a right to be worried, and to be even more worried about what will happen to America if my opponent is elected.

Maybe if Hillary would worry more about the very real worries of honest, law-abiding American citizens, instead of worrying about illegal immigrants, Syrian refugees, and how to cover up her scandals and frauds, she would know why so many Americans are worried — worried AND angry — about the direction America is headed.

Hillary Clinton can say whatever she wishes, but the American people will not be fooled. And even though I do not agree with all my supporters on everything they say or believe, I’m not going to throw my own supporters under the bus. Maybe if the Establishment had done a better job listening to the American people, there wouldn’t be so much anger and division in this country, after eight years of Barack Obama’s failed Presidency.

Etc. Etc. Etc.  Some variation of that would work well — defuse the attack while maintaining the respect of Trump’s core supporters.

By the way, the idea that a “pivot” is required is pure stupidity. Trump’s problem has never been his original hard-line on immigration. After all, he was very tough on immigration at the RNC, and came out of that in good shape. His hard-line didn’t hurt him when he was doing better at the polls. No, his decline has more to do with his Twitter buffoonery more than anything else. It’s Trump the man who needs a pivot, not his immigration policies.