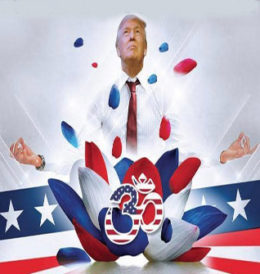 On the fourth night of the Republican National Convention, presidential nominee Donald J. Trump gave an unheard of, albeit leaked, 75-minute speech. I watched most of it, but like many people of my generation, my attention was divided across multiple screens. From my television set, the voice of the authoritarian populist some consider to be literally Hitler blared through my quarters. I would get up every so often to put out a tweet or leave a comment somewhere on my desktop computer in another room. On my phone I was messaging non-movement friends, asking them if they were watching Trump get one step closer to being memed into the White House. They don’t know I was quoted about memes in the New York Times. As the man himself would say, “It doesn’t matter.”

There has been and will continue to be a lot of shvitzing over this speech, perhaps genuine analysis in some circles. There will be the perennial criticism of Trump for not providing a wonkish thirty-point plan of action as to what he would do, specifically, as president. And there will be the hysteria that he is going to destroy everything our enemies value in this country. This speech was not about sitting down at the table and crafting an agenda and plan of action, nor was it about assuaging the fears of his enemies. What Trump did was far more important, he created the frame of a nation marching to its doom [2] and painted himself into it as the deliverer of rebirth and salvation. He will wade through the rivers of blood that others are content to watch flow by, so his speech signals.

Dwarfed by a towering curtain of American flags, the 6’2-tall Trump described the most powerful state in the world as one in immense peril and overrun by banditry. “The attacks on our police, and the terrorism in our cities, threaten our very way of life. Any politician who does not grasp this danger is not fit to lead our country,” said a stern Trump while taking a dig at his adversary. “I have a message to every last person threatening the peace on our streets and the safety of our police,” he added, “When I take the oath of office next year, I will restore law and order to our country.”

Not if, when. One thing many critics will miss from zeroing in on the fire-and-brimstone is the strong positivist girding of Trump’s speech. The way he presents it, the issues facing the United States will be resolved, and they will be resolved by him. They are not something to be mourned over or met with platitudes. The triumph over them will not be hypothetical, because the leader has already visualized victory. This is radically different from how an ethno-masochist politician like Clinton, or France’s ideologically aligned Manuel Valls [3], would approach existential threats to the nation, and certainly different from the detached colonizer attitude of Obama, for whom the United States is a resource and not a homeland. Trump will destroy “every last person threatening the peace,” or make them bend the knee. Others will attempt to manage the reaction to it, for their sympathies are with the enemy.

Security—intrinsically woven into prosperity—was the central theme throughout Trump’s speech. “The most basic duty of government is to defend the lives of its own citizens. Any government that fails to do so is a government unworthy to lead.” Trump sees America as an illegitimate and failed state—one that requires revolutionary and restorative change. His path to this goal is to control the border, which will end the national crime of illegal immigration and the migration of peoples fertile for Islamic terrorism into our homeland. In reference to the death of 21 year-old Sarah Root in a car accident caused by an illegal mestizo immigrant, Trump condemned the government’s failure to secure the border: “But to this administration, their amazing daughter was just one more American life that wasn’t worth protecting. No more. One more child to sacrifice on the altar of open borders.” A sacrifice on the altar of open borders—the blood of young woman spilled in the name of racial egalitarianism, and the birth of a nation.

Or more accurately, the rebirth of a nation. Trump positions the election as a referendum on the restoration of the American people to their rightful position, first in their own country and first before their government:

A change in leadership is required to get a change in outcomes. Tonight, I will share with you my plan of action for America. The most important difference between our plan and that of our opponent, is that our plan will put America First [4]. Americanism, not globalism, will be our credo. As long as we are led by politicians who will not put America First, then we can be assured that other nations will not treat America with respect—the respect that we deserve.

A nation which puts other nations first is, of course, not a sovereign nation. A vote for Trump becomes a vote for American sovereignty while a vote for Clinton becomes a vote against the nation, a vote against one’s own people. Trump sees this as a faction which must be crushed, one we will enjoy crushing, and one that will be crushed by the collective and triumphant will of the people.

It’s time to deliver a victory for the American people. We don’t win anymore, but we are going to start winning again. But to do that, we must break free from the petty politics of the past. America is a nation of believers, dreamers, and strivers that is being led by a group of censors, critics, and cynics.

Remember: All of the people telling you that you can’t have the country you want, are the same people that wouldn’t stand—I mean, they said Trump doesn’t have a chance of being here tonight. Not a chance! The same people. Oh, we love defeating those people, don’t we? Love it, love it, love it. No longer can we rely on those same people in politics and in the media, who will say anything to keep a rigged system in place. Instead, we must choose to Believe In America.

The message is chilling for enemies of the American people: Trump will break the chains of globalism and political correctness to restore the nation, and drive out of power those who brought anarcho-tyranny upon us.

Normies do not like anarcho-tyranny. It doesn’t make them feel safe. They don’t want a society where blacklivesmatter terrorism [5] and Islamic terrorism [6] are in the news every few days. They don’t want a society where separate standards are used for illegal immigrants and citizens, with the former being coddled by anti-American administrations as our economic replacements and perpetual victims. They don’t want the state to strip them of their right to bear arms while criminals, who are inherently lawless, acquire them to use for violent purposes. Gun manufactures always do well [7] after anarcho-tyrannical events are allowed to happen by the government. Trump speech hits normies right in their lizard brains and fulfills the desire to be safe.

Trump relies on his personal projection of power to make the case he can protect America from its foreign and domestic enemies. And it seems clear he will be taking a non-congressional route, that of the presidential fiat—executive orders. His law and order is not a separation of powers or a division of federal and state government, it is an authoritarian populist conception of power as granted through mandate. Whatever power is necessary and available will be used. On immigration, whether from “terrorist countries” or anywhere, Trump actually has the lawful authority to let in, or block, whoever he sees fit:

So yes, Huffington Post, he can ban immigration from the entire Muslim world if he wanted to. And he does. He could even extend it to Latin America too if need be. I mean, they have that drug cartel problem don’t they? The Overton window calls.

Trump must be one of two things: either he fulfills his positivist prophecy and saves the Republic as a messianic Caesar, or as the lying press would have us believe he will completely destroy America in every way—economically, diplomatically, morally, ideologically, militarily, socially, entirely. On the one hand we have the heroic figure, Trump the Redeemer, who will bring America back from its impending Doom, entirely at a cost to himself without asking anything more of us than to support him as the champion of the people. Whether or not America can be saved depends on who you ask. On the other hand, we have Trump the Destroyer, who the left fears would bring about ruin the likes of which this world has not seen in generations. I cannot help but look towards either outcome with a sense of optimism—for if Trump cannot save the United States and reverse our biological decline [8], then the sooner the occupation government [9] is dissolved the better.

The establishment left fears the loss of their most powerful institution greatly, which means we can only look forward to it. Whether it is lost through transformation or destruction then is of no importance. If he does bring about the ruin of the United States, then Trump is an avatar of Kalki the Destroyer, who will clear the ground for the construction of a new Age of Truth and bring about an end to the current cycle, for we know empires are cyclical. We will either take back the American Dream, or burn it.