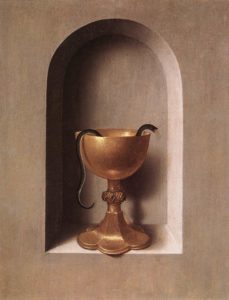 Did Jesus Christ die on the cross at Golgotha to atone the sins of humanity, offering redemption to all who believed in him? Or was he a heretic Jew who attempted to reform Judaism so as to strengthen the Jewish in-group, which obviously was weak due to infighting and bitter acrimony among traders on the market squares of the Levant?

When Christ gave a sermon he was giving psychological advice to other Jews to help them become more efficient, with the hope that they would learn to love one another as brethren of the same Jewish God.  His apostles were all Jews who helped collect money from Jesus’ adoring fans. He promised Jews at the bottom of the social ladder a place in heaven, which, as beggars and lepers, they had been denied.

When Jesus advised: “turn the other cheek,” he was asking Jews to forgive one another, going against the maxim: “an eye for an eye, a tooth for a tooth.” When he preached: “love thy neighbour,” he meant “love thy Jewish neighbour.” When he exclaimed: “God is love,” he meant “God loves the Jews.”

His rock-star touring infuriated the Sanhedrin, the old rabbis, the money lenders and the malicious traders, who loved hating one another. So they arranged for him to be pinned to the cross.  The Roman legionnaire guarding him was a mere piece of furniture, a soulless gentile. Jesus, drunk on wine, babbled to the thief next to him, a fellow Jew, that he too would have a place in heaven. Jesus appealed to the lowest elements, offering murders, rapists, sodomites and tyrants a place in Jewish hocus-pocus land.

In essence, Jesus was the precursor to Karl Marx, only his proletariat was the Jewish poor.  Hence:

Then said Jesus unto his disciples, Verily I say unto you, That a richman shall hardly enter into the kingdom of heaven.

And again I say unto you, It is easier for a camel to go through the eye of a needle, than for a rich man to enter into the kingdom of God.

If Jesus was the first Marx, then the Apostles Peter and Paul were the first Lenin and Trotsky, spreading the new cult among gullible gentiles in Greece and Rome. The religion spread like wildfire, as it promised the impossible to slaves, harlots and catamites: redemption, and a first-class reservation to a better afterlife.

Fortunately, Christianity evolved as an in-group religion and helped strengthen and reinforce the faith of communities, nations and the white race in general. For the German: “love thy neighbour,” meant “love thy German neighbour.”  “God is love,” meant “God loves the Germans.”  And so it was throughout Europe, until the mid 19th century, when a Godless form of Christianity emerged, Marxism. It appealed only to the worst elements, genetic losers, and Jews, who saw an aperture in which they could sneak through and reach the top of society.

In 1917, Marxism replaced Christianity, for 73 years, as the only religion in Russia, with tyrannical Jews at the top, promising the goyim earthy paradise, but in truth masterminding hell on earth: executing the genetically superior, organic elites, the Russian nobility; sending millions to Gulags; terrorizing and starving to death the peasants of the Ukraine.

In the first half of the 20th century, Christians were united against communism; the Church supported in-group nationalistic thinking. During the Spanish Civil War, in the late 1930s, thousands of priests and nuns were tortured and murdered by the communists; altar boys were sodomized on a daily basis. The Church was a defender of the people.

After the collapse of an in-group minded Europe in the decades following World War II, Christianity and a new form of communism merged, cultural Marxism, with in-group theology being replaced by osmosis with south-American liberation theology.  Popes John Paul II and Pope Benedict XVI were the last defenders of in-group Christianity, and were sternly opposed to liberation theology.

The Papal inauguration of Francis, a proponent of liberation theology, marked the beginning of the age of the devil, as he would later invite African and Middle Eastern “refugees” to come to Europe where he would wash and kiss their swarthy feet.  He would preach to terrified white Europeans that they should welcome these Muslims in the name of Christ. He would point his finger at Donald Trump about building a wall.

The devil’s abode is every refugee camp, every place where innocent whites are gunned down, every housing project built for parasites. His many realms are the empty lots of Detroit, the derelict houses of Baltimore, the railway station in Cologne.