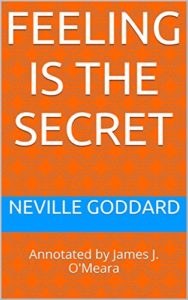 “This book is concerned with the art of realizing your desire. It gives you an account of the mechanism used in the production of the visible world. It is a small book but not slight. There is a treasure in it, a clearly defined road to the realization of your dreams.”

A self-taught mystic whose charismatic, British-accented presence thrived on the then-cutting-edge audio-visual lecture circuit, the man calling himself “Neville” (like Cher or Madonna) lectured every week on either coast to overflow crowds and even had his own TV show. Neville was post-war America’s own Alan Watts, only better; he distilled from Tradition something he modestly called “a simple method for changing the future” and taught it to everyone for free.

This Kindle edition includes an exclusive essay by James J. O’Meara which displays for the first time Neville’s roots in the hermetic magic expounded by René Guénon and Julius Evola.

Find out why Aleister Crowley’s private secretary, Israel Regardie, said that of all the so-called “self-help” systems he knew, “Neville’s is the most magical.”