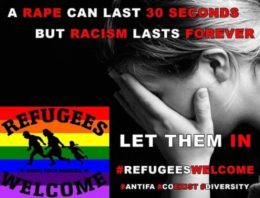 Leftists will accuse white men of fueling “rape culture” for sitting with their legs spread too far apart [2]. But they’ve been excusing non-whites for committing actual acts of rape since well before the mass sexual assaults in Germany in 2016. The Cologne attacks on New Years’ Eve didn’t represent the beginning of these trends—they just exposed to the wider public more clearly something that some of us have already been observing for a long time.

In 2010, for example, a liberal activist in Haiti wrote the following [3]:

Two weeks ago, on a Monday morning, I started to write what I thought was a very clever editorial about violence against women in Haiti. The case, I believed, was being overstated by women’s organizations in need of additional resources. Ever committed to preserving the dignity of Black men in a world which constantly stereotypes them as violent savages, I viewed this writing as yet one more opportunity to fight “the man” on behalf of my brothers. That night, before I could finish the piece, I was held on a rooftop in Haiti and raped repeatedly by one of the very men who I had spent the bulk of my life advocating for.

. . . I pleaded with him to honor my commitment to Haiti, to him as a brother in the mutual struggle for an end to our common oppression, but to no avail. He didn’t care that I was a Malcolm X scholar. He told me to shut up, and then slapped me in the face. Overpowered, I gave up fighting halfway through the night. . . . Not once did I envision myself becoming a receptacle for a Black man’s rage at the white world, but that is what I became. While I take issue with my brother’s behavior, I’m grateful for the experience. . . . Black men have every right to the anger they feel in response to their position in the global hierarchy, but their anger is misdirected. Women are not the source of their oppression; . . . the as-yet unaddressed white patriarchy which still dominates the global stage [is].

To recap, this woman was upset that women’s organizations were portraying black men as “violent savages” in order to try to receive more aid—but quite literally before she could finish writing out her protest, one of them holds her on a rooftop and beats and rapes her. Afterwards, the takeaway she carries away is that she is “grateful”  to have experienced the rage that ought to be directed at “the white world”—specifically, the “white patriarchy.” Ask yourself if you can imagine anyone—whether a liberal in some hypothetical future, or a “mens’ rights activist” today—excusing a white man’s act of raping a woman because he “has every right to the anger he feels” as a result of having his children taken away by an unjust family court system, and merely needs to be taught to direct it at better targets. Ask yourself what the outrage would sound like if someone did. This disgusting tradition of selective excuses of minorities for severe offenses like actual rape combined with harsh condemnation of whites and men for far more innocent actions has, however, recently hit peak visibility—even after the attempted coverup of mass sex assaults in Cologne on New Years’ Eve, a German refugee activist just admitted to having lied [5] to imply that the three Middle Eastern refugees who sexually assaulted her were white Germans because she didn’t want to fuel ‘racism’. A Norwegian politician took to the press to say that he felt sorry for his rapist [6] due to the fact that he was deported  as a consequence of it. An Eritrean migrant who sexually assaulted a woman in a car park and then violently resisted arrest was sentenced to a mere 30 days of community service [7]. A Swedish Left Party politician explicitly stood by the claim that rape is “worse” when Swedes (rather than migrants) do it [8].

Meanwhile, just after it was revealed that Omar Mateen, the mass shooter in Orlando, was not gay, did not frequent Pulse nightclub, and did not have gay dating apps on his phone—and that the early media reports making these claims were simply lies [9] intended to deflect attention from the real truths behind why this violence occurred—ISIS has actually instructed its members to specifically target white people so that their terror attacks aren’t mislabeled as ‘hate crimes’ by liberals again [10]. Meanwhile, while everyone heard the blatant lies repeated throughout the media that Omar Mateen was a repressed homosexual, far fewer will have heard any discussion about the fact that Mateen was actually radicalized by a member of the New Black Panther Party [11].

And speaking of hate crimes, Tommy Robinson in the UK was just accused of one [12] for carrying a sign that said “Fuck ISIS.” But screaming “I hate white people” and punching a woman’s tooth out [13]? That’s not a “hate crime.” That discrepancy is, of course, justified by the equation that “racism = power + prejudice”, and of course we all know that all and only white people have “power” and no non-whites have any at all — no matter how many Loretta Lynches, Benjamin Crumps, or Marilyn Mosbys there are; and no matter how many white people are getting their teeth knocked out or being threatened with jail for carrying signs. Do whites in prison still have “white privilege” once they’re already inside prison walls? Is it a “privilege” to be the victim of the vast majority of prison rapes — [14]perpetrated in the vast majority of cases by black perpetrators?

The fact remains that blacks continually and almost exclusively rape whites in prison. . . . Why does this white victim preference prevail? Whites continue to be raped more severely and frequently and at a disproportionate rate than any other racial or ethnic group (in Gones 1967; Bowker 1980; Lookwood 9180). This racial inequality may be the largest in any violent crime committed in the United States. . . . Sacco (1982, p. 91) has also noted a disproportionate number of black aggressors and white victims in studies of sexual assaults in jails and prisons. Even if the minority of prisoners are black, the minority of victims are white (Sacco 1982, p. 91). When Lookwood (1980, p. 28) asked ‘targets’ to identify their aggressors at the time of their rape, most were black (80%), some were Hispanic (14%), and a few were white (6%). . . . Although many causation factors have been suggested for prison rape, they are all overshadowed by the racial categories of the victims and the rapists. Prison rape has been shown throughout this study to be racially motivated by predominantly black inmates specifically against white inmates who in turn are the victims. . . . racial hatred of whites by blacks appears to be the main force driving prison rape [15].

For all the jokes [16] you’ve heard in the popular media about prison rape, have you ever once been informed that this has been a sociologically documented fact for decades? Of course not. You haven’t been informed about that by the mainstream media, and you haven’t been informed about it by the liberals and feminists complaining about prison rape jokes in the media, either. Is it a coincidence that a political Left made up of people who, after being beaten and raped, literally state that they’re “grateful” to have experienced the rage that ought to be directed at “the white patriarchy,” haven’t cared to inform you about this?

You know damn well that they’d be obsessed with pumping that statistic through the airwaves if it were reversed. For God’s sakes, the mainstream media is repeatedly obsessed with hoaxes that make the claim that some whites, somewhere, raped black women—the Tawana Brawley hoax [17] (), the Duke Lacrosse rape hoax [18]—even though:

Of the 13,463 reported rapes committed by black perpetrators in 2010, 50.2% of these were committed against white victims—and by contrast, the number of white–on–black rapes . . . reported in the NCVS surveys were so infinitesimal, that in each case whites were estimated to have accounted for 0.0% of all rapes . . . committed against black victims in the United States [19].

Well, “social justice” liberals will claim that rape happens because “Cis male entitlement [20] is embedded in everything in society . . . pop culture, media . . . Even while taking public transportation, you’ll always run into men spreading their legs and taking up much more room than they need.” But when rap contains lines like “I’ll cut your face off, and wear it while I’m fucking your mother [21]” (Black Vikings, Immortal Technique), the liberal response is that suggesting that this kind of content might play any sort of role in the black culture of violence is something only the most ignorant troglodyte could possibly even consider. T [22]his writer [22] tells us: “[Rap is simply] artistic expression . . . Yes, rap can be violent and angry, but that’s the nature of art.” Perhaps you think he’s right. Fine—but how the hell can anyone think he’s right and think that the feminists are right about rape being the result of men being given ‘cultural messages of entitlement’ which need to end at the same time?! You can’t.

Actually, Immortal Technique is so popular amongst leftists that Jill Stein even talked about asking him to ber her running mate [23] during the 2016 Green Party Presidential run: “I love Immortal Technique. He has great ideas—we need to hear from more people like him.”

Just try to imagine Immortal Technique rapping those lines on stage, and being celebrated for it, and then riding the train home and being condemned by the same people who were just pumping their fists to those lines for spreading his legs apart too far when he sat down on the train. Of course, the picture is too absurd to take seriously—but in fairness, after all, that’s not how it’s happening. They’re actually celebrating Immortal Technique after rapping lines like those on stage, and then condemning “cis”white men en masse for creating “rape culture” by spreading their legs apart too far on the train.

At least now we can see that it isn’t some perversion of the will to power amongst leftists who support those kinds of disgusting double standards because they think they have something to gain by marshaling non-white energy against whites—at least now we can see that they really do mean it, because now it’s plain for everyone to see that they’re literally taking non-white cocks violently forced into their own assholes and still feeling responsible and guilty at the thought that their rapists should be punished. Non-whites may support these kinds of double standards out of some sort of rationally calculated self-interest, but it’s safe to say that it’s now been established beyond any credible doubt that whites who support those double standards do so because they actually are mentally ill.