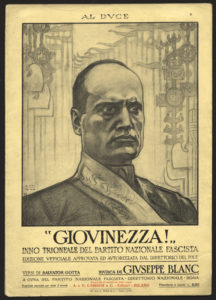 [1]A frequently discussed issue among Right-wing circles is the new generation and its relations with the previous one; “revolutionary” youth in relation to the men and ideas of the Fascist period. Some, in this regard, believe that the same phenomenon is met with here that can be observed more generally: the new generation no longer understands the generation that preceded it, the accelerated pace of events having interposed between the one and the other a mental distance much larger than that which in other times normally would have separated them.

However, in this way of presenting the problem, one often can detect a certain superficiality and tendentiousness. And are the concepts of “youth,” of the new generation, of “revolutionary calling,” themselves unambiguous?

In fact, one should start by defining the plane on which one wishes to apply such notions: whether one is speaking of the biological level, or of a higher level, as should well be supposed in this case. If we wish to view things from a spiritual point of view, we have to be careful, because there are cases in which the meaning of “new,” “young,” “the latest” is inverted. Hence, generally speaking, if we consider the succession of generations within a given cycle of civilization, one can even formulate a paradox, because what is truly young is that which is close to the origin, while the final generations, which chronologically speaking are younger, are in fact the oldest: senescent, crepuscular, even if sometimes one can mistake for youth what really is only infantilism and primitivism. To cite one example, the so-called “youth” of the North American races, with their “new world” and their primitivism, to us represents the infantilism not of “young” generations, but of the final generations, of those near the involuted end of a cycle — of the cycle of Western civilization in general.

We mentioned this because something analogous is also true in a more concrete domain. Thus, looking around us, can we really consider — other than in a biological sense — an unfortunately considerable part of the “youth” in today’s Italy to be “young”? This indifferent and unprincipled youth, absorbed by materialism and petty hedonism, incapable of any enthusiasm, incapable of coherence, livening up, at the most, to football matches and bicycle races? We would rather say that this “youth” was dead even before having been born. Today, anybody who refuses to yield, anyone who lives an idea, anyone capable of remaining standing, upright, despising everything feeble, devious, underhanded, cowardly, whatever their age, is infinitely more “young” than this peculiar “youth.”

It is precisely along these lines that one must understand the notion of youth in a more than biological sense, defining a common denominator, so as to overcome artificial antitheses. If we were to indicate the fundamental characteristic of youth in this higher sense, we would define it as the will to the unconditioned. In fact, this is the factor that accounts for, on the one hand, all idealism in a positive sense, and on the other, all forms of courage, enthusiasm, creative initiative, and ability to move resolutely to new positions, with little concern for one’s own person. In particular, physically, true youth is characterized precisely by the almost paradoxical disposition of a superabundance of life, which, instead of being attached to itself, expends itself without reserve and is able to consider its own death as of no account.

One should distinguish between the most elemental phase, in which the qualities just indicated only occur spontaneously, in a disorderly and transient fashion, often like a kind of spontaneous combustion, and on the other, the phase in which these qualities are affirmed and stabilized. The first phase is common in youth properly speaking, in individuals who are then gradually “normalized,” “come to their senses,” convincing themselves that “idealism is one thing, real life another,” abdicating the will to the unconditioned, which is thereby revealed to have had, in such cases, a largely physical basis. The second phase occurs, on the other hand, when ordeals have had to be faced, hard ordeals, and these ordeals have been endured without failing.

This is true both in the interior and in the political domain. With this we can return to the problem with which we began. Which generation of yesterday is it that today’s generation can no longer understand? In fact, something has repeated itself: yesterday, too (after World War I), there was a “generation of the front”; yesterday, too, they were faced with intolerable political, social and moral conditions, and in the impetuosity, idealism and virility born out of a life of danger and combat, the basis of the fascist movement was formed. Today, things recur in the same terms; in addition, there is the circumstance of an even more severe ordeal, since today’s “front generation” is the survivor not of a victory, but of a defeat and a general disintegration.

In these terms, there should only be a fundamental continuity. This continuity of a “youth” that is not biological but political, only ceases to exist when it comes to those men who, after fascism came to power, lost themselves, were no longer capable of maintaining their intransigence, their will to the unconditioned, their radicalism, selling their birthright for a mess of pottage: for this or that semi-bureaucratic position within the framework of a despicable, theatrically presented officialdom and a new conformism.

But it would be really unfair to lump them all together and deny that within fascism, there were also men who remained upright, often hampered in every way by one or the other unofficial clique. The reuniting of these men with the new wave, with the new youth and the new “front generation,” should be natural and based on an affinity: like the flow of a current that, having overcome an obstruction, an obstacle, resumes its course.

One more point should be mentioned. It is not always easy — especially in the case of Italians, Mediterraneans — to give oneself an autonomous value. In order to have a sense of individuality, in order to feel important, many have a need to fret, to at all costs oppose something or someone. It is in this light that we must judge certain aspects of the “revolutionary calling” and also a certain individualist tendency of “the youth,” when it feels the need to differentiate itself at any cost, indiscriminately espousing new ideas just because they are new. Because of this, it is often, therefore, merely a case of an “inferiority complex”: the need to assert oneself in an indirect way, by antithesis and contrast, because one does not feel sure enough of oneself. This attitude should be rectified by the political, and not simply biological, youth. The highest ambition should not consist in being a revolutionary at all costs, but rather in being the exponent of a tradition, the bearer of a transmitted force, which should be enhanced and potentiated with anything that can secure the inflexibility of its direction. This also goes for the domain of ideas, and one of the proofs of inner freshness is the ability to understand that true ideas are above every contingency, and that it is through them that authentic personality acquires its value: not through a confused revolutionary impulse, not through a preconceived distrust of the past, not through a disorderly dynamism that only shows the lack of a true inner form. Without getting into particulars, since this is not the place for that, we can easily discern on this basis what, in today’s political youth, needs to be rectified in terms of general attitude, so that as a unified force, it can pursue a precise political ideal: the ideal of the true organic State.