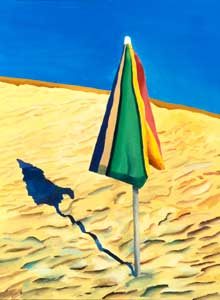 The other day, I had one of those fist-trembling moments. I was at the beach, waiting in line to buy a cheap lunch at a food truck. The person taking orders was a congenial, light-skinned, middle-aged black who was carrying on an intermittent conversation with a younger, darker friend of his while taking orders. The kid seemed in his late teens and sported a white visor and a thatchy, stylish goatee. He brimmed with cool, easy confidence as he leaned against the truck, shirtless.

As I was relaying my order to the man in the truck, the kid notices two white girls exiting the beach. They were pretty girls, both his age, both in bikinis, with one partially covering herself with a towel. He catches their attention, and mine as well. Apparently, they know each other, but not well enough for the girls to approach him or for him to approach them. The kid then tries to rectify this by asking them their plans for the weekend.

My stomach immediately tightened. I felt my stress level rise as I forced myself to listen to their conversation while pretending not to. I knew where this was headed. Wherever the white girls were planning to be on the weekend, the kid was hoping he could be there as well. Intentions obvious.

Nothing bothers me more than black-white dating, marriage, and miscegenation. How can one not be bothered when seeing something great like the white race being polluted and diluted by the genes of black Africans? By all accounts, blacks are behind us by tens of thousands of years of evolution. These are people who couldn’t even invent the wheel. These are people whose history, such as it is, contains levels of violence which dwarf those of Europe in the worst of times. Of course, this is according to the anthropological record. Blacks until very recently were almost entirely sub-literate. Whites have had to construct their history for them because blacks never had the wherewithal to do it themselves as it unfolded. Then throw in their atrocious levels of violence and barbarism in the modern world (both in civilized nations and in their own), their abysmal academic performances, and their overall lack of sexual control. All this makes one want to ask why any self-respecting white person would want sexual relations with blacks.

Silently, I begged the girls to blow the dude off. Couldn’t they see that the odds were better than excellent that his IQ was south of 95? Couldn’t they see that the odds were also pretty good that he would sire at least one child out of wedlock during his lifetime? Couldn’t they also see that he would be significantly more likely than a white man to one day commit a crime or serve time in prison? The median black yearly income in the United States hovers around $30,000 per year. Their unemployment rate is currently twice that of whites. They are also much more likely to carry venereal diseases and be dependent upon illicit drugs. Why, I silently asked these girls, would you want to even be friendly with a guy like that? Just imagining that they would made me angry. Whites are on the ropes in their own homelands these days. We face hatred and discrimination as well as a burgeoning tide of third world immigrants who wish to supplant us, oppress us, and in some cases, kill us. Most absurdly, we are not allowed to act in our own racial interests without facing the possibility of being labelled “extremists” and having our livelihoods destroyed.

Whites must join together to fight this, both for ourselves and for the unparalleled civilization we’ve created in Europe and in the United States. This is a desperate need, and when young white women wish to squander our genetic advantages by producing progeny which will never be loyal to us, we become weaker. And if the men with whom they miscegenate are black or brown, then our enemies become stronger. Have we not all noticed that the black aristocracy in America consists largely of light-skinned half breeds? And they all hate us. From Frederick Douglass to W. E. B. DuBois to Malcolm X down to Barack Obama and his mulatto mafia in the White House.

For the most part, the blacks who have caused whites the most grief over the years have been either half or a quarter white. This means that black-white miscegenation causes problems. Just like how many emancipated 19th-century Jews in Eastern Europe became Left-wing radicals as a result of anti-Semitic discrimination, these half-blacks at first identified as white and sought entry into a white society which very rightfully disdained them. Rebuffed, they then sought a kind of revenge. Like Dr. Moreau’s half-breed animals, they preferred to destroy that which could never accept them.

Ordinary blacks, on the other hand, rarely identified as white to begin with, and therefore rarely effectively protested whenever whites drew the color line. They knew their place, and they also knew that in a Pax Caucasica their place would be far more comfortable than in any world they could create on their own. This is why a hundred years ago Mr. Cool Customer would not have dared speak to a white woman in that fashion. It would have threatened the hegemony of whites which benefitted everyone, not just whites. And there would have been violent repercussions from both sides.

Fortunately, the girls spurned his overtures. They offered brief, noncommittal replies to his question and showed no interest in carrying on the conversation further than necessary. By their body language, one could tell they were itching to leave. But that didn’t stop our sable lothario from shamelessly probing further.

“Boardwalk,” said one of the girls. The other one, apparently, had decided to contribute nothing more to the conversation.

The girl paused a moment before responding. “My mother,” she said.

True or not, it was the ultimate conversation killer. Nothing will turn away a young suitor better than mention of a girl’s mother. Even this young black could figure that out. But he played it cool. He shrugged and smiled and said he hoped they have fun on the boardwalk with their mothers. His suddenly detached manner however indicated that he didn’t believe them. They walked off without saying good-bye.

While I was gathering up my lunch, I watched as the light-skinned black in the food truck laugh at the fortunes of his young friend. “Got not no luck with the ladies today, huh?” he teased.

I took my lunch and left, gratified that, in this instance, the girls did the right thing. But how often do they not do the right thing? How often do young, pretty white women find themselves in contact with smooth-talking, amorous blacks who would like nothing better than to snag themselves a snow bunny? It would take a girl with higher than average intelligence or self-confidence or a girl who has been rigorously churched or home-educated to be able to recognize such a situation for what it is: the risk of pregnancy, STDs, and heartache for her, and the further dissolution of people like her. Once upon a time, such safeguards were unnecessary. Once upon a time, we had the law on our side, a law that reflected racial differences in a way that was fair to all. You can have sexual relations, but only with your own kind.

“White’s white, and black’s black. And that’s that. And that’s the way we should leave it,” to quote Ray Davies of the Kinks. There’s a lot of wisdom in those words.

But in the absence of law and the common sense safeguards mentioned above, there is nothing stopping a white girl from saying yes in such a circumstance. These days she could happily run off with any overjoyed black and pay no price for it at all — at least not right away. The only thing left that can help prevent this from happening is prejudice. Yes, prejudice.

None other than Edmund Burke defends the virtues of prejudice, and does so thusly:

Prejudice is of ready application in the emergency; it previously engages the mind in a steady course of wisdom and virtue, and does not leave the man hesitating in the moment of decision, skeptical, puzzled, and unresolved. Prejudice renders a man’s virtue his habit; and not a series of unconnected acts . . .

We, as whites, need to resurrect and resuscitate anti-black prejudice when it comes to black-white miscegenation. At family gatherings, in the office, at sporting events, in our neighborhoods . . . pretty much wherever whites have social intercourse, we need to get the conversation rolling again. We have to make it clear than black-white miscegenation is not cool. Of course, we should always be polite, but that shouldn’t impede us from being frank as well. Most importantly, we must have confidence in ourselves and feel no shame.

If enough of us do this over a long enough period of time, it will sink in. Young white girls who may lack the intelligence or the confidence or the cultural backing that the two girls at the beach possessed will be armed with a common sense prejudice that will prevent them from going astray. They’ll just keep walking, knowing that in the back of their minds that black and white mixing is just wrong.

They won’t even have to know why, even if the “too dark” blacks they reject most certainly do.