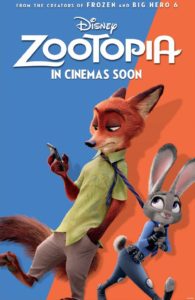 These two reviews of Zootopia were written independent of each other. The authors did not read each other’s work until completing their own.

Disney’s Zootopia is cute, clever, and entertaining. But in terms of its message, it is pure evil. The Angry Birds Movie [2] is plausibly interpreted as a pro-nationalist, anti-immigration, anti-Muslim allegory, whether that was the intended meaning or not. Zootopia, however, is clearly intended as pro-diversity, anti-nationalist propaganda. But worse than that, Zootopia is basically a syringe of mental vaccine against race realism, which will make white children who absorb its message less likely to observe and act upon racial differences. Thus it will make them more likely to fall victim someday to non-white predators. And parents are paying for the privilege of injecting this poison into the brains of their children. But then what else is new?

Zootopia is the story of Judy Hopps, a cute little bunny girl with wide blue eyes and a perky, can-do attitude who grows up on a carrot farm in the countryside and dreams of becoming a policewoman in the big city of Zootopia.

At the beginning of the movie, a voice-over explains that in the past, animals were ruled by their instincts. Predators ate prey, and prey feared predators. But, over time, they evolved beyond these instincts and created a society in which predator and prey live side-by-side in harmony, and everyone is free to be anything he or she wants. So cute little bunny girls from the country can even dream of being big-city cops.

Unfortunately, some animals aren’t entirely thrilled by the progressive narrative. Of course they would never challenge it openly or righteously. Instead, they speak furtively and apologetically. Judy’s parents, for instance, discourage her from her unrealistic dreams and fear for her safety in the big city. They even give her a canister of fox repellent, just in case, because foxes can’t be trusted. It’s in their biology, you see. And remember Gideon, the fox bully from Judy’s childhood who talks like a white Southern hick? Judy takes the fox repellent, just to humor her parents.

Judy goes off to the city. Because of an affirmative action initiative, she gets in the police academy. As one might expect, the police department is full of large, strong, aggressive animals like water buffalo, rhinos, and tigers. So Judy will have to work really hard to pass the tests and fit in. But in Zootopia, biology is no barrier to realizing one’s dreams. Think G.I. Jane with bunnies.

Unfortunately, however, there are deep-seated biological prejudices in the police department that lead the police chief to think that a five-pound bunny might not be able to arrest a panther or a musk ox. So, upon graduation, Judy the “token bunny” is assigned to write parking tickets.

Judy is disappointed, of course, because there are bigger crimes to solve. For instance, a number of predators have recently gone missing. But orders are orders, so she dedicates her perky, can-do attitude to writing parking tickets. Then she encounters Nick Wilde, a fox with an adorable little fox pup, who is being discriminated against by elephants who refuse him service at their ice cream parlor. Foxes, you see, have a reputation for being sly con artists, and the elephants are stereotyping him just like Judy’s parents would. Judy uses her badge to intimidate the elephants into serving the fox. Serves them right, the bigots. But then she is outraged to discover that the fox is actually — true to stereotype — a con artist.

Now it is tempting to regard this discovery as a little red pill for the audience. But that would be a mistake, for as the movie progresses, we learn that the sly fox has a good heart. He’s a Mensch. Yes, he is a bit of a scoundrel. But it turns out that his trickery and connections can be used for good ends as well. So he teams up with Judy and helps her solve the missing predators’ case, and at the end of the movie, he becomes a police officer himself, while Judy becomes a bit of a foxy trickster. She even teams up with Mr. Big, the organized crime boss in Zootopia, who uses illegal methods to help Judy’s investigation. And this delicious feast of Jewish moral ambiguity and subversion is rated G, because to turn a human being into a liberal, you have to get them young

And as for Gideon, the childhood bully fox, even Judy’s parents like him. He’s grown up to be an artisan pie baker. (I kid you not.) Gideon explains to Judy that his bad behavior in the past was due to psychological issues. Keep moving folks, nothing biological to see here.

This is the intellectual equivalent of a vaccination. A typical vaccine protects us from infection by a disease-causing microorganism by boosting our immune system against it. Our immunity is boosted by injecting a small amount of the dangerous microorganism itself, which has been diluted, killed, or otherwise denatured. In Zootopia, a small amount of truth, namely that certain predatory types might actually act according to their natures, is acknowledged. But then it is shown not to matter.

The truth about foxes is diluted by the NAXALT (not all X are like that) fallacy, which basically argues that since “Not all foxes are like that,” due to the inevitable existence of outliers on bell curves, we have to act as if “All foxes are not like that,” i.e., we are somehow morally obligated to treat every member of a group as an outlier, even though this is obviously untrue, because there are always more average specimens than unusual ones.

The same pattern is repeated on a larger scale in the search for the missing predators. It turns out that the predators have gone savage, reverting back to their predatory nature. Mayor Lionheart of Zootopia, who is a predator himself, has been covering up the outbreak of savagery to protect predators against stereotypes. After all, Zootopia is only 10% predator, 90% prey. We can’t have the majority thinking that 10% of the population is criminally inclined, can we? Even if it might be true. Judy, however, suggests that maybe the cause is biological, that predators are reverting to their savage ways.

If this is true, then perhaps the solution is to quarantine or segregate predators, which is an end to Zootopia’s idea that all different species can live in the same society peacefully. Indeed, the movie shows quite clearly that biological diversity makes it necessary to separate animals. For instance, Zootopia is divided into different habitat zones, from tropical rain-forest to Arctic tundra. Why? Because animals are biologically adapted for certain environments and cannot live comfortably in others. Zootopia is also segregated by size. It has a special neighborhood for small rodents, who obviously can’t have elephants traipsing up and down their streets. Obviously, Zootopia is only workable because of a certain amount of segregation.

One of the most amusing scenes is when Judy is in a hurry and goes to the Department of Motor Vehicles to run a license plate. It turns out that the DMV is staffed entirely by sloths, who march to an entirely different drummer. I used to have the same sinking feeling when I would visit the Atlanta Post Office, which is staffed entirely by sloths as well. And what do the predators eat if not prey? Can lions and bears subsist on tofu? The natural conclusion is that there would be less petty frustration and bloody conflict if different kinds of animals lived in societies of their own. The only possible Zootopia is a world in which each species has a homeland of its own, rather than being all mixed together.

The separate habitats, the inter-species conflicts, the cover-up of minority crime, and Judy’s suggestion that the cause of crime may be biological all seem like a massive red pill. But it turns out to be another vaccination. For the climax of the movie proves Judy to be wrong about the cause of crime and the mayor to be right to cover-up the crisis, in order to prevent people from drawing the same mistaken conclusion that Judy announces.

The punishment for Judy’s candor is swift and righteous. She is denounced and shamed for transgressing the sacred dogmas of liberalism. Her fox friend, Nick, takes it personally and becomes sulky. The obvious truth that predators are biologically predisposed to prey on others is said to be tearing Zootopia apart. Judy feels terribly guilty.

Then we discover that the real cause of the predators going feral is a drug. It turns out that Assistant Mayor Bellweather, a sheep, has hatched a conspiracy to drug predators, making them turn feral, in order to create fear and division in Zootopia so she can rise to power on a prey-supremacist platform. Fortunately, the plot is uncovered, the criminals are arrested, and a cure is found for the poison. Lesson: if lions can’t lie down with lambs, that’s probably the lambs’ fault.

Judy concludes that her reference to heredity, although superficially plausible, was ignorant, irresponsible, and small-minded. She concludes the movie with a speech about what she has learned. She thought that Zootopia was a perfect place where everyone gets along and you can be anything you want to be. But she learned that it is not perfect. There are problems. But they are not caused by biology, which society cannot change. Instead, they are caused by things like ignorance, fear, psychological issues, and simple mistakes — all of which can be fixed. So, in the end, we can all get along and be anything we want to be. But it just takes a little bit of effort. In real world political terms, this is a repudiation of utopian liberalism for PC social engineering.

The fact that different species evolved for different environments and have different, conflicting forms of life, is not an insuperable problem. It is just as superficial as different human languages and customs and religions. (And nobody fights about them, right?) Superficial diversity only gives rise to color and comedy. Deep down, we’re all just the same, lion and lamb alike.

The real world analogies are clear: some racial groups may indeed have a genetic disposition to predatory behavior, whether it be brutish (like blacks) or sly (like Jews). It seems daring to acknowledge this, of course, but denial is becoming increasingly threadbare and alternative race realist explanations are becoming more widespread. So instead of outright denial, the Left is now taking a subtler approach. Race realism must be acknowledged, but in a diluted and denatured form, to vaccinate people against accepting the real thing.

Biology may be real, but we can safely ignore it because of NAXALT, emotional blackmail, moral shaming, the alleged social usefulness of some biological predispositions (Nick’s sly foxiness), and plausible alternative explanations, like evil members of the majority using drugs to make some groups act like animals in order to seize power by dividing society (diversity good, division bad). Got it? Sure, it sounds dumb when stated so baldly, but this is a movie for children, and many grownup liberals actually hold exactly such childish beliefs.

Zootopia is genuinely witty and highly entertaining, but its message is far worse than the mindless, mechanical shitlib shilling that we have come to expect from Disney. It is a calculated attempt to inoculate specifically white children against race realism. Judy Hopps and her family are characterized as European Americans. The entire movie is calculated to appeal to whites, right down to the artisan pies. Which means that someone, somewhere at Disney is aware that white racial consciousness, fueled by awareness of human biodiversity, is on the rise. Thus they have created a movie to fight us. That’s the bad news. The good news is: they’re afraid.