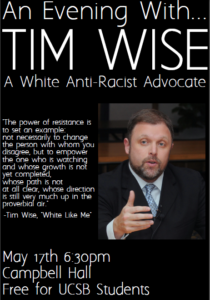 The most terrifying thing about the career of Tim Wise is its lack of controversiality. It’s one thing to have people like Wise presenting controversial perspectives to the public. It’s a whole other thing entirely to have the arbiters of public opinion holding up Tim Wise as someone to be consulted as an indisputable expert.

In the very first sentence of Tim Wise’s own About page, he presents himself not as a political activist, but as an “educator.”[1] The implication of this shift in framing seems to be that if Wise says something that you disagree with, it’s not because you’re on different sides of the political aisle and a reasonable debate should ensue; it’s because you haven’t been properly “educated” — one hardly expects a pupil and “educator” to have a mutually respectful debate on the teacher’s topic of expertise.

Our academic system, as well as the media, seem to have bought into that:

Tim Wise . . . [has] spoken to over 300,000 people in 48 states, and on over 400 college campuses, including Harvard, Stanford, and the Law Schools at Yale, Columbia, and Vanderbilt. He has trained teachers as well as corporate, government, media, entertainment, military and law enforcement officials on methods for dismantling racism in their institutions, and has served as a consultant for plaintiff’s attorneys in federal discrimination cases in New York and Washington State.[2]

Named one of “25 Visionaries Who are Changing Your World” by Utne Reader, Wise has contributed chapters or essays to over 25 additional books and his writings are taught in colleges and universities across the nation.[3]

In a recent essay at Counter Currents, “Employers Hate Blacks, but They Love ‘Ebony’?”[4], I discussed a few of the extensive problems with one of the most widely cited studies claiming to prove the existence of rampant racial discrimination in employment in the United States — not least of which was that the name “Ebony” performed as well or better than over half of the white sample.

What I did not discuss there is the fact that some of these very significant criticisms had been made explicit to Tim Wise in a debate with conservative author A. R. Ward in February of 2011. In January of 2012, Ward published five rounds of the debate, writing that: “After 5 rounds of back–and–forth I’ve decided to publish the debate for all to read. I’m still waiting for him to respond to my final entry (it’s been 9 months), and I’ll post his response if I get it.” On January 23, he updated the reference page to explain that Tim Wise had informed him that a response was on the way.[6]

Meanwhile, Wise accused Ward of “perhaps needing attention, [since he] decided to go ahead and publish an incredibly partial, truncated excerpt from the debate on his site . . .” But in fact, it took Tim Wise a whole extra year to publish only the first two rounds of the debate.[7] Despite the fact that Ward had already published all five rounds a full year earlier, Wise claims that he wants the reader to “see each completed round as it currently stands, rather than just snippets intended to make one debater seem particularly absurd and the other especially bright,” and goes on to promise that “Upon finishing up my final statement, I will post his closing and then mine, for a fully completed debate.”

Yet, not only has Wise’s fulfillment of these promises never been forthcoming; he has continued brazenly citing this same study as one of the most significant pieces of evidence for systematic “racism” in American society even after its significant flaws had been made clear to him by Ward, to whom he never responded or gave any explanation, even after promising to.[8]

One can find countless other examples of such incredibly, blatantly dishonest behavior from Tim Wise if one has enough patience to listen and comprehension of some basic math. For example, he can be found angrily attacking the notion that rates of out of wedlock birth play any role in the amount of social dysfunction in black communities on the basis that these rates have risen along with social dysfunction in black communities because blacks are giving birth to fewer children in stable marriages, and not because single mothers are giving birth to more children.[9] In other words, his point is that the percentage of out of wedlock births has risen in the black community over the last few decades, but the absolute number hasn’t — but it is precisely the ‘percentage’ of dysfunction within the black community as a proportion of the whole that stands in need of explanation.

Similarly, in his “Reflections on the Politics of Crime,”[11] Wise tackles the topic of race and crime. In this post, he discusses a few citations which suggest that “concentrated poverty” (meaning not just poverty in absolute numbers, but rather the concentration of poor people into one area) is the most relevant sociological variable in predicting crime (the point being to explain disproportionately high rates of black crime because “concentrated poverty” is something blacks are subjected to more frequently).

Yet, his key citation for this claim turns out to be an essay which starts by claiming that “structural disadvantages [such as concentrated poverty] increase homicide rates in communities through their deleterious impact on community control . . . ,” and then explains that it measures “community control” in major part through observing “the percentage of children living in husband-wife households.” [12] In other words, the actual claim Wise’s citation was making was not that “concentrated poverty” influences crime directly, but that it does so by increasing the out of wedlock birth rate! I found this slip, in particular, to be absolutely hilarious.

Another post, “Nazis Can’t Do Math: Reflections on Racism, Crime and the Illiteracy of Right-Wing Statistical Analysis,”[13] deserves comment for several things, not least of which is its title: the proper term for an inability to comprehend statistics is innumeracy, not illiteracy — but it actually is an example of illiteracy to get these two terms so confused.

He writes: “In 2010, since there were 42 million African Americans in the population, for there to have been 8,384 black murderers (and even if we assumed that each of these were separate and unique persons — i.e., there were no repeat offenders, which is unlikely), this would mean that at most, about 2 one-hundreths of one percent of all blacks committed homicide that year. So to fear black people generally, given numbers like these, is truly absurd.”

All well and good: any given individual black person one encounters in daily life in the United States is fairly unlikely to turn around and commit murder on the street right then and there. But Wise titles another post “Resurrecting Apartheid: White Police are Waging War on Black America”[14] and asks, “Is it really a stretch to call [America’s system of law enforcement] apartheid, even as one after another after another after another black male (roughly one every 28 hours) . . . are gunned down by police . . . ?”

If the number of murders committed per hour should be our metric for whether rates of violence are outlandish and deserving of such incredible hyperbole, then Wise should also point out to his readers that black males commit about four murders of whites every 24 hours, and about sixteen murders of other blacks.[15] In fact, even if we combine the number of police shootings of black suspects (including those that were justified self–defense, just to make liberals who suspect that justified cases of self-defense aren’t actually so) with the number of white murders of blacks, there are still less than two each day. This means that there are twice as many whites killed by blacks as the number of blacks killed by whites and blacks shot by police (whether in self–defense or not) combined. And there are eight times as many blacks killed by blacks.[15]

So, which is it? To retain even the pretense of any kind of intellectual consistency, Wise would either have to hold his feet to the fire and admit that black violence against both whites and other blacks is an atrocity two to eight times as horrific as apartheid, or else he would have to admit that his hyperbolic rationalization for fear of police is two to eight times as bigoted and innumerate as the hyperbolic rationalizations of fears of black violence he so loves to rail against.

Further in, he admits that the national statistics make it very clear that black perpetrators in fact commit a wildly disproportionate share of the violent crime in the United States, saying: “one could argue . . . that these figures clearly indicate that blacks are much more homicidal than whites. So, while the per capita homicide offending rate for blacks may be only 0.02 percent, the rate for whites is much smaller: only about 0.003 percent, or 3 one-thousandths of one percent (5,953 white murderers as a percentage of 196.8 million whites). This means that the homicide offending rate for blacks is about 6.8 times higher than the rate for whites.”

In any case, we can put together a formula for predicting how frequently blacks and whites would kill each other given the population rate and encounter rate between the two if both groups were committing homicide at the same frequency. When we do that, we see that the numbers would predict that any given black person should be expected to be five times more likely to be killed by a white killer than any given white person is to be killed by a black killer. That the figure Wise arrives at is that this is only 2.8 times more likely actually only goes to further demonstrate the original, obvious point — the number is significantly less than we would expect on the assumption that homicide rates between whites and blacks were equal, precisely because they are not equal (blacks, as he has just admitted, commit murder more frequently).[16]

I think that accusing one’s opponents of outright intellectual dishonesty is a charge that should never be lightly made. If we accuse people who innocently commit intellectual mistakes of having committed moral mistakes or of having a defective character and thus attack them personally rather than continue to approach them as equal partners to an open dialogue, then we risk alienating people who could have become valuable allies if only presented with the right information, in the right form. Over the long term, I think the costs of extending the benefit of the doubt to people who end up proving that they don’t deserve it are massively outweighed by the costs of failing to extend the benefit of the doubt to those who do.

None of those concerns, however, even remotely apply to Tim Wise. In fact, the dishonesty that is present in Tim Wise’s work is so extreme, and so easily identified, that it is utterly impossible to explain his standing in and as a result of their having been sucked in by Wise’s fraudulent pretense of intellectual objectivity by accident. There is a more fundamental lesson that ought to be taken from this: Tim Wise’s intellectual errors aren’t being swallowed by (((academia))) and (((the press))) by mistake; they’re being tolerated and promoted on purpose, precisely because they serve foregone conclusions and anti–white agendas.

When one’s opponent’s claims of interest in mutually respectful debate is so easily revealed to be a façade — and when liars take on the arrogant pretense of being “educators” while calling for the use of the violent arms of the State towards their favored ends — responding on the false terms of polite debate only plays into the enemy’s hands. But the plus side, for us, is that this house of cards can’t continue to stand on its own “merits” without the help of the grunt army of useful idiots [2] who have been convinced to actually believe this stuff sincerely; yet the lies are so blatant and severe that the task of unmasking them is easily within nearly anyone’s reach.