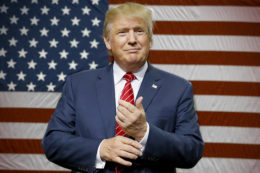 [1]Sometimes I am amazed at how smart people can ignore obvious answers to a problem and instead struggle mightily with convoluted ones. Recently, pundit and activist Ben Shapiro (who is no friend of the Alt-Right [2]) joined conservative blogger The Ace of Spades on his podcast to discuss Donald Trump. You can listen to the podcast here [3].

Ace opened with the question: “Are we on team Hillary?”

This, of course, is a reference of Mr. Shapiro’s vocal opposition to Mr. Trump and his steadfast adherence to the #NeverTrump movement. If we don’t back the GOP candidate, according to Ace, aren’t we just helping the opposition? The remainder of the discussion consisted mostly of Mr. Shapiro trying to explain to Ace his anti-Trump stance.

Mr. Shapiro essentially fears that Mr. Trump will “shift traditional American conservatism to European style populism” which will derail the GOP for the next twenty years. He points to Mr. Trump’s isolationism, his liberal tendencies towards trade, his lack of consistency on certain policy matters, his totalitarian nature, and his constant desire to cut deals and concludes that Mr. Trump would be little better than a Democrat who will later be used as a weapon against the GOP once he fails miserably as President. He also referred to Mr. Trump as a “human pile of filth.”

On the other hand, Mr. Shapiro predicted that if Mr. Trump loses in November, the GOP will be given the golden opportunity to find its conservative soul and be born again.

I find it astonishing that neither of these guys recognized this for the gobbledygook that it is.

First, they didn’t delve into why Mr. Trump has so much appeal. It was almost as if it were beneath them to even ask. Of course, we all know why. Three of Mr. Trump’s main promises (the wall, deportation of illegals, and halting Islamic immigration) are the starting points to getting America back on track to a 90-to-95 percent white majority. The majority of Trump supporters see their country slipping into the Third World and want to stop it before it’s too late. These people quite naturally prefer not to be racial minorities in their own countries. No mystery there. Mr. Trump is the only candidate willing to openly court this powerful and overlooked electorate.

Rather than talk about Trump’s appeal, Ace and Mr. Shapiro preferred to discuss foreign policy, Supreme Court judges, government growth, and the current murky state of conservative ideology . . . as if Trump supporters would care about such things. Of course, they do care, but not nearly as much as they care about Mr. Trump’s top three promises. Unlike these two podcast pundits, Trump supporters understand that any of President Trump’s policy errors short of pushing the button will be reversible. Demographic changes, on the other hand, are not reversible without large amounts of bloodshed.

As racial as the support of and opposition to Mr. Trump is, the Ace of Spades and Mr. Shapiro barely talked about race at all.

Second, neither guy explained how the GOP could be born again after a Trump loss . . . especially if President Hillary offers amnesty to 10-20 million illegal immigrants, the vast majority of whom we know will vote Democrat. Maybe the GOP will find its conservative soul in four years. But what good would that do with the White House permanently beyond their grasp?

Third, they engaged in obscurantist sophistry, as if this has any bearing on anything. Ace spent some time wondering why there wasn’t a coherent conservative ideology outside the NRO offices and why the NRO ideologies weren’t more popular with the electorate.

Number one, what is the purpose of winning victory? And number two, how do you achieve it. I think as a party and as a group of people we’ve reversed the questions now. We’re so used to losing that we’ve now gone to Question One: how do we win? And then Question Two: what is the purpose of winning? And if Question One is answered, we don’t give a crap what the answer to Question Two is.

Um, so what? What good is pontificating on the purpose of winning if you don’t win? Isn’t that, like, putting the cart before the horse? Isn’t winning the very point of politics? Anyway, Question One hasn’t been answered yet, so how does Mr. Shapiro know that Trump supporters will stop caring about Question Two?

Finally, Ace and Mr. Shapiro almost completely blow off the Alt-Right. The one group of people who understand the entirety of the problem and offer workable solutions, and these two professional pundits refuse to even give us a seat at the table. At one point, Mr. Shapiro offhandedly dismissed us as a “sh*tshow.”

Where Ace started to grope in the Alt-Right’s direction by painting Mr. Trump as a possible bulwark against “a powerful racist coalition on the left,” Mr. Shapiro would have none of it. He flatly declared that white nationalism as a response to racial tribalism on the left would be immoral.

And this points to the other elephant in the room: Race. Neither guy wanted to discuss it. If they did, they would be forced to discuss ugly topics such as IQ differences and crime statistics and reproduction rates and then be forced to reach the same race-realist conclusions the Alt-Right has. Instead, they opted for highbrow angst over Mr. Trump like a couple of bookish wallflowers fretting over why he isn’t asking them out on a date. In Mr. Shapiro’s case, the answer is fairly straightforward. He’s Jewish and is made uncomfortable by the anti-Semitism on the Alt-Right. Fair enough. But he should realize that the Anti-Semitism coming from the left, especially if President Hillary gets her way and increases the flow of Muslim “refugees” into this country, will be far worse. In the next fifty years, American Jews would be better to cut a deal with the Alt-Right and others willing to fight to keep America white than be forced to choose between living in a Mexifornian barrio, a crime-ridden black slum, or a New-World caliphate. Without racially conscious whites with the will and wherewithal to resist the “browning” of America, this is the direction in which we are inexorably headed.

In a broader sense, I believe that both Ace and Mr. Shapiro are loath to embrace the Alt-Right because the Alt-Right is a wartime movement. This is not the same to say we are violent. We are not, of course. But, in a figurative sense, we already have our swords drawn. We know there will be another civil war here in America. It could be in our lifetime. Definitely in our children’s. And it will be primarily about race, just like the last one was.

Samuel Huntington describes this in his classic work The Clash of Civilizations. Non-white civilizations attempt to solve the problem of Western modernity by accepting the latter but rejecting the former. According to Huntington, this is especially the case with Muslims. So what would America look like in thirty years when whites are a racial minority and surrounded by nonwhites who are fully modernized but despise the Western traditions?

No wonder people avoid thinking about the Alt-Right and would rather prattle on about taxes and unemployment and government spending and conservative ideology as if America is going to remain white forever. To do anything is to seriously contemplate war. And war is hell.

But sometimes, tragically, war is the only solution.

Remember that scene in The Godfather when Michael kept Tom Hagan out of his business dealings in Las Vegas? When Tom asked him why, Michael responded that the Corleone family was going to war and that Tom wasn’t a wartime consigliere.

Well, the Alt-Right is currently white America’s wartime consigliere. We just need to convince our people that war is coming. And the longer we wait to draw swords, the harder it will be for us to ultimately win.