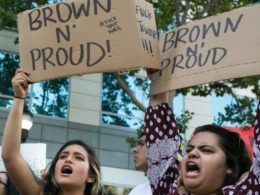 One of the golden rules is don’t start a fight you cannot finish, something the Anti-Trump left and their tribally motivated allies should be bearing in mind now, after a spate of cowardly skirmishes with some of the nice White people who attend Trump rallies.

So, you can egg a woman, sucker punch some guy, rip a T-shirt, seize a placard, burn an American flag, and draw some blood, but where is all that going to get you?

It seems likely that before this campaign is over people are going to die. But once again, where is the Left hoping to go with this?

Do they think that by resorting to mob violence against a lone woman or skinny youth is going to demonstrate to the mass of the voters how passionate they are and then make those voters think, “Wow, these people really feel strongly about Donald Trump, strong enough to bang somebody in the back of the head with a bag of rocks. I guess we shouldn’t vote for him”?

Or maybe they think that doing a Mexican version of Taharrush on a single White woman in front of the media will simply scare all the Trump supporters away. Perhaps they imagine Trump supporters thinking, “Wow, we better not provoke the underclass anymore by supporting this reality TV star, or they’ll attack our womenfolk.” When the candidacy of Trump started to emerge last year, my only doubt about what Trump was selling was that he might be ahead of his time. So, what is he selling? Ostensibly there are three main parts:

(1) A robust brand of civic nationalism, explicitly non-racial but that implicitly respects the core population of the United States (a.k.a. White people)

(2) A mild yet sensible form of economic nationalism that involves a step away from globalism (a.k.a. importing Asian unemployment in exchange for American debt)

(3) Geopolitical pragmatism (a.k.a. discarding Neoconservatism and its debris, something that neither the GOP or Democrats seem capable of doing on their own despite its obvious failure — leading to suspicions of undue Jewish influence) All of these policy directions make sense for America, viewed both as a democracy of individuals voting in their perceived best interests and in a suprahuman sense of America as a depersonalized entity, too complex to be consciously steered by any one group, but nevertheless ‘blindly’ seeking out a direction that would strengthen or at least sustain it.

For these reasons, Trump seemed to be in a strong position, despite the inevitable opposition of some of those elite groups who have aspired to steer the country down a particular globalist or neocon path for their own personal and group interests (apply parentheses where you think appropriate).

The broad strength of Trump’s position, cutting across the narrow interests of elite groups, also explains the repeated pattern of shrill opposition quickly followed by one elite insider after another being effortlessly dispatched by Trump, and the constant attempts to rally round the next even more hopeless standard-bearer. Trump is being metapolitical [4]; they were being infrapolitical.

The one big danger to Trump was not that his policies did not make sense or that that he didn’t really have any (an early canard based on lies), nor that he was opposed by powerful elites (he certainly was and is, but these elites, by being radically out of step with most of what is going on — infrapolitical — have much less power than they realize). No, the real danger to Trump has always been the lumpen, conservative mass of the American voters, with their fogeyish, fuddy-duddy attitudes about what a President should be, behave, and look like.

This is the reason that crapulous candidates like Romney, Biden, and Jeb Bush even exist — or those “lizard people [5]” like the Clintons, Obama, George W., or McCain, who can stay within the parameters of the “acceptable image.”

The median voter is a person of limited intelligence, who, as a consequence, puts a lot of weight on the “accepted forms.” Because of this, he is highly susceptible to the media who have a lot of power to signal if someone is “in” or not. The Presidential template, honed by this interface of corrupt, elite-run media and normie ballast-thinking is a candidate who is a vague mix: partly aspirational, softly Christian, reasonably polite, somewhat warm-hearted, but with a hint of boring manager (and a not always verified backstory that could serve as material for a tasty sermon or an uplifting self-help book). Needless to say, Trump is somewhat out of left-field in this sense. If his opponents had been more aware of this basic formula, on which their system runs, they would have been able to mount a much more effective opposition, and they still could if things weren’t now changing so rapidly. To use Robert Graves’ immortal phrase from I, Claudius, too many poisons have hatched out of the mud.

The game being played is no longer the one the normies are familiar with. A lot of this is thanks to the likes of those anti-Trump demonstrators and the Black Lives Matter crowd.

In normal times, Trump’s brash, assertive brand of interpersonal communication — as straight (and briskly refreshing) as a Hebridean wind — would probably ruffle too many normie feathers over the long haul to actually win, and the nascent revolution he represents would have to skip a generation.

But with constant scenes of violence by thuggish leftists and non-Whites against people who look exactly like the American median voter, the brusque edges of Trump’s persona catch the light in an altogether different way, emitting instead a halo of invincibility.

The normie voter generally just wants things to tick along nicely — so that the banal business of shopping, family growing, and mildly nauseating job can take place without too many interruptions. But, for a long time, there has been a growing sense of unease and disquiet in this usually bovine mass that things have not been going well. There have been constant signs — little things like grown men demanding entrance to their daughters’ restrooms as a right, and bigger things like rapid demographic change all around them. But, despite all this, they have slogged on, pushing one thing out of their minds after another. They have always subscribed to the view that ignoring things makes them go away.

It is easy to be contemptuous of the masses and their slow, timid ways, but their instincts and nature have a certain utility, namely to avoid low-return conflicts and focus on banal goods. Treated in the right way these tendencies can have a lot of social virtue. It is a sign of how diseased our present society has become that they no longer do.

But while normies, as a rule, veer away from dangers and challenges, and err on the side of unctuous smarm and disingenuous civility when it comes to choosing Presidential candidates, they are by no means attached to a single unvarying course of action. They are also capable of more animated responses when it becomes apparent that this is the necessary course.

We see this already with many Trump supporters, most of whom are just semi-redpilled normies, and we will see it with more conservatives, Christians, or people of the “middling sort” who initially “didn’t quite care” for Donald Trump’s tone, as they see Mexican mobs egging White women and Black Lives Matter activists trying to cripple police horses.

The often repeated analogy with 1968, when Black and Leftist violence contributed to the Nixon landslide, is a good one. Once again, a fight started by leftists will finish at the ballot boxes in their utter defeat. Let us hope that this time the defeat runs even deeper, to the very roots of the Left. It is part of the work of the Alt Right to ensure that it does.