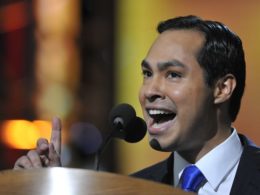 However, Julian Castro is much more than an accouterment. He brings his own radicalism — the type very much associated with the violence at the Trump event in San Jose. When Julian Castro took over the San Antonio mayor’s office in 2009, he hung the La Raza Chicano Power poster. It features his mother, Rosie, who has been described as an outspoken activist by public relations articles [4]. These types of write-ups can charitably be called puff pieces. Others have called the groups she was associated with as anti-American and revolutionary. As Charles C. Johnson commented in Breitbart [5], “While it’s possible that Castro was hanging the poster in deference to his mother, it is unimaginable that a candidate who was the son of one of the leaders of a white supremacist party would be given similar latitude.”

Andy Kroll, whose progressivism usually sullies the Internet on the Mother Jones website, gushed about the Castro family in The Atlantic last year [6]:

The new Democrat archetype has seemingly emerged; fathers are no longer part of the upbringing of a healthy adult male, capable of leading. The similarities between Barack Obama and Julian Castro are quite striking in this regard. Both lacked a strong father figure in their home, and each of their mothers instilled communist values from an early age. The social engineers that control the mainstream media will not allow the devastating statistics on fatherless homes [7] to be shouted as loud as they should be and need to be. This new idealized Democrat man is without a backbone, feminized from the very start, narcissistic, and is against anything resembling traditional values or national interests. Julian Castro could be mistaken for a Manchurian Candidate, an amalgamation of attributes to push Hillary towards Pennsylvania Avenue.

Julian has remarked about how Affirmative Action gave him opportunities he would not have otherwise had [8]. This provided him access to educational opportunities at Stanford, and then Harvard Law School. Other, more deserving candidates were passed over due to race. The daily injustices of Affirmative Action and growing quotas all result from government meddling, and create quite a bit of turmoil in their wake. Nevertheless, as has been shown repeatedly, the programs end up producing the opposite of their intention [9].

As mayor of San Antonio, his platform program was full-day pre-kindergarten [10], and he raised sales tax to the state maximum. Unfortunately, for the children of the area, there are already tomes of studies that refute these head-start programs [11]. Repeatedly, studies have shown no improvement in future achievement, and they often even negatively affect children. What these programs do, however, is put children in the hands of the State earlier. Democrat elites, for all their bluster about education, are not truly concerned with the children’s education. Vladimir Lenin said, “Give me just one generation of youth, and I’ll transform the whole world.”

San Antonio also remained one of the most dangerous big cities in America under Castro’s watch [12]. Rates of property crime were double the national average in 2013, his final year as mayor. Meanwhile, the violent crime disparity between San Antonio and the US was large, as well. Sure, a mayor shouldn’t take much heat for things remaining as they were before he arrived, but he certainly did not reverse those trends. Despite such noteworthy achievements, he now serves as Secretary of Housing and Urban Development (HUD) in President Obama’s cabinet.

One of HUD’s recently conceived boondoggles involves integrating the suburbs [13], because they are just too white and free from criminal activity, apparently. Castro and Obama act in tandem, believing in equal outcome instead of equal opportunity. This type of project perfectly illustrates what is wrong with progressive thinking. Instead of focusing on a source of the problem, like fatherless homes, their utopian naiveté tells them that the neighborhood is what causes events, rather than personal choice.

Of course, politicians like to fight wars against intangible things that cannot be defeated, such as poverty. Knowing victory is impossible; pressure can be applied to keep the spigot flowing. About 15% of Americans are in poverty now, and depending on the study the number was roughly the same in 1965, when Johnson’s Great Society [14] began. This also happened to be the year where America drastically changed its immigration policy.

Mathew Vadam elucidates just how the increased welfare spending created groups like La Raza [15]. Policymakers used funds to create community organizations, with the stated goal of furthering their interests. Taxpayer monies were used to subsidize activism, especially that of left-wing groups. The National Council of La Raza was given $30 million in 2014 [16], but that’s just a few pennies compared with HUD’s 2014 budget of $32.8 billion. With Castro in control of such a monstrosity of bureaucracy, it’s no wonder that violence reigns in Left-leaning cities. Vadam stated, “The radicals figured out a long time ago how to have their cake and eat it, too. They advance their objectives, destroy civil society, and send you the bill.”

Julian Castro was groomed for his current political position, and groups like La Raza are a part of his identity and lineage. There are other movements — while publicly unaffiliated with La Raza — that seek the same agenda. One such group is the Chicano Student Movement of Aztlan (MEChA), which is more overtly racist and revolutionary in its tone [17]. Throughout the Western US since the 1960s, MEChA has recruited on college campuses.

According to groups like MEChA, Atzlan [18] was, and will again be their homeland. Their goals have been stated many times, and in many places, but here [19] is a good summary: