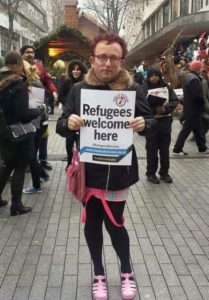 Lately, some people I have worked with [2] have invited me to learn a little about their new initiatives, namely “Refugees Welcome” NGOs. That was a chance I could not miss, and I decided to attend a few meetings. I can’t say that it was fun, but talking with these people on the formal and informal level was very informative.

To provide you with the proper context: the organizations I got the chance to know are all based in Poland, and they cooperate with other Central European NGOs, as well as with those from the Balkans and Greece.

All these Refugees Welcome groups have a great presence in the media (including the Internet) — I am sure this is true in all European countries — and I suspected that they are led by well-informed professionals, with a large popular support, who are realizing a well-coordinated and detailed plan to create a new post-racial utopia. Well, I was wrong. They are just minor players preying on state funding who don’t have much clue what they are doing and who follow whichever way the wind blows.

Let us get into the details.

First of all, the groups I got to know are very small. They are exactly the same people I already knew from other organizations. The funding used to go to counteracting homelessness — they had a “Home for the homeless” NGO. The funding went to fighting “homophobia” — they had a “Gay for the Gay” NGO. Now the focus (and the funds) are on the “refugees” — you get the idea. So this is the same dull and disorganized bunch as before.

They seem to be numerous and have a huge support, but this is also untrue. For instance, one of these “Refugees Welcome” groups is a union of 12 NGOs. However, these 12 NGOs are run by the same 10 (!) activists cooperating in various configurations.

Also, the meetings organized by these groups are not very popular. The ones I attended had some 5 attendees on average (besides the activists already working for these groups). The more successful meetings were those with obligatory participation of students or bureaucrats organized in various universities, schools, and government agencies. (It is only during those obligatory meetings that they take pictures of the audience and then post them on Facebook.) However, not many in these audiences actually paid attention, much less agreed with the activists.

Judging by the number of likes on Facebook and media coverage, I believed these initiatives have large popular support. Again, not true. Most of the likes are from friends who don’t really care. The number of comments under each post is minuscule, often non-existent. Even the pro-replacement activists themselves admitted — especially during informal interactions — that they are aware that most people not only do not support replacement, but that they are totally opposed to it. Interestingly, they claim that this is the case not only in Eastern Europe, but in all European countries. As one of the activists told me, PEGIDA rallies would be much larger and more numerous, had the German government been less efficient in terrorizing its own people.

And since popular support for replacement is not as large as the media would have us believe, they cannot rely on crowd funding. Sure, there are a few people who donate their time and money to the glorious cause of ridding Europe of Europeans, but this cannot be compared to the funding and support that comes from the state.

Hence the real strategy of the pro-replacement groups. The media would have us believe that these groups are working to change the minds and hearts of Europeans so they themselves will spontaneously begin to support the immigrants. The actual strategy (and the activists are open about it) is to pressure governments into changing laws (especially “hate speech” and “hate crime” legislation), accepting immigrants (without referenda), and then enforcing race replacement on the native population. Pro-replacement activists do not give a damn about freedom of speech, the right to decide etc. They want to have their way regardless of what the public thinks or says.

There is one state that government-funded NGO activists always look up to: the Federal Republic of Germany. Mark my words, I am not talking about the Germans or Germany. I am talking about the current administration, which — as it has now become clear — aims to destroy Germany and the German people. Merkel’s regime is the role model for all other European Leftists who wish to bring their own nations into a similar state of occupation and put them on a well-organized and planned path to destruction. There is a very popular strategy among the activists in Eastern Europe: using the German government to force these policies on their own governments.

And to be honest, they really do not have much choice. Especially in Eastern Europe, they have almost no popular support. The actions they try to undertake on their own are simply ridiculous. They claim to create collectives of journalists who create alternative media, but that just means that there is some guy in Greece who sometimes goes to Macedonia, takes a few pictures, and puts them on Facebook. They always present a long list of events they have organized, such as concerts, but fail to mention that almost no-one (besides the activists) shows up and that they can only do this because they get free space from the local authorities. They organize charities for immigrants, but this means that they collect enough old clothes to fill a small car and go the Macedonian border to hand them out — spending more money on gas than on actual charity. Without government support and government funding, they are nothing.

Now, let me go a little into the psychology and ideology of the “refugees welcome” activists. They are the usual infighting, backstabbing, unprofessional lot I have described previously. (Oh yes, backstabbing — one of the cooperatives already warned me not to talk with the other, as they are a scam.) However, there are a few new features I have noticed.

Firstly, Leftists have gone into full anti-white mode. Sure, for the first few minutes they say it is about helping refugees, equal opportunity for everyone, etc. But if you let them sink into their monologues for a little longer or ask the right questions, all pretenses are off. They don’t give a damn who is going to inhabit Europe. They support Arabs, because they are coming here en masse. It could be Chinese or Eskimos as well. Anyone, as long as they are not white. They don’t care about immigrants at all. They merely care about destroying white people.

Secondly, Leftism is obviously a form of mental AIDS, based on double think. The activists I have talked with think that immigration is a serious threat to European patriarchy, but they know that Muslims are much more patriarchal. They think that these people are really refugees fleeing war zones, but they know that most of them are young men, and a huge number are from areas where there is no war. They think that we can all get along, but they know that every country with large amounts of immigration becomes an area of bloody religious and ethnic conflicts. They seem to know the facts, but they just disregard them, because what counts is the main aim: creating a multiracial utopia by eradicating native Europeans in their homelands.

Thirdly, the Muslim is the new Jew. And the new gay, the new worker, the new transsexual, the new whatever. The stake is high, and the current wave of immigration presents the first chance in a very long time to truly destroy native European populations. If anyone’s interests are in conflict with the interests of Muslim immigrants, they simply have to go. And it is much worse than many people have predicted: the “replacement welcome” activists are actually attending qur’anic Friday schools, learning Arabic, strictly cooperating with local imams, and praising the supremacy of the Islamic world. It is especially surprising in Poland, where Leftists have always sucked up to Jews, even being much more pro-Israel than their Western colleagues. Now this is gone. They are much more than just pro-Palestinian. If the local Jewish minorities and organizations do not wish to cooperate with Muslims, they are just abandoned. It is just as Houellebecq has predicted: the Left is willing to sacrifice anything, even its own Leftism, in its anti-European struggle.

Lastly, there are two very important conclusions from my interactions with the “refugees welcome” crowd.

I have already mentioned the first: the lack of popular support for replacement. I don’t know how much of it comes from the paranoid tendencies of the Left and its desire to see the “work of Satan” everywhere, but they claim that even in Germany most of the public is against immigration, and it is only possible to keep the replacement process going by the suspension of democracy. The extent to which the establishment is willing to suspend democracy is now clear after the latest elections in Austria.

Second, the Left fears racially-conscious whites most of all. Polish activists often lamented two things: that they failed to convince Polish immigrants in United Kingdom to side with colored immigrants against native Britons, and that they are failing to convince Ukrainian immigrants in Poland to side with Muslims against Poles. However, the Left is and will be working very hard to achieve their goal of dividing native Europeans. Thus, we should counteract all forms of inter-European chauvinism, especially among our own ranks. In this time, more than ever, we need international cooperation among ethnically conscious Europeans.

I would like to urge all my readers not to give in to pessimism. We know that in the countries where the militant Left has achieved some success, it enjoys support and funding from some government agencies and players (as in Germany) or organized crime (as in Greece). However, the Right’s superiority is clearly visible, for when nationalists obtain similar funding, they have been able to create effective border patrols [3] or a full infantry regiment [4], with armored support, operating in a real war backed by a popular civil movement [5].

But we need to see the things as they really are. Yes, the Left hates us: whites as a whole, and racially-conscious whites in particular. Yes, they want to replace us. Yes, they are working towards realizing this goal. However, they are not setting the terms of the game, nor are they the major players. The major players are governments, international organizations, corporations, organized crime, and non-European minorities (especially the organized Jewish community). The Left follows their directions and funding. The managerial state creates a vacuum of ideas that can partly be filled by the ideology of the Left, and the Left is trying to take advantage of this situation.

Now to sum it all up in a few take-away notes: The danger is serious. Governments and international organizations are aiming to replace native Europeans with a mass of colored immigrants. Leftist NGOs have no real power of their own, but they are working to force the power players into making this process even more rapid, violent, and genocidal. But most Europeans are against these plans. The Right needs to organize this constituency to stop and roll back immigration. It is a fight that must be fought — and with the proper execution we can win.