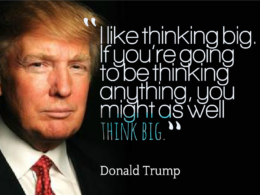 “I write the best articles. No, really: My articles are the best.”

Trump has been called an egomaniac, but actually he is something quite different. “I’m really, really rich,” he often says. And when he says it the odd thing is that it sounds like nothing other than refreshing honesty. He is really, really rich and to state it is to state plain facts. No, he is not a simple man saying simple truths. He is like Zeus come among us saying “I’m a god, okay? I’m really, really divine.” Not as a prelude to hurling a thunderbolt, just as a warm and friendly conversation starter when approaching mortals.

Asked by a reporter how it felt to be rejected by the Republican “elite” Trump responded, “I went to better schools than they did, I’m smarter than they are, and I have more money than they do. I am the Republican elite.” And he is right. It is the man’s honest, forthright frankness in the face of his own yuge awesomeness that makes him lovable. And trustworthy. Here is a man that we know will not deceive us, because he doesn’t give a shit about what we think. Here is a man who feels no need to hide, no need (putting it mildly) to engage in false modesty.

Now that I have turned 50, I think it is high time that I decide what sort of person I want to be. And the answer is on everyone’s lips: Trump. Of course, the first stumbling block here is that Trump never seems to have needed to decide what sort of person he is, or would like to be. By his own account, at least, he was building skyscrapers out of blocks when he was a child. I did the same thing, but it didn’t take. Trump is one of those men who seems to have set very specific goals for himself early on, and then rocketed towards them at full speed without a hint of hesitation, self-doubt, or even basic introspection. Why couldn’t I have been like this? Surely my parents are to blame.

In truth, however, none of this need hinder me. I will simply follow the time-honored, ancient practice of imitating my role model until, after a time, this behavior becomes second nature, rather than a put on. When that day comes, I will be Donald Trump. Only without the money (something I don’t really care about anyway). If this seems foolish to you, it is only because you are not THINKING BIG [2]. Here I am being serious, for what could be more un-Trumplike than shuffling about, head down, whining “Aw shucks, I don’t have it in me.” The very first step in becoming Trump is thus a major step forward: believing, really believing, the idea that I can become like this man. Without a hint of hesitation, self-doubt, or even basic introspection.

I feel encouraged by the fact that Trump himself seems to have had a role model: his own father. By most accounts, Donald learned it all at his father’s knee. Fred Trump was the sort of man who told people what they would be ordering when they went out to dinner. He did this to Ivana when she and Donald were dating in the ’70s. Having told a waiter at Tavern on the Green that she’d like the fish, Fred interjected. “No, she’s not having the fish. She’ll have the steak. We’ll all have the steak.” I want to be able to do the same thing, only on a budget: “No, you’re not having the coconut shrimp. You’re having the Bloomin’ Onion. We’ll all have the Bloomin’ Onion.”

I also look forward to informing women that they are fat and unattractive. “You like your candy, don’t you?” Trump supposedly said to a plump, senior-level employee who carried this horrible slight with her for years until recently unburdening herself to the New York Times. Receiving the same treatment, another Trump girl saw it as friendly encouragement: “He thought I looked much better thin. . . He would remind me of how beautiful I was.” And this account rings true. It is a genuine act of kindness to tell people that they are fat. Donald Trump is a kind man. And I look forward to being this kind to a lot of people.

The Times has also reported that Mr. Trump sought the opinions of others on the subject of his daughter’s attractiveness, when she was but a teenager. “Don’t you think my daughter’s hot? She’s hot, right?” he asked one astonished supermodel. But again, I find this perfectly charming. Trump is just a proud papa who says openly (and very frankly) what fathers often think. Unless they are fully aware that their daughters are fat pigs and slobs like Rosie O’Donnell.

You see, this is just another example of the man’s fealty to truth. (His daughter Ivanka is, in fact, hot.) Trump is no egomaniac, he is no braggart. He is an innocent of sorts, almost a kind of Siegfried figure. His mouth (Mund) is the clearing (Lichtung) in which Being (das Sein) reveals itself. Heidegger said that “language is the house of Being.” If Trump finds this out he will buy that house and put his name on it. But whether or not he acquires the actual deed, language truly is now the house of Trump. Trump, as I’ve said, is on everyone’s lips. And he has masterfully used language to knock his rivals out of the way and rise to the top of the pack — something which, a little less than a year ago, the pundits declared impossible.

Trump has knocked his rivals out of the way by speaking the truth about them. “We don’t need a weak person as President,” Trump said to Jeb Bush. This was a truly startling moment. Presidential candidates have never been that personal in attacking each other’s character. Especially not when the other guy is standing two feet away. (Another example: “Oh, you’re real tough Jeb.”) But Trump spoke the truth: Bush is weak, and he betrayed that in the way he was so palpably flustered by a man dismissed by some as a mere “celebrity,” and “reality TV host.” Jeb as world leader? Not a chance.

Language is the house of Trump because he wins by using it honestly and forthrightly. And this means that Trump is the house of Being. (No, I am really serious about this, folks.) Trump’s language reveals Being — unlike other politicians who use language to obscure Being (e.g., the woman Trump has branded as “Crooked Hillary,” who will say anything to get elected). From Trump’s mouth has come not just the truth about his pathetic rivals (I am still in pain from laughing at Marco Rubio) but the uncomfortable truths that no one else in politics will say: the truths about immigration and globalism and Muslims. Has Trump come out and spoken the truth about multiculturalism, a truth we all know that he knows? No. But here too he is a kind man. To reveal all the truth at once would fry the tiny walnut-sized brains of the American herd. Zeus only revealed himself in his full majesty to Hera, lest the little nymphs he dallied with might be burned to a crisp.

When I think about how best to get in touch with my inner Trump, it is this use of language — this loyalty to truth — that must be the key. All else is external and inessential. For example, I don’t have any property to slap “COSTELLO” onto. (Well, there is my first book [3].) I don’t own a helicopter or a jet. I could give children rides in my Honda, but I’d probably be arrested. And I am not a big beef eater. What I can do is to speak the truth forthrightly, including the truth about myself and what I believe.

Yes, I will admit, the whole thing is truly disorienting. I never thought I would live to see the ascendency of a politician I actually admire, and would emulate. I certainly never thought I would find vast numbers of Americans agreeing with me. And, of all people . . . Donald Trump? A man who only a few short years ago I dismissed as a self-promoting, nouveau riche vulgarian? A man the herd seemed to admire purely because he is really, really rich? But that’s not true — not anymore at least. They admire him for the same reasons I do: because he is really, really honest and courageous. And, yes, he is lovable. I, like so many others, am smitten with Trump. Never have I felt so close to the herd (well, the white ones anyway).

I know I am setting myself up for what might be terrific disappointment in November. But Trump fills me with the kind of confidence I remember feeling about my parents when I was a child: he can do anything. And even if he loses, the terrific anger and disappointment that white Americans will feel can only help us. But you’ve heard that argument before.

I will stop at this point, as my role model is not verbose. He knows not to oversell. But you will now have to agree that I write the best articles. No, really: My articles are the best. And they are only available at Counter-Currents.