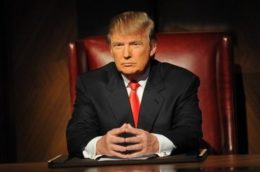 It’s tempting to say Donald Trump is just making it up as he goes along. But according to Rush Limbaugh, Trump has been planning this for years [2].

The signs of his preparation are obvious. His political donations switched [3] from the New York Democrats who could help him with business deals to the conservatives he hoped to win over. He started giving to groups like the American Conservative Union so he could speak at venues like CPAC, even deploying [4] the Make America Great Again slogan as far back as 2013. He made small videos and explicit policy statements on issues which mattered to the grassroots, like support for gun rights and opposition to Common Core, saying there should be “local education.” Trump also cultivated relationships with the conservative media figures which have proved so valuable to him over the course of his campaign.

Most significantly, Trump identified a popular base by seizing on Rick Santorum’s message [5] of “Blue Collar Conservatism” and purging it of Christian religiosity while giving more overt nationalist overtones. Indeed, he actually took Santorum’s policies to heart more than the former Senator himself, as Santorum ultimately endorsed the neoconservative caricature Marco Rubio for reasons which even he couldn’t name [6].

If you take a step back, Trump’s seemingly chaotic campaign has a startling consistency and inner logic. He’s precisely targeting that constituency of working class and mostly white Republicans which conservative commentators — and Dissident Right commentators like Steve Sailer and Peter Brimelow — have talked about as a political force for years. Unlike everyone else, Trump’s media presence allows him to get around the Donor Class and their agenda and directly connect with the people he wants.

In short, Trump approached this campaign like a negotiation. He appeals to interests, rather than vague principles. He essentially offered himself, his celebrity, and his talents to the conservative movement with the promise he would push through the policies they support. He also is promising to grow the party, trusting that he could keep the base on board with red meat like immigration, Common Core, and even his past birtherism. He would get around the Beltway Right and connect directly with the grassroots.

But that doesn’t mean he’s ignoring the major conservative foundations. In some ways, he’s taking this pandering to almost ridiculous extremes. Knowing he has no credibility on something like Supreme Court nominees, he’s essentially promised to outsource [7] the nomination process for judges to groups like the Federalist Society and the Heritage Foundation, a staggering gift to the Beltway Right. After all, it was George W. Bush who tried to appoint the all but unknown Harriet Miers to the Supreme Court, triggering outrage from “the movement.” Trump is essentially giving them a guarantee this would never happen.

And on paper, Trump actually is more of a “true conservative” than many of the other Republican candidates he has vanquished. While Ted Cruz is more of a doctrinaire conservative than Trump, it’s hard for a reasonable person to say Trump is dramatically more left wing than candidates like Jeb Bush or George Pataki. John Kasich is well known as a supporter of Common Core and is widely perceived as being soft on Obamacare because he accepted federal funds [8] as Ohio’s governor. On issues like H-1B visas and limits on legal immigration, the “consistent conservative” Ted Cruz has aped Trump’s position, reversing what he’s said in the past.

Despite his image, Trump is actually not a real populist nationalist in the European mold. He cut off that possibility in order to keep at least parts of the conservative movement on board with his candidacy. After promising an amazing health care plan, Trump announced a policy which looks like something an intern at the Heritage Foundation could have slapped together in a few minutes. After talking tough about taxing the rich (and even proposing a wealth tax [9]) years ago, Trump’s tax plan for this campaign [10] is a “pro-growth” supply side approach blessed by Beltway stalwarts like Grover Norquist and Larry Kudlow. While Trump has promised not to slash programs like Medicare and Social Security, he hasn’t presented any creative proposals like the Citizens’ Dividend [11] being proposed by some European parities in response to the challenges of automation and unemployment.

Despite his use of the phrase “America First” and his promise of a new approach to Russia, Trump is far less of a challenge to American foreign policy [12] than, say, Pat Buchanan, who would have cut America free from the dead weight of the “alliance” with Israel. Stylistically, Trump is a nationalist, but when it comes to substance, Trump is well within the mainstream of the conservative movement.

This is most likely deliberate. Trump bet if he could win the nomination and move close enough to the conservative grassroots on key issues, the party and the “movement” would both swing behind him. Even now, Trump says if he can finish off “Lyin’ Ted,” they will eventually become best friends [13] as the Donald consolidates the American Right behind him. After all, they will have a common interest in defeating Hillary Clinton. Nothing if not a pragmatist, Trump trusts in interests rather than ideology.

And this is where Trump makes his mistake. The critical point to understand about the conservative movement, what writers like James Kirkpatrick has called “Conservatism Inc., [14]” is that it has no stake in political victory or even implementing particular policies. Indeed, the “worse” things get, the more money it makes. At the same time, no matter how badly it is defeated politically, Conservatism Inc. functionaries have to continue to believe they are really in charge [15] both of their “movement” and the country itself. [16]Notice the condescending rhetoric from our favorite cuckservatives, men like Erick Erickson, Rick Wilson, or whatever “Republican strategist” you’ve picked as a bête noire for your sock account on Twitter. There’s always the tone of superiority, that they are explaining politics to the rubes. This is after months of being proven incompetent as operatives and ineffective as analysts. It’s like Maggie De Block lecturing you about losing weight.

Rick Wilson, to gang up on the Alt Right’s whipping boy, does not know anything about politics either in terms of ideology or tactics. However, as a political consultant, that’s not his job. His job is to convince campaigns to give him money and to win exposure for himself by telling the mainstream media what they want to hear about Republicans. And here, he is quite good at his job. He’s good at his job in the same way Benny Hinn or Peter Popoff are good at their jobs at fleecing the gullible. Most conservatives are as effective at hucksterism [17] as they are failures at winning and using political power. [18]This is also why the supposed division between a corrupt Republican “Establishment” and a virtuous conservative movement is overstated. Yes, most Big Business donors want cheap labor. But ultimately, they want to make money. They will compromise because there are other interests (government contracts, favorable legislation, regulatory reform) elected leaders can offer.

In the same way, an “Establishment” politician John Boehner was mainly interested in staying in office. He thinks Cruz was “Lucifer” not just because Cruz was personally unpleasant, but because Cruz would consciously sabotage his own party’s agenda in order to raise his profile among conservative activists. An Establishment politician will go along with a nationalist platform so long as it can win.

“True conservatives” won’t. The movement creates a theatrical opposition while profiting off failure [19]. It’s worth noting Cruz did nothing [20] on a winnable issue like opposing President Obama’s unilateral amnesty for illegal immigrants, but was willing to shut down the government (and cost the GOP politically) over an issue like Obamacare where the GOP had already lost [21].

The point of the movement is to fail. They are militant precisely on those issues (cutting Medicare, cutting expenditures on infrastructure, pushing upper class tax cuts, restricting abortion for victims of rape) which are deeply unpopular, while rolling over on issues which they can win, like stopping illegal immigration, pushing English as the national language, or opposing trade policies which hurt the interests of American workers.

They claim to defend Christian values but provide tax cuts to the very corporate leaders who are pushing homosexuality and transgenderism on Southern states with threats of boycotts. And they either never see the contradiction or simply don’t care.

To be a “true conservative” is to embrace a tribal identity, to belong to a kind of religion. Trump “is not one of us,” therefore, he is to be rejected, even if he can give conservatives much of what they want. Even if conservatives lose everything, they remain saved in their own eyes because they remained true to the faith and will be redeemed by history or by the vaguely Christian God [22] they imagine supports their movement. Their “Constitutional Republic” is not of this world.

For that reason, Trump may have fatally miscalculated. He appealed to interests, but conservatives wanted him to absorb their identity. He couldn’t and now #NeverTrump is never going away. [23] Someone like RNC head Reince Priebus actually has a stake in Trump victory; someone like bucket food salesman Glenn Beck [24] simply doesn’t. Trump claims he can win without party unity, [25] but considering the disadvantages he already faces, it seems unlikely.

The current hostility between Trump and Ted Cruz and between self-identified nationalists and “true conservatives” is in many ways an accident. Cruz and Trump were practically in alliance for most of this campaign. If Rubio had emerged as Trump’s primary challenger instead of Cruz, it’s easy to imagine Cruz still being on the shortlist for Trump’s VP pick. But as it has developed, Trump’s most stalwart opponents are those voters who identify as “very conservative,” the same people he had assumed he would have won over by now.

What can he do? Agree and amplify may be his only choice. Rather than trying to bring conservatives home, Trump may have to double down on nationalism. Dispense entirely with the nonsense about “limited government” which the true conservatives constantly talk about but never deliver. Perhaps Trump should say he’d repudiate all student loan debt as a precursor to abolishing the program entirely [26]. If you’re going to be a populist, go full populist.

But what is clear is Trump’s path to victory, if he has one, can’t rely on American conservatives. And more broadly, neither can a path to victory for Identitarians. This despicable charade, this nightmarish collection of obese con artists and double-chinned mountebanks has to end. It must be hollowed out from within even as it is attacked from without. Because if 2016 has proven anything, it’s that the conservative movement was never interested in even nominal victory over the Left. It’s only ever been interested in keeping its own constituents in subjugation.