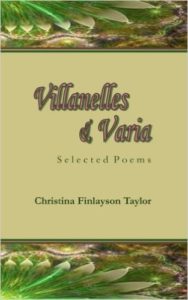 Contemporary poetry books are one of two sorts: they are part of the mass media po-biz [3] machine, soaked in processed agenda and dripping with carefully honed correct thought . . . or they are not. Either way, very few of them are actually what you would describe as delightful. And let’s face it—it’s nice to find something poetically delightful to read.

Christina Finlayson Taylor’s latest poetry collection, Villanelles and Varia, is just that.  Delightful. Start to finish. It contains 85 poems — exactly the right amount of them — which artistically blend, even while each poem is fully complete in and of itself. The inner harmony comes from the fact that each of these poems follows traditional form as much as it comes from the overall united feel of the collected pieces.

Which is only to be expected, of course, because as well as being an accomplished poet, Finlayson Taylor is the editor at Middle Island Press [4], specializing in poetry and poetic prose. She is also the co-owner of the private micro-press Red Salon [5] with her husband, Robert Taylor [6], himself an accomplished poet, artist, and lyricist, as well as legendary musician in the Neo-Folk band Changes and one of the key founders of the North American Asatru movement.

True to the book’s name, Finlayson Taylor’s poems span the poetic arc from Villanelles [7] (a French poetry form, constructed around repeating refrains — easy enough to do, assuming you know a thing or two about putting words on paper, but very difficult to do well; these are done well) through sonnets [8] and quatrains all the way to a few nonce [9] forms that rely on structure more than rhyme. Most of the pieces in the book are based on shorter forms — less than one page long, with a few hitting a page and a half.  There are just enough of each of these to give a good overall balance to the book.

Finlayson Taylor’s poetry is reminiscent (and, in my opinion, strikingly so) of the work done by the Cavalier poets [10], Herrick in particular.

In a wry 18 line poem, comprised of 9 lively couplets arranged in three stanzas — Is any of that accidental? No, I don’t think so — sarcastically titled “Merry Meet, Merry Part” Finlayson Taylor compares unrequited romantic intentions with the seasonal rounds of the earth:

But truth refused to fake the day,
Our summer never saw its ray,
But ah! It wasn’t I she sought.
His wit and wisdom, fairly bought;

Now autumn smiles are not as warm,
And winter words have waned in charm
When none pursue, the guilty flee,
And thus she fled accordingly —
The End as stilted as the start,
We merry meet, we merry part.

Her love poems, true to the Cavalier spirit, evoke a happy eros and reveal blithe  romance. The first quatrain of “That Night” is illustrative of this, ending as it does with a pair of lines both passionate and vivid. That these lines flow so naturally is a testament to an unerring poetic ear:

I fondly dwell upon that night
Of fresh new love that filled the air
And how his eyes grew softer when
I first released my long brown hair . . .

A reflective nature interlaced with the poetic ability to create lines both deep and beautiful reveals itself again and again through poems like “Experience” — which begins with wise consonance:

A bud cannot impress a bloom.

This nature is also seen in the sonnet “From the Light” which closes with these lines, each iambic-pentametered thought set to a different letter:

As dusk delivers dawn each night of lies
Illumined by the light of wise repose
That tempers bitter tongues of ancient ties
And severs hand with axe attempting blows,
The trees will never trust them! This she knows.

That is not to say that these poems rely on technique in lieu of content. Indeed, they are so well wrought that they seem to spring organically from their poet’s mind. Which is, of course, the way that all poetry should seem. The technique or form used for each of Finlayson Taylor’s poems fits the piece as if it were freshly invented for it.

Take her light-hearted gardening Quatern, “Six Mums.” Technically, it is flawless. Quaterns dictate that the first line becomes the second line in the second stanza, the third in the third and the last line in the fourth. This repetition can become rather tedious in the hands of a lesser talent. But here it is charming and natural because it suits the “laughing at herself for doing the same thing over and over” theme perfectly well:

To plant six mums, I slaved all day.
Each trowel stab in silt and clay
Unfurled another living world
Of scattered insects, earthworms curled

Their souls I saved in twos and threes
Thank God I wasn’t planting trees
Or there I’d wither, worn and gray.
To plant six mums, I slaved all day.

Throughout the book, threaded inside the poems, individual lines such as “It’s no secret, seduction comes dressed in vanity,” “A tranquil morning resonates,” and “I am the flight as well as the fall” strike the eye, as well as the mind. I’ve heard it said that the finding of great lines inside of poems is the mark of their being created by a master of the craft — in this case, however, it is a mistress of the Muses who creates them

This is a delightful book, I say it again, but now I’ll add to it: it is made more delightful by the fact that it is hard to find such a pleasantly charming, well-written contemporary book of formal poetry, a book that is resoundingly well crafted and meticulously edited, a book that is both joyful and clever.

I like Christina Finlayson Taylor’s poetic voice. Reading this book is rather like sitting in a garden with her, a cup of coffee in hand, happily listening to her talk about everything that friendship lets people talk about. To get that from a slim volume of poetry is something quite remarkable. And rare.

And, above all, it is absolutely delightful.