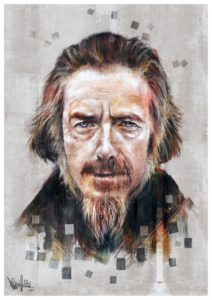 Inspired by the unique revaluation [2]of Alan Watts on Counter-Currents, I want to share my reflections on two decades of studying the “wisdom of the East” which Watts helped to popularize in his lifetime.

Indeed, I remember when I read Psychotherapy East and West [3]

, my first Watts book and also one of the first books I read about Eastern philosophy and religion. It spurred my interest immensely, and from there I was on to the Tao Te Ching, Chuang Tzu, the Dhammapada, and just about anything else I could get my hands on from the Taoist and Buddhist traditions. In my teens and twenties I was adrift in the sea of postmodern malaise and meaninglessness which is contemporary America, reading philosophy and politics, looking for some kind of direction. When I discovered the Tao Te Ching, it was like a revelation.

In contrast to the befuddling verbiage of Western postmodernist philosophers like Derrida and Deleuze, here were sparse words that cut straight to the heart of the matter – and the heart of what is beyond matter. I recall that Joscelyn Godwin once wrote or said of Julius Evola that the conviction and certainty found in his writings were a refreshing antidote to the cowardice and confusion in most contemporary prose. In the Tao Te Ching (which Evola translated into Italian) each chapter of the book seemed to me like a shining gem of wisdom; elusive, yes, and often obscure, but tantalizingly so. What it seemed to point at accorded with my intuition that Truth was something that could not be captured in words.

The Tao that can be spoken is not the true Tao.

Many readers will recognize this famous first line from the Tao Te Ching. It is the most translated book in the world, probably in part because it is so short, and therefore requires less time and effort. Indeed, many translations are done by people who don’t even read Chinese – they just read other English versions and compile their own based on them. The translation I eventually came to favor is the one by Thomas Cleary, a real scholar who can in fact read Chinese. I liked it not because of its accuracy – I had no way of judging its faithfulness to the original, not being a reader of Chinese myself – but rather because of the spiritual insight I felt it contained.

From reading Lao Tzu and Chuang Tzu, and later many Buddhist sutras and commentaries, I came to feel that Asians, or at least the Asian traditions, really had something that the West lacked. A lot of people feel this way, and have felt this way since at least the time of Alan Watts. I’ve known more than a few Western Buddhists and Taoists in my day. But what I neglected to realize was that I was not in fact reading the wisdom of Lao Tzu – I was reading the wisdom of Thomas Cleary.

The original Chinese text of that first line of the Tao Te Ching, which I’ve since studied along with the Chinese language (although I am not a professional scholar of either) reads, in transliteration: tao ke tao fei chang tao. There is no way to literally translate Chinese characters, because Chinese is a pictographic written language and does not use a phonetic alphabet like Western languages.

But an approximation would be something like: Tao can Tao is not Tao. Not quite so pretty, is it? The whole book is like that, and the Chinese language itself is quite a different animal from any of the European languages. Of course, there are subtleties and layers of meaning contained in the characters themselves – Ezra Pound wrote some interesting pieces on Chinese characters – but they resist translation, not least of all because they require the entire context of Chinese culture.

Scholars and translators have long argued about the feasibility of translating between different European languages. Can you really translate Baudelaire into English? Etc., etc. And that is referring to languages in the same Indo-European family, where words often have the same Greek or Latin roots. When we are discussing translating a work from over two thousand years ago, from an entirely different family of languages and a very different culture, the task of the translator becomes that much more difficult.

Pound also produced some excellent translations of Confucius, but by “excellent,” I mean spiritually illuminating for Western people. They are so because, although they are inspired by the writings of Confucius and his disciples, they are infused with the wisdom of Ezra Pound and his culture. The same goes, I believe, for Thomas Cleary, and for all the other translators whose works I admire so much. This is not to demean or take credit away from the original authors, but rather to give credit where it also due, for reasons that most don’t realize: to the translators of the West who give birth to new works in our native languages.

Every translator brings to his task his own identity, his own self, which is crafted from the particular spiritual, linguistic, racial and cultural milieus that he comes from. Thus, his translation is always as much a product of his native traditions as of the foreign culture that he seeks to translate – if not even more so. Furthermore, the readers will have that native culture as their exclusive reference point for interpreting the translated text, and thus the effects of the translation – to the degree that there are any – will be influenced by the native culture even more so.

This, I believe, points us in the proper direction for how to understand and use the wisdom of other cultures and traditions: as a means of better understanding, and perhaps even improving or rectifying, our own. Indeed, this was how René Guénon intended his expositions of Eastern traditions.

For example, when we read James Legge’s translations of Confucius speaking about virtue and piety, we do not hear these words in a vacuum. We hear them in the context of our own cultural tradition, which has taught us specific understandings of these concepts. We can and should be enriched by what Confucius/Legge have to say on the matter – but we should not mistakenly believe that we are imbibing pure, unadulterated Confucian tradition.

The field of Eastern studies is interesting for a number of reasons. Aside from the fact that it is a profound cultural and philosophical tradition in its own right, there is also a mysterious common ancestor between the wisdom traditions of East and West, which is the Sanskrit language. In the 17th and 18th centuries, European scholars began to suspect that Sanskrit, the language of ancient India, was related to Greek and Latin. Their suspicions have long-since been confirmed, and decades of Indo-European studies have illuminated some of the similarities between not only IE languages, but IE religions as well. The pioneering works of Georges Dumézil stand out, as well as the short study by Hans F. K. Günther and, in our own time, the works of Alexander Jacob.

The realization that Europeans had an organic connection to India led to an explosion of interest in Indian religion and philosophy in the 19th century. Schopenhauer wrote:

We may therefore hope that one day even Europe will be purified of all Jewish mythology. Perhaps the century has come in which the peoples of the Indo-European group of languages will again receive the sacred religions of their native countries; for they have again become ripe for these after having long gone astray.

Seen in this light, the “journey to the East” which many Western people have made in the last hundred, but especially the last fifty years, embracing yoga and Buddhism and the like, might actually be, in a strange way, an attempt to return home, to a wisdom that is closer to that of their distant Indo-European ancestors. The danger, though, which is all-too-obviously real, is that this organic connection will remain unconscious, covered over with the xenophilia and self-hatred which has become endemic in Western peoples, and which are too often the main motivating factors in their grasping at the wisdom of the East.