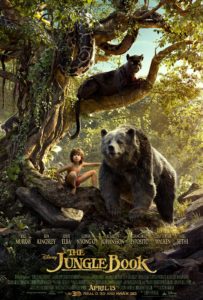 Disney has released yet another Jungle Book movie, for a total of at least five which Disney has been involved in, plus a few more [2] from other sources. Why they would produce another adaptation of the writings of an imperialist white supremacist in the current year is unclear. In any case, watching the film in comparison with its earliest Disney incarnation still provides an interesting insight into the changing sensibilities of the audience to which the producers were presumably catering. There is a darker general mood including less harmony between species and a more negative portrayal of the most “racist” characters.

In terms of multiculturalist propaganda, the current film was a relief from Zootopia, another recent Disney film which deals with race relations in a manner about as realistic as its title would imply. In the current Jungle Book, peace is not taken for granted between different animals; some are predators and some are prey, and there is only a temporary truce between them on account of a shortage of water. Communication is not universal either. Some of the animals, such as the apes and monkeys who serve King Louie, have lost the ability to speak over the past 50 years.

The film is less egalitarian than one might expect, despite the ultimate solidarity between the diverse jungle animals in support of Mowgli. There is no pretense of equality among all animals. Fifty years ago, the elephant leader’s wife made the claim that the “man cub” was no different from their own offspring. Today this particular rejection of in-group preference is absent, while the largest species are seen as aristocracy or deities.

Other animals cannot be in the elephants’ presence without bowing to them, let alone speak to them, and they credit them with the creation of everything in the jungle. No one seems to see this situation as oppressive or unjust. This is a shift from the older version, in which although the elephants are portrayed as pompous military types, they are able to speak to others and with some coaxing are even willing to help search for a lost Mowgli. Mowgli violates the established hierarchy, though, in that he is ultimately able to lead the elephants. He first gains their trust by using his own crude technology to save one of their offspring who is trapped in a pit. At the end of the film, although he still bows to them, he is able to command them. Riding on the back of the young elephant he saved, he directs the elephants to redirect a river to extinguish fires in the jungle.

The current film has an overall darker tone. In an earlier era, the closest references to death were Kaa’s abortive attempts to eat Mowgli and Baloo’s brief faking of his own demise after being attacked by Shere Khan. Today’s film is more violent, although not as harsh as Kipling’s 1894 work. Shere Khan murders the wolf leader Akela and ultimately dies in conflict with the “man cub,” while King Louie is crushed under the wreckage of his own temple after destroying its supports in pursuit of him. The modern film has also lost many bits of humor, such as the incompetence of the elephants or the mockery of Baloo by the monkeys. Baloo makes no attempt to pass himself as a female ape to distract Louie today; presumably this would offend the transgender lobby. Although there is certainly still humor in the film, the villains are no longer amusing.

In 1967, King Louie was actually voiced by the Italian-American singer Louis Prima, but he spoke like a “hip” black man and moved like a “racist” caricature of a jolly Negro. The modern King Louie has the mannerisms of a New York crime boss; he is hardly a cheerful buffoon anymore. This is reflected not only in his more menacing appearance but also in his music. Louie’s song now has a lonelier sound, lacking any accompaniment from his underlings. A jab at “racism” or “xenophobia” comes in the form of Shere Khan, a lone predator who terrifies all the other jungle animals, and who is far less charming here than in the animated version. He regales a few wolf cubs with a story about the cuckoo bird, the ultimate origin of the now popular epithet “cuck.”

Shere Khan explains that the cuckoo’s target, busy taking care of the cuckoo’s young, allows its own to die starving and neglected. The implication is that the wolf pack is cucked by Mowgli, and as Khan makes more explicit elsewhere, that Mowgli by his nature poses a threat to the lives of jungle animals. Khan’s view is portrayed as particularly unreasonable, as he wants revenge on Mowgli due to what he suffered at the hands of Mowgli’s father. In both films Shere Khan’s view of Mowgli as a threat from the beginning is portrayed as irrational, perhaps even “humanophobic.” In the current year Mowgli even deliberately distances himself from the threatening image Shere Khan has of him; he throws away his torch when the tiger hopes that he will use the fire as a weapon and thus confirm the jungle animals’ fear of man.

In the original Kipling book, though, Shere Khan is quite right to think of Mowgli this way; the “man cub” beats Shere Khan with a flaming branch and explicitly vows to kill him. Presumably Kipling had a more “racist” view of man than the Hollywood screenwriters.

Both Shere Khan and King Louie express the “racist” view that Mowgli’s species alone gives him a great power and attempt to act on this to further their own interests. Neither’s views are portrayed as reasonable; Shere Khan’s view is based on vindictiveness, and Louie’s is based on ignorance of fire. Bagheera, by contrast, for the majority of the film sees the boy essentially as a wolf and attempts to hold him to the “wolf way.” Although he does agree with Akela that Mowgli will be safer among his own kind, both discourage him from using primitive technology that only a human could have produced. Baloo, like the adoptive wolf family, is reluctant to return the “man cub” to humanity, and Mowgli himself expresses the view that he does not belong there.

Thus the two most racially conscious characters are the villains Shere Khan and King Louie. Both are killed in conflict with the hero, directly or indirectly, so the worst “racism” is symbolically defeated.

The change in endings between the two films is striking in terms of Mowgli’s nature and identity. A half-century ago, Mowgli ultimately followed Bagheera and the wolf pack’s advice to return to his own kind, following a singing girl into the village. Although he was still only a boy, the girl sang of finding a husband and Mowgli seemed quite infatuated with her, so the implication was clear. Not only did he accept his natural group identity, he followed the instinct to propagate his own kind. Kipling’s work also had Mowgli marry.

In the current year, Mowgli does not return to mankind; instead he defeats Shere Khan and unifies the various species for the first time in history. The only contact he has with humanity is to steal a torch, a symbol of humanity which he quickly discards. Mowgli is referred to repeatedly as a man without a people, and for all we know, Mowgli’s line ends with him.

Although the “man cub” is no longer returning to his own biological group, he is still portrayed as something unique in the jungle. His actions are less in line with his nature, but he is still not just a member of a multicultural mass.

On the contrary, Mowgli identifies not only with his human nature but also with those who have raised him and with the jungle he was raised in. Mowgli is not a “global citizen” but belongs to a particular place. His human understanding of technology, although discouraged by the wolves and Bagheera, had allowed him to save the young elephant and to build up a store of honey for Baloo. Ultimately Bagheera encourages Mowgli to embrace this knowledge and “fight [Shere Khan] like a man,” while explicitly telling him that he is not a wolf. During the same confrontation, though, he declares himself as “Mowgli of the Seeonee,” the Seeonee being the name of both the wolf pack and their native area of jungle.

Shere Khan does not seem to understand Mowgli’s identity. In their confrontation near the end of the film, he informs Mowgli that he has no friends and is immediately proven wrong by the surrounding jungle animals stepping forward in his defense. Apparently the most “racist” character is out of touch and cannot understand the group identity of others between species. Despite the wolves having raised and protected Mowgli, Khan expected no solidarity between them in the face of a common enemy.

The new film is not exactly an alt-right piece, but neither is it the creepy anti-racist propaganda that one might expect from a Disney movie about diverse species. Mowgli is somewhat less alienated from the animals than in Kipling’s original work, in which most of the wolves actually hate Mowgli and support Shere Khan killing him. Still, there is no implication that species is just a social construct, or that intergroup differences are simply cooked up by crooked politicians or interest groups. Bagheera’s conviction that Mowgli belongs with his own kind is not portrayed as hateful or hostile.

Contrary to the dominant blank-slate narrative, Mowgli is unique due to his biological nature, including the intellect to teach himself the use of technology. Even Bagheera ultimately recognizes his biology and encourages him to act on it. The hero’s victory is a combination of his inherited capacities and his own agency in applying them, much like success in the real world. For the current year this is a relatively wholesome message.