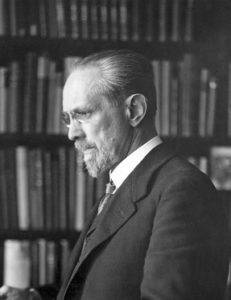 Werner Sombart is an author who deserves to be studied more than he currently is. Sombart furnishes an example of a serious method for studying socio-economic phenomena, one that is far removed from the deformations and biases of materialist sociology (especially of the Marxist type). For Sombart, even economic life is composed of a body and a soul. That is to say, there is such a thing as an economic spirit, distinct from the modes of production, distribution and organization, a spirit which is variable, and which imposes upon those forms a different direction, meaning and foundation, differing from case to case and from epoch to epoch. In his works, including a classic study on modern capitalism, Sombart has emphasized the search for the spiritual factors of economic life, and the meaning that these factors ultimately have conferred upon the latter in the West.

It is not our intention here to provide an overview of his research. We will just mention one particular point, highlighted by Sombart in a book which has also been published in Italian.

We are referring to the form that the economic process has taken on in the period of high capitalism, and with regard to which we must mainly look to America for concrete examples. It is a development that tends toward limitless expansion, because any halt or slowing down would mean falling behind, or being ousted. The immediate and natural purposes of the production process become of secondary importance. Fiat productio et pereat homo! [let there be production though man may perish]. The process from which the great capitalist entrepreneur is unable to free himself, which seizes him body and soul, ends up becoming an object of love, something desired in itself and for itself, constituting the meaning of his existence, of a life that “has no time” for anything else. We are then confronted with a type of man who no longer even questions the ultimate meaning of this race to infinity, this feverish agitation, these chains of economic structures, which often drag the masses along and dictate laws in world politics, while the bosses are no more free than the least of their workers. This situation ends up appearing natural, self-evident. People think it is demanded by economic prosperity and the progress of modern civilization.

Sombart believes, however, that such a state of affairs could never have been consolidated, had it not been for the predominance in our time of inner factors characteristic not so much of a true man, as of the infantile psyche; so that the hidden psychological basis of the whole process is, ultimately, regression. The corresponding traits are indicated in connection with a few characteristic points.

Firstly, there is the fascination with everything big, in the sense of material grandness, of the gigantic, of large quantities. The fascination that this exerts on children is no different from the one it exerts on the great entrepreneurs of an Americanized economy. In general, the tendency to — in the words of Bryce — mistake bigness for greatness, that is, to confuse real, inner greatness with outward size, has become almost the distinctive mark of an entire civilization. In fact, this is nothing but primitivism.

Ultimately, the obsession with record-breaking in all domains leads us back to the same point: the search for something that in tangible, measurable, and hence merely quantitative terms, wins over something else, without regard for different and more subtle factors or qualities. At the same time, this is, according to Sombart, one of the forms in which another infantile characteristic is expressed: the enjoyment of speed, from the spinning top to the carousel. Despite the shift in level and proportions, the fact that it has been exacerbated and multiplied in the world of technology and in many other domains of modern, materialized life, does not deprive it of its original childish character.

Thirdly, the love of novelty has to be considered. Just as a child is immediately attracted to anything that looks new, quickly abandoning a toy that has become familiar, directing his enthusiasm towards another, and leaving one thing half-done as soon as another attracts him, in the same way, modern man is attracted by newness as such, by everything that happens not to have been seen yet. The sensation is reducible, in essence, to the impression felt in catching sight of a novelty. But greed for mere sensation is one of the most characteristic features of the present era.

Finally, for Sombart, there is the feeling of power in situations that psychoanalysis calls “compensation.” It is the joy — again, fundamentally childish — in feeling superior to others on an entirely exterior plane. Our author rightly states: “Analyzing this feeling, one finds that in the end, it is nothing but an involuntary and unconscious confession of weakness: which is why it is one of the attributes of the infantile psyche. A truly, naturally and inwardly great man never assigns special value to external power.”

Sombart, with regard to this tendency, considers a still broader domain, and his observations are worth quoting here: “A capitalist entrepreneur,” he says, “who commands 10,000 men and takes pleasure in this power, resembles a child, happy to see his dog obey his every beck and call. And when it is no longer money or external constraints that ensure direct power over men, we feel proud to have subdued the elements of nature. Whence our exultation in ‘great’ inventions or discoveries. ” Our author adds: “A man of profound and lofty feelings, or a truly great generation, struggling with the most serious problems of the human soul, does not feel elevated because of the success of some technical invention. He will accord only a secondary importance to these instruments of external power. But our age, incapable of understanding anything that is truly great, appreciates only that kind of external power, rejoicing in it like a child, worshiping those who possess it. That is why inventors and billionaires inspire the masses with endless admiration. ”

These factors, as is obvious, play a part everywhere in the modern world; however, they manifest themselves in particular ways in the field of the economy and production, which, after all, was the starting point of it all. It is easy to trace their development not only in the domain of the great capitalist structures, but beyond them, in the tendency to degrade the state itself to the role of a sort of trust, a pure centralized system of labor and insane, excessive production.

As for these latter considerations by Sombart, it would of course be a misunderstanding to interpret them as an attack on the ideals of activity and human self-affirmation in general, in the name of an abstract idealism. It is not activity as such that he is attacking, but agitation, not true self-affirmation, but rather its aberrant forms. There is a limit, beyond which the man who is only turned towards the outside world completely loses control over the forces and processes which he has brought into being. He is then faced with a mechanical process over which he can exercise a certain steering power only by remaining chained to it and increasing day by day his dependency on it. At the same time, it pulls the masses, and finally even nations, into its vortex-like chain reaction. This is precisely the meaning of what Sombart called the ”economic era.”

It is worth adding that there might be forms of power that are not reducible to external bigness and world records, that do not aim for the material and the quantitative, but manifest themselves as the sign and seal of inner greatness, of real superiority. Every trace, indeed the very notion of such power seems more and more to vanish. Perhaps it will be found again, when men will begin to look inward, putting an end to the agitation, the fever of always going beyond, without a clear sense of the object, or the reason of all this activity, of what really is worth human effort, and what is not. Perhaps that will be the point at which everything modern man has created will find a true master, even though the paths leading to it still remain inscrutable.