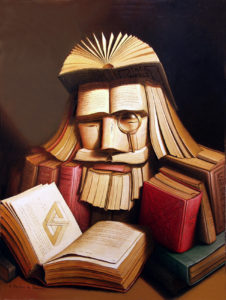 The term “intelligent stupidity” was coined by a distinguished representative of traditional thought, F. Schuon (although G. Bernanos had already used an analogous expression, l’intelligence des sots, and another Frenchman had written that “le drame de notre temps, c’est que la bêtise se soit mise à penser” [the drama of our time is that stupidity has started thinking]), to characterize a form of intellectuality that has come to dominate large sectors of modern culture, and which is strongly represented in Italy. This intellectuality proliferates in the margins of journalism — that scourge of our time — and the literary genre of the essay. The “cultural section” of the big newspapers is one of its main centers of dissemination, and it is exercised primarily in the field of so-called “criticism.”

The main characteristic of “intelligent stupidity” is the absence of principles, of interests in higher matters, and of genuine commitment, while its supreme concern is to be “brilliant” and “original,” attaching great importance to slick and professional “good writing,” to everything that is form and not substance, to esprit in the frivolous and urbane French sense. For the representatives of this “intelligentsia,” the brilliant sentence, the dialectical and polemical statement, have much more value than truth. Ideas, when these people make use of them, are only a pretext; the important thing is to be brilliant, to appear to be extremely intelligent — in the same way that for the politician today, the party ideology is merely a means of building a career. The “vanity fair,” the shabbiest subjectivism, often outright narcissism, are essential components of this phenomenon, and when these cliques of intellectuals take on an urbane tinge (in literary “salons” and cultural associations), this aspect becomes even more apparent. Whoever it was that said that “of all kinds of stupidity, the most annoying kind is the stupidity of intelligent people,” undeniably had a point. When, in analyzing a person down to his very core, we discover that this person is a non-entity, it would really be better if he were not also intelligent.

However, the matter cannot be reduced to the annoyance these scribblers cause; we must emphasize their perniciousness, since “intelligent stupidity” is remarkably organized, especially in contemporary Italy. It is a kind of freemasonry, implanted in various circles, holding practically all the key positions in publishing, wherever these are not already occupied and controlled by Leftist elements. Its representatives have a highly developed instinct when it comes to immediately recognizing anyone who is of a different nature, and promptly ostracizing them. [2]We could adduce a trivial but significant example from the present time. There is a group of intellectuals gathered around a fairly well-produced and widely distributed journal [Il Borghese, a post-war Right-wing journal]. It presents itself as anti-conformist, and likes to criticize the political regime and contemporary mores. But the editors of this journal were careful to avoid contact with the few authors who could have provided it, had it had serious intentions, with a positive foundation in terms of principles and a traditional worldview. These authors are as ignored and ostracized by them as by the Leftist press, precisely because that group feels that they are men of a different type.

This clearly shows that this brilliant anti-conformism is just a means of getting attention and of “dazzling,” while everything really remains at the level of dilettantism. Moreover, the founder of the magazine in question, who died a few years ago, once stated baldly that if a different political regime were in existence today, he would probably have switched camps, just in order to still be part of the “opposition” — with the same goal, of course, of being “brilliant” and showing off his “intelligence.” The group of intellectuals we referred to willingly opened itself to a few people who had shown, initially, a feeling for superior ideas and values, but who then put them aside, so as to better be able to market whatever talent for writing they had. Thus, renouncing all intransigence, these people easily adapted to the line of “intelligent stupidity,” which only impresses the ignorant and those suffering from intellectual provincialism. The example is anecdotal, but very revealing.

It is hardly necessary to point out that the counterpart of “intelligent stupidity” is a lack of character. This becomes obvious whenever its representatives were involved in politics in recent years: opportunism and a chameleonic nature are their recurring characteristics. Once fascists out of convenience, they now parade their anti-fascism, when they at least should have the decency to keep silent, and completely refrain from discussing such matters.

We said at the beginning that “criticism” is one of the main provinces of intelligent stupidity, the one where its most pernicious varieties flourish. Here, as we shall see, we can make a connection with what we wrote earlier regarding multiple subliminal influences coming from the environment [3]. To tell the truth, it is quite an extensive subject. In general, we should single out the “critic” as one of the scourges of modern culture, a scourge that originated in bourgeois civilization, in parallel with the development the publishing industry and the commercialization of culture. Criticism is a phenomenon that has spread like a cancer in our time, but which was nonexistent, or nearly so, in all normal, traditional civilizations. There, on the one hand, there were the creators, the artists, and on the other, there were those who, directly and without any intermediary, judged and appreciated their work: rulers, patrons or simple people. Instead, in our time, an insolent and impertinent parasite, the “critic,” has interposed himself between the creators and the public.

In stating this, we do not mean to say that all judgment concerning artistic productions should be ruled out. We believe, however, that if a judgment must be made, it must be pronounced from a higher point of view, by those whose authority has been conferred upon them by true principles and a tradition. Which amounts to saying that it must be pronounced by a type of persons now almost non-existent (and even if they had existed, their words and deeds would resonate very little in our age). Pace those who propound the theory of art for art’s sake, pace Croce with his horror of any judgment not based solely on the expressive capacity encountered in a work of art — judgments of the aforementioned kind would be made from a point of view that transcends that of art. They would be value judgments taking into account whatever a given work might signify within the totality of a civilization, and not just in a particular domain, or on a purely aesthetic level. [4]Far removed from all of this, “criticism” is now condemned from the start to pure subjectivism and arbitrariness. Today, it is often the critic who manipulates values along the lines of “intelligent stupidity,” being highly skilled at creating an appearance of value where there is none, and concealing it where it does in fact exist. As for the public, we again encounter, in another form, the easily manipulated passivity so typical of our contemporaries (having now become, in the language of democracy, “adult”). We have discussed this earlier [in “Subliminal Influences [3]”].

Indeed, in the artistic and intellectual field, a situation similar to that of advertising and propaganda has come into being. New reputations and new “masterpieces” pop up everywhere, with battages to start trends and fashions. That which has been observed with regard to people who always follow fashion, also applies to today’s public: they are ridiculous from fear of seeming ridiculous. They passively allow their opinions to be prompted and manipulated, they do not dare to openly express what they think and feel for fear of being accused of being philistines or fools, once a verdict has been passed by the pontificators of “criticism” on such and such a work of contemporary art or literature. Whatever differences of opinion and controversies that may exist among “critics,” they never touch upon the essential, their only function being to spice up the dishes served up and artificially generate interest.

This certainly goes for many authors made famous by “critics” — Nobel laureates and bestsellers included — but whose fundamental insignificance would clearly appear if only one had preserved some degree of spiritual freedom, if only one had serious, higher points of reference, and if one from the start had denied all authority to the pontificators of “criticism.” If the tendency to passively and indiscriminately follow the dictates of fashion in hair-style and clothing — what some unknown individual in this or that capital came up with the idea of promoting as fashion — can be regarded as an essentially feminine character trait, the same phenomenon, in the field of art and literature, is not essentially different. It merely re-confirms, on another level, what can be observed in the forma mentis that is now widespread in much of today’s so-called educated public, as well as in everyday life and politics. Again, it is a sign of the times.