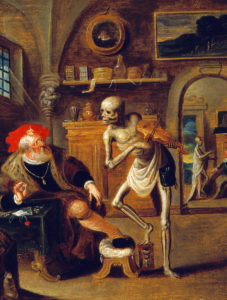 Usura slayeth the child in the womb
Usura stayeth the young man’s courting
It hath brought the young bride and her bridegroom
CONTRA NATURAM
They have brought whores for Eleusis
Corpses are set to banquet
at behest of usura. — Ezra Pound

Clifford Hugh Douglas of Social Credit fame tried to reform a system that was born in 1694 with the creation of the Bank of England. Usury was not new to Christendom, but was frowned upon until its formal adoption in the heady days of the Reformation. The fundamental change brought on by central banks and their usury changed government forever and a new philosophy was required for the population to become receptive to the post-Catholic way of life; for Catholicism and capitalism are mutually incompatible globalist systems.[1]

Douglas must have been quite perplexed as he tried to reconcile his folk memory of Merrie Olde Englande with the more modern Christianity of his day where destitute families were struggling to survive amongst plenty. The Christian hero Martin Luther, the champion of Douglas’ Protestant faith, was probably the villain who reduced so many people to poverty. Professor Carroll Quigley of Tragedy and Hope fame described this new era as being represented to varying degrees by Luther, Hobbes, Calvin, Pascal, and others.[2] In broad agreement E. Michael Jones of Culture Wars, who has nothing good to say about Luther, named Newton, Hobbes and Descartes as the three philosophers that paved the way for the post-Catholic way of life.

The old Aristotelian idea of natural motivation had taught that the four elements have their natural place. But Hobbes and Descartes reduced all natural phenomena to atoms,[3] hence, for example, today’s horrors of the medical industry and factory farming. The overturning of the natural order came about when Newton’s interest in alchemy led him to the discovery of Aristotle’s opponent, Empedocles. While Aristotle had led to Aquinas and the understanding that the Trinity was a form of motion and the template of the universe (that the primary motion of the universe was from God to Himself), Empedocles’ philosophy led to the belief that nature became external to God and God external to nature. The relationship of all things to each other became external and mechanical.

The attack on substance launched by the Cartesians and the Calvinists led to the belief that what God lacked in creativity had to be made up by willpower as the creation had no internal purpose of its own.[4] The established values of the Christian outlook, such as love, charity, generosity, gentleness, or unselfishness, were replaced by the middle-class values which included decisiveness, selfishness, impersonality, ruthless energy, and insatiable ambition.[5] Future preference remained but ceased to be transcendental and became secularized. Self-discipline also ceased to seek spirituality by restraining sensuality and instead sought material acquisition. The post-Reformation outlook of the new middle-class world still had a considerable religious bias, but it was the religion of the medieval heresies and of Puritanism rather than the religion of Roman Christianity.[6] Those wags who insist on needling Christians by referring to the faith as Judeo-Christian are a lot closer to the truth than they realize. The Church itself seemed unaware of the anti-Christian teachings of the Talmud until the 13th century when Jewish converts reported its teachings to the authorities.[7] The Franciscan friar, Nicholas Donin, “a saintly Judaic convert to Catholicism”[8] was the “first person in the history of Christendom to cause the Talmud to be formally put on trial which happened in Paris in 1240.”[9] Sadly, it seems that the Talmud has triumphed.

Voltaire described capitalism as the new state religion,[10] and a hard taskmaster it was. The free lunch of the scholastics was gone.[11] “As the middle classes and their commercialization of all human relationships spread through Western society in the centuries from the twelfth to the twentieth, they largely modified and to some extent reversed the values of Western society earlier.”[12] The world of the scholastics had come from combining Aristotle with Genesis, which led to Aquinas’s description of the universe as a place “fraught with profound economic implications”[13] in the sense that if God provided for the birds of the air then there would be order in the spiritual world and providence for the immortal souls of men. Douglas would be trying to apply this principle of a free lunch. The Reformation was the coming of age for the bourgeoisie, “that detestable race of men”[14] the 12th-century priest Jacques de Vitry had so hated and so vigorously opposed.

The Reformation marked the transition from the Christendom of Merrie Olde England and its philosophy of live and let live[15] to todays’ Christians, whom Pastor Chuck Baldwin said (here) were “as mean and nasty as any unchurched person.” Merrie Olde England had lasted roughly from the time of Aquinas to Luther. The Reformation left England devastated, impoverished, and degraded.[16] The Protestant writer Cobbett would state that the confiscation of the property of the guilds, hospitals, and alms houses, and even the introduction of married clergy, were all calculated to injure the poor and deprive them of their inheritance.[17] Prior to the Reformation the existing two-class society provided security to all. The nobles defended this world, and the clergy opened the way to the next. The peasants provided the food and other material needs of the whole society and everyone had security in their social relationships in that they occupied positions of social status that satisfied their psychic needs for companionship, economic security, a foreseeable future, and a purpose for their efforts.[18] The new middle class that forced its way between the two older classes had none of these things, no status, no permanence, and no security. Psychic insecurity became the keynote of the new middle-class outlook,[19] an outlook that was to change the world forever.

The accumulated wealth of the church was stolen to finance the wars of Henry VIII and to establish the fortunes of a new upper class. The spirit of looting unleashed by the Reformation was carried to the furthest outposts of the young empire, and in India “misgovernment impoverished the people, the savings of long years were exhausted, and when in 1770, a drought brought famine, the resources of the people failed, and they perished by millions.”[20] In Glasgow the rapacious Presbyterian merchants were busy exploiting the American tobacco farmer who resented it and “grew restive under the yoke of British Imperialism. ”[21] The Glasgow merchants were probably as much to blame for the American Revolution as anyone. Plunder was the solution for debt, and just as the king and his cronies plundered the church, the East India Company plundered India, and the Elizabethan pirates plundered the Spanish Main. Today, the corporate pirates plunder through low wages, offshoring, outsourcing, and by population replacement. There appears to be a general consent that the more powerful in practice something is, the less often it is expressed in words. An example being that Christian morals have no place in business.[22] C. H. Douglas was born into this ongoing turmoil.

In a world in which the only realistic means to achieving wealth is by holding a job, the economic views of Social Credit and other distributionist philosophies have always been regarded as pipe dreams for society’s less fortunate. The growing displacement of jobs by automation and robotics may change all that, for a consumer society such as ours requires a prosperous consumer base otherwise investors won’t be able to collect their dividends, the banks will be unable to earn a return on their investments, and the government will be unable to collect taxes to fund its programs. The webzine ZeroHedge recently reported (here) that in an attempt to keep its economy vibrant Switzerland is to consider giving its citizens $2,500 monthly.

In 1620 when the Mayflower landed in America the Reformation had been underway for a hundred years and any remembrance of the former Catholic way of life was washed out by the long Atlantic crossing to the New World. North America, with the exception of Quebec and perhaps Maryland, was to become the worlds’ first predominantly middle class and Protestant country. The Social Credit philosophy admirably suits our Protestant mindset, for before anything can be given away for free the people first have to work to have something to give.

Courage may have been a requisite in frontier America, but a cultural change was already setting in. The basis of the secular society of the early Middle Ages was individual physical force, and every layman, noble, or serf owed military service to the king. With the spread of the mercantile type, however, a change began — the transmutation of physical force into money — and this process went on until individual strength or courage ceased to have importance.[23] A peaceful and inert bourgeoisie more and more supplanted the ancient martial baronage. The pressure of intensifying centralization split the old homogenous populations of England into classes, graduated according to their economic capacity,[24] a phenomenon not unfamiliar in North America. Nothing could withstand the rising monetary power, and to steal a verse from The Foxes Prophecy:

For swiftly o’er the level shore
The waves of progress ride;
The ancient landmarks one by one
Shall sink beneath the tide.

Individuals did stand up to the money power, but the dragon breathed on them, and they were gone. Ezra Pound and Father Coughlin were two of the most courageous. But today, like C. H. Douglas, they are either unknown or figures of ridicule. Individual courage today is futile. A scene from It’s a Wonderful Life is more suitable. The world was closing in on the hero George Bailey when Uncle Billy arrived with the townspeople to donate their pennies to the hero which collectively saved him from the rapacious banker, Mr. Potter.

One last reason for adopting a system such as Social Credit is that a degree of prosperity for all is required for the defense and stability of a nation. The strategic importance of a prosperous population was noticed by Muhammad when he observed “in the Mecca of his own time how a disproportionately large population of the poor, fraught with discontent, could militarily weaken a system.” [25] It was not because they could overthrow the ruling class but because they had no reason to defend it when they came under attack. Solon spotted the same potential catastrophe developing in Athens and by introducing legislation he “stabilized the situation by prohibiting the lending on the security of a person’s body, and decreed a general cancelation of debt similar to the Biblical Jubilee.”[26]

The inspiration for Douglas was his Christian belief. Today, as the not quite Christian West faces yet another major cyclical turning point, it would be rather ironic if the application of Social Credit was to be our secular salvation.

[22] James Peile, The Reproach of the Gospel: An Inquiry Into the Apparent Failure of Christianity as a General Rule of Life and Conduct (London: Longmans Green, 1908), p. 88.