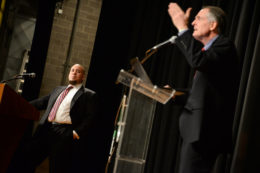 On April 29th of this year, Jared Taylor of American Renaissance participated in a debate at Kentucky State University. The topic, of course, was about whether racial diversity was good or bad. His opponent was political science professor Wilfred Reilly, a portly and stylish young man with what appeared to be a furry animal living on his chin.

During the debate, Mr. Taylor did what Mr. Taylor does. It was a joy to hear him speak. But it was Dr. Reilly’s statements which were most astonishing. You can read the transcript of Mr. Taylor’s opening remarks as well as view the two-hour recording of the entire debate here [2].

With his characteristic stoic eloquence, Mr. Taylor reiterated his central thesis that people are racial by nature and prefer to be among others of their race. He backed this up with plenty of studies and data. He quoted polls. He provided numbers. He discussed racial strife in schools, in the workplace, and on the streets. All to point to his general position that racial diversity is unnatural and leads inevitably to conflict and strife. He also challenged his opponent to produce the concrete strengths of racial diversity, strengths that would be impossible in an all-white America. His speech was clear and direct, and his logic, in my opinion, impeccable.

And all this is great. I believe that fans of Counter-Currents will have no objection with what Mr. Taylor says, but may have problems with what he doesn’t say. As expected, Mr. Taylor, who does not consider himself a white nationalist, stopped short of calling for a white ethnostate. At least we cannot fault Mr. Taylor for being inconsistent.

Regardless, Mr. Taylor presents a formidable challenge for any interlocutor. Dr. Reilly does deserve credit for respecting the free speech rights of someone like Mr. Taylor. He also deserves credit for stepping up, but in so doing he revealed two very striking things about himself: his overall unseriousness and his hatred for white people.

It is the latter which I found so astonishing because I had never seen it so smug before.

Dr. Reilly’s arguments, if you can call them that, consisted mainly of

Dr. Reilly did have a few substantive remarks. He countered Mr. Taylor’s anti-diversity arguments by citing how nations consisting of only one race can be as violent as multiracial ones. His examples, however, will not be terribly persuasive to Counter-Currents readers given that these nations exist mostly in Africa or the Middle East. Given the latest Color of Crime [3] study found on Mr. Taylor’s website, the fact that blacks are violent towards other blacks should come as no surprise and is no argument against white people wanting to live among other whites. Likewise, we know how barbaric Arabs can be, so his listing Syria and Iraq as mono-racial nations with a lot of intra-racial violence is an equally ineffectual argument. He tried to indict homogenous European nations in the same manner (Bosnia and Serbia, for example) but neglected to mention that the intra-racial violence in these places pales in comparison to what goes on in Iraq or Syria or wherever black Africans form communities.

Dr. Reilly also pointed to below-average IQ scores of European immigrants from the early 20th century, and claimed a cause-and-effect between greater assimilation and increases in those scores over time. He then claimed the same could happen for black IQ scores as they become more assimilated. This is absurd for two reasons. He did not mention that the reason for those low IQ scores from over a century ago was because of language difficulties — many of the test takers were not entirely fluent in English. Also, he conveniently discounted the possibility of genetics playing a role in IQ scores without the expertise to do so (our current understanding of the human genome is so incomplete that no one has such expertise).

Dr. Reilly also resorted to a few outright lies, such as when he said that the murder rate for all ethnic groups in America has dropped since the 16th century. This is not true for blacks. According to Stephen and Abigail Thernstrom’s America in Black and White, the black crime rate skyrocketed in the mid-1960s after attaining political equality with whites. It has yet to return to its relatively low 1950s levels.

Dr. Reilly also asserted absurdly and without evidence that ancient African kingdoms such as Mali and Ghana were more advanced than the Vikings, and that presently “some of the highest IQs in the world are found in Nigeria, Ghana, the West African states.” He also claimed that the black crime rate was only twice the white crime rate. This, of course, is balderdash, and easily refuted in The Color of Crime (which Mr. Taylor pointed out during the debate).

Such silliness and buffoonery coming from a university professor should be shocking enough, but what struck me the most was when Dr. Reilly said the following: “I don’t think there will be white people in 200 years. And that’s a good thing.”

He actually doubled down on this prediction by repeating it. To Dr. Reilly, human development will be the merging of everyone into one, big multiracial race. That way, we will inherit all of our strengths. Of course, he dishonestly neglected to mention that racial weaknesses will also be promulgated in his vision of the future.

I am reminded of the central premise of Ward Kendall’s 2004 science fiction novel Hold Back This Day [4]. In it, we have a single world government which is forcefully interbreeding all people of pure racial stock so that the entire human race becomes a single racial mishmash. It’s a terrifying premise, made even more terrifying by the blithe predictions of Dr. Reilly. He at one point described himself as an “upper middle class interracial urban person.” At another point, he revealed that he is part black and part Irish. He has the same powerful frame, polite attitude, and bronze skin of Kendall’s insidious villain Ahmad Yehudit. The similarity was unsettling to say the least.

The central effort of the world government in Hold Back This Day was to wipe out white people since whites are the most successful people on Earth. This improved the stock of many nonwhites but at the same time resulted in the cheapening of the white stock. I believe that Dr. Reilly has similar genocidal intentions towards whites. He doesn’t want to do it violently. He’d rather do it over centuries through miscegenation and racial diversity. This is exactly the claim that Greg Johnson and others on the Alt-Right have been making for years. And as terrifying as it is to hear in a public forum, it is nice to know that our enemies agree with us on this point. As such, our fears of ultimate white extinction become that much harder to dismiss.

Mr. Taylor got more animated than I have ever seen him in responding to such a ghastly prediction. And he did make one great point which Dr. Reilly could not deny. In fact, it is the race-realists who are the true supporters of racial diversity. We want to keep the Japanese Japanese in Japan, and the Indians Indian in India as much as we want to keep whites white in a white homeland. It is Dr. Reilly who wishes to destroy racial diversity through universal miscegenation.

What is almost as frightening as a world without white people is a world in which everyone is just like Wilfred Reilly.