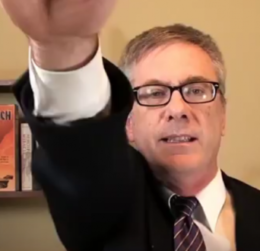 Ramzpaul is basically right in his quarrel with the “1488” wing of White Nationalism. He’s obviously frustrated with purity signaling spirals and LARPing. I believe he’s wrong to accuse 1488ers of being enemy plants, although some of them probably are. I think, however, that his deepest frustration stems from the sense that White Nationalist ideas have the potential to sweep through our society and redefine the political mainstream, were it not for the ease with which our enemies stigmatize them as “Nazi.” (I will use “Nazi” rather than “National Socialist,” because we are talking about stigmatizing rhetoric here.)

Are you worried that our race is in demographic decline? Only Nazis would worry about that! Do you want to secure our borders against criminals and terrorists? Only Nazis would want to do that! Do you think it is crazy that Sweden, Germany, and other European countries have imported thousands of rapists from Africa and the Middle East? Only a Nazi would care about that! Do you think that your country should prefer citizens to foreigners, workers to parasites, decent people to criminals? Only Nazis would think that way! Do you think that whites should start saying “no” to unjust and crazy non-white demands, such as Black Lives Matter protesters who basically demand an end to enforcing laws against black criminals? Only a Nazi would do that. You don’t want to be a Nazi, do you? Then stop protesting against policies that will destroy white people. After all, the only way for white people to atone for the crimes of Nazis is by ceasing to exist.

This kind of rhetoric is so asinine, and the aims it advances are so evil, that it should be child’s play to demolish it. But we have had more than 90 years of anti-Nazi propaganda dinned into us by now, which has created a powerful moral inhibition to think rationally about any policies, no matter how sensible, if they are stigmatized as “just like the Nazis.”

To make matters worse, there are plenty of our own people who happily collaborate in this process of stigmatizing and marginalizing sensible policies as “Nazi.” They jump up and say, “You’re damned right! Only Nazis believe in borders. Only Nazis oppose rape. Only Nazis take their own side in a fight.”

Given a choice between defending policies that are necessary for the survival of our very race — or defending the honor of Adolf Hitler and National Socialism, the 1488 crowd prefers the latter. But this is a perverse and self-defeating move.

Earlier this year, after the mass sexual assaults and harassment of German women by Muslim men on New Year’s Eve, the Mayor of Cologne declared that she was setting up “safe zones” for women at Carnival time. I tweeted the following:

Why can’t all of Germany be a safe zone for women?

It is good propaganda, because the natural answer is “Yes, why not?” We will win when the public’s first reaction to all nationalist policies is “Yes, why not?” Because if every individual should have a room of his own, and every family a house of its own, why shouldn’t every people have a country of its own? Why not?

But imagine a slightly different message:

Hitler was right. Why can’t all of Germany be a safe zone for women?

The initial reaction of most people would be indignation, disbelief, or puzzlement about the first sentence. And very few would go on to read the second sentence at all, much less think, “Yes, why not?” Beyond that, the fact that an opponent of mass rape links his position to Hitler actually lends credibility to the idiotic claim that opposing the rape of German women is somehow a bad thing because it is “just like Hitler.”

The case for racial and ethnic nationalism has never been stronger. Philosophy, science, history, and the news of the day all argue in its favor. Thus it is easy to see why the enemies of nationalism want to marginalize and stigmatize it by linking it to a single central European nationalist movement from the first half of the 20th century. Our enemies claim that Nazism is the only real and authentic form of racial or ethnic nationalism. It is harder to understand why friends of nationalism want to do the same thing.

Why is it the case that even in countries like Poland, Ukraine, and Russia, which suffered terribly at the hands of the Nazis, there are nationalists who identify with National Socialism? I think this is a natural product of anti-Nationalist propaganda. When a population accepts the false equivalency nationalism = Nazism, most people will be deterred from nationalism, but there will always be a small minority who will still embrace it.

Some of these people are attracted to Nazism because they really believe it is evil. Not much can be done with such people. Others think it is true and good, and they will embrace what is true and good regardless of any stigmas. These people are admirable. Such sincere idealists might even believe that they can persuade enough of their fellow citizens to tip the political balance in favor of nationalism. After all, history is made by energetic minorities.

There are two problems with this notion:

So given a choice between option #1 and option #2, the best path to the salvation of our race is clearly #2. Yes, our enemies will always throw the “Nazi” charge our way. But we always have a choice when they do: to help them or to fight them.

For me, there are four non-negotiable principles of White Nationalism: (1) Europeans are a distinct race, the white race; (2) our race is on the road to biological extinction because of bad political policies (white genocide); (3) the only solution is to this danger is to create racially and ethnically homogeneous white homelands; and (4) Jews are a distinct people that belong in their own homeland, not scattered about white homelands. We’ll never save our people by abandoning any of these principles, so we will just have to convert them to our way of thinking.

“Hitler did nothing wrong” is funny as a meme, but it is not defensible as a thesis. And let’s be honest: it is funny because of its chutzpah. There is something bracing about sheer self-assertion in the face of practically the whole world. I was delighted when Charles Manson declared, “The war’s not over as far as I’m concerned.” (Remember, he’s not locked in there with them; they’re locked in there with him.) But the war really is over, although the struggle for European survival goes on. Yes, people build strength by carrying unnecessary burdens. But this is politics, not therapy. And political movements defeat themselves by taking on such burdens.

I once told a friend that I would gladly join his little spiritual honor guard at the crypt of National Socialism, except that I believe that we can actually win. There are a lot of self-defeating attitudes and behaviors on the Alternative Right: alcoholism, drug abuse, LARPing, bickering, internet drama, etc. I believe that people gravitate towards them because, deep down inside, they’re already defeated. They don’t believe we can win; that attitude leads to self-defeating behaviors; and thus their prophecy fulfills itself. Naturally, I would much prefer that they fulfill my prophecy instead: that the Millennials will someday be known as the Greatest Generation, because they will liberate our race and establish homelands for all our peoples.

So, to sum up, I think that Ramzpaul is basically right. But why do I think that it does not matter? Because the 1488ers will never go away, so I think he is wasting his time baiting them. Instead, we need to find a way of accepting their existence and making them into assets rather than liabilities. First, they do attract highly principled and idealistic people, some of whom we can educate. Second, the best way to convert people within our broader camp is not to attack them but to set an example by doing a better job of attacking our common enemies. Third, they make us seem more moderate and centrist by comparison. Thus they can serve as stalking horses, which might scare people into being more accommodating to our approach. Fourth and finally, as Jonathan Bowden often pointed out, the ultra fringes of any political movement generally attract highly energetic and creative people. We can draw upon some of that energy and steal their best memes.