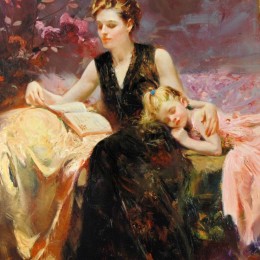 [1]It seems that Donald Trump has riled the waters yet again, this time, by being ideologically consistent on the issue of abortion. While not always having been pro-life (or Right-wing at all, for that matter) it appears that in attempting to appeal to the conservative crowd, The Donald has taken a pro-life stance, though as always, he has taken things a step further — perhaps even too far. Instead of merely paying lip service to the pro-lifers, Trump has taken the stance to the next level by concurring with the idea that women who get abortions should be punished [2].

While this has stirred up the perpetually offended as well as cuckservatives, Trump is just being consistent. If a crime is committed, there has to be a punishment or it is no crime at all. And of course, at least according to the Establishment, women are equal to men in every manner and are therefore capable of being active players and making thought-out decisions all by themselves. Therefore, they should be just as deserving of punishment as the doctor who performed the procedure.

Of course, it isn’t all that simple: despite decades of radical feminism, there exists a gross double standard in which women are to be treated as equal to men when it suits them (e.g., in affirmative action policies for nice, well paid air-conditioned office jobs) and to be treated differently whenever that suits them as well (such as having the first date paid for by the man).

Thankfully, like all Trump controversies, the whole thing seems to have blown over. While Trump seems to have at least partially backed down [3] from, or at least ignored, the issue for the time being, it doesn’t seem to have affected his campaign too much. Chances are the national debate on abortion will remain in a stalemate for the time being, with neither side gaining much ground.

On the other side of the world, however, Europe’s newest “fascist state” looks to be taking a sharp turn to the right on the issue. I speak, of course, of Poland [4].

Poland’s ruling conservative-populist Law and Justice party (PiS) recently angered a large part of the country yet again by considering a total ban on abortion [5]. To put things into perspective, abortion is currently prohibited in Poland with exceptions only for rape, incest, damaged fetuses, or when birth poses a danger to the life of the mother. This ban would effectively force women who, for example, have been raped by their fathers, to either give birth to the child or go to a country where abortion is legal to have the procedure done there.

The proposed ban has, predictably, caused outrage among not only leftists, but many people who are otherwise more politically neutral. This is a shame, because while PiS may be excessively Catholic (in Polish there is the term Katotalib, that is, Catholic Taliban), they are at least more sensible on the issue of immigration than the previous “liberal-conservative” Civic Platform (PO), a party that welcomed refugees, Westernization, and implemented anti-discriminatory legislation, like any good liberal-conservative party would.

This is important because immigration is a civilizational issue, and many Poles and whites in general know this on a visceral level. Poles can see that Western Europe is a mess, and nearly every Pole I have spoken to opposes the immigration of third-worlders and especially Muslims into Poland.

Of course, there are some delusional leftists who lament that Poland is “backwards” and wish for the day where homosexuals can get married, and they will see blacks and hear Arabic everywhere they go. These people are, for the time being, a minority. However, the idiotic ban of the PiS party will make a future election by the unprincipled PO more likely.

Yet the controversy does bring the highly sensitive issue of abortion into the spotlight, and it is an issue we nationalists need to discuss. Poland, like all other European nations, faces a declining birth rate. It is predicted that by 2050, some voivodships (counties) will have shrunken by 20 percent in terms of population, while retirees will make up 40 percent of the population, thus placing a heavy burden on the shrinking tax-paying demographic [6]. Cue the arguments for mass immigration (insane arguments, given African/Islamic migrants’ low human capital and being an intergenerational net drain on welfare, police, and other resources).

However, Poland’s already strict abortion laws have not exactly improved the situation. The birth rate has been decreasing since the eighties, and has been below replacement level since the nineties. The fact of the matter is that even with abortion being heavily restricted, or even banned, it won’t do much to improve Poland’s demographic problem.

And this is why the PiS party’s (and Trump’s) stances are doomed to fail to improve birth rates. While PiS is certainly not a party of cuckservatives and are in fact capable of fighting the Left, they have the unfortunate tendency to attack the symptom instead of the cause, much like their conservative counterparts everywhere else in the world.

While abortion is a terrible thing, banning it outright will not solve the issue of why so many women aren’t having children in the first place. Only by tackling the root cause of the problem can we ever hope to reverse our nations’ catastrophic demographic trends. This leads me to my next point: women need to have their employment prospects restricted.

Ok, ok. I worded that sentence in an intentionally provocative manner. I did it for the lulz. Nevertheless, it is undeniable that a large part of the reason women aren’t having children is their obsession with careers. There is an undeniable correlation between female employment and declining birthrates, even in Middle Eastern countries.

Take Saudi Arabia, for example. While we in the West often see this country as some kind of oppressive, patriarchal state, women have, in fact, been “liberating” themselves by leaving the home and entering the workforce [7] in surprisingly high numbers. Meanwhile, the birth rate has plummeted from just under eight children per woman back in the sixties to just under three children today. Similar trends can be found all over the world, including European countries such as Britain.

[8]And the thing is, women generally want  children. It is a biological need that, if left unanswered, can lead to mental problems [9] down the road, and, conversely, couples with children tend to be healthier [10]. This shouldn’t be surprising, as reproduction — the act of passing on one’s genes and continuing one’s line — is one of the most fundamental biological drives. The consumerist and nihilistic society can interfere with it, but it cannot override it completely.

I have spoken to many women in their twenties, thirties, and even late thirties who want to have children, but still want to “do a lot of things” first. These “things” are, of course, career related. Meanwhile, they seem oblivious to the fact that they have already wasted their prime fertile years being “empowered” in an air-conditioned cubicle. They have sacrificed their ability to continue their genetic lineage and further their kind, and in return they have been given the privilege of working for some corporation that will make them redundant as soon as an opportunity to save some shekels appears.

In the absence of biological children, these women will likely satisfy their motherly instincts with pets or by jumping on some stupid humanitarian bandwagon. Meanwhile, their happiness will continue to decline [11], much to the bafflement of academics who cannot fathom why a woman would be miserable wasting her life away doing Excel spreadsheets instead of staying at home and looking after her offspring.

This dangerous and suicidal pattern will not be easy to reverse. However, in a white ethnostate (or at least an existing European country where a real ethno-nationalist/identitarian party gains power) many of the long-held and cherished liberal ideas will have to be thrown out the window. There will be some situations in which we will have to make drastic societal changes in order to create a stable ethno-state, and some of those changes will mean reversing the gains made by the feminist movement.

That doesn’t mean that women should be banned from working altogether. However, it does mean that the concept of motherhood must be promoted as the most important role a women can have. Employment for women should be either restricted to the most necessary jobs, while working from home should be made easier through various incentives.

This seems radical by today’s standards, and feminists would screech that this policy amounts to “sending women back to the kitchen.” However, feminists, in reality don’t care about women any more than the “Black Lives Matter” movement cares about blacks. Feminists hate womanhood and femininity. If they truly cared about women, then they would encourage women to do what they do best and what makes them happy, that is, have and raise children.

It seems absurd that in today’s age it is considered taboo for women to be encouraged to be mothers, but these are absurd times we are living in. And while it may be some time before we see real and smart nationalists take power and reverse the demographic trends of Europe and the West through sensible policies aimed at banning immigration and encouraging motherhood, we are not entirely powerless to do something even now. After all, we can have children.

The day we have the power to implement the changes we want may still be far away. But nationalists can start reversing negative demographic trends today by having as many children as they can and founding their own strong families as building blocks and models for a healthy society.

We can find comfort in the fact that feminists and other leftist idiots generally have few if any children. I remember distinctly that the two most radical leftist teachers in my high school were both childless. A gender-studies doctoral student I had as a lecturer some years back had one daughter and was unlikely to have any more as she was in the twilight of her fertile years. This is great for us, as it means our biggest enemies, white leftists, will eventually die out, childless. Perhaps we can grant them Darwin Awards [12] for their trouble.

Meanwhile, if nationalists have at least three children (preferably more) we can ensure that a large portion of the whites who are left after the coming turbulent decades are our descendants, and as such they will be instilled with our values and our traditions, and presumably any genes predisposing people to nationalism. The period-smearing feminist, the self-loathing whigger, and the mentally unstable transsexual advocate will die out. Then we will reign supreme.