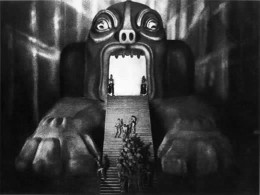 [1]Translated by G. A. Malvicini

They say that in a non-European country, but with an old civilization, an American company, lamenting the lack of assiduousness of the local work force, thought it had come up with an effective incentive: doubling the workers’ hourly wages. The incentive failed: most of the workers showed up to work for half of the previous number of hours. Considering the original remuneration sufficient for the natural needs of their lives, they now thought it wholly absurd to apply themselves more than what, according to the new policy, was enough to procure it.

This is the antithesis of what is called Stakhanovism. This anecdote can be taken as a touchstone for two worlds, two mentalities, two civilizations, one of which should be be considered healthy and normal, the other aberrant and psychotic.

The fact that the example we referred to is non-European, is no reason for anyone to bring up clichés about the inertia or laziness of races that are not of the “active” and “dynamic” Western type. In this, as in other domains, such objections are baseless: it is enough to detach oneself from the paradigm of “modern” civilization to find, here in the West, the same conception of life, the same attitude, the same way of according value to money and work.

Before the advent in Europe of what has been called, officially and significantly, the “market economy” [l’economia mercantile] (significantly, because we know what the status of the “merchant” [mercante] and the money lender was in the traditional social hierarchy), from which modern capitalism was rapidly to develop, a fundamental criterion in the economy was that external goods should be subject to a certain measure or limit, that the pursuit of profit is licit and excusable only when it serves to secure a livelihood appropriate to one’s station. Consequently, a normal economy was essentially a consumer economy. This was also the Thomist view and, later, that of Luther. The important thing was that the individual recognize his membership in a given group and the existence of certain fixed limits or frameworks within which to develop his possibilities, realize his vocation and tend towards a partial, specific perfection. The old corporatist ethic was no different: it emphasized the values of personality and quality, and in any case, always viewed the quantity of work as a function of a certain degree of natural needs. In general, the concept of progress was applied to an essentially inner plane, and did not mean exceeding the boundaries of one’s rank in order to seek profit, or increasing the quantity of work in order to achieve an outer, economic and social, status that was not one’s own.

All of these, then, were perfectly Western views: the views of European man, when he was still healthy, not yet “bitten by the tarantula,” not yet possessed by the insane agitation and hypnotic trance of the “economy,” which were to lead him to the disorder, crises and paroxysms of current civilization. Today, one proposes this or that system, tries this or that palliative, but no one goes back to the source. To recognize that even in economics, the fundamental factors are spiritual factors, that a change of attitude, a true metanoia is the only effective means if one is still to conceive the possibility of halting our rush down this slope — that is an insight that goes beyond the intellect of the technocrats who have now reached the point of proclaiming that “the economy is our destiny.”

But we know where this path leads, a path on which man betrays himself, subverts every just hierarchy of values and interests, focusing on exteriority, the pursuit of profit and “production,” making the economic factor the dominant driving force of his soul. Werner Sombart has perhaps analyzed the whole process better than anyone else. It leads inevitably to those forms of high industrial capitalism, in which one is doomed to a race without respite and an unlimited expansion of production, because any halt would immediately be a step backward, and often means being undermined or overwhelmed. Whence the chain of economic processes which seize the great entrepreneur body and soul, that bind him more than the last of his workmen, while the current, which has become almost autonomous, drags with it thousands of beings and ends up dictating laws to peoples and governments. Fiat productio, pereat homo [let there be production, though man may perish], as Sombart wrote.

This reveals, among other things, what is behind the American “liberation” and economic aid in the world. Truman, overflowing with disinterested love, wants the “economic elevation of less developed areas of the earth”: in other words, he wants to bring the new barbarian invasions to their conclusion, debasing, in the paltriness of economy, all those countries that a happy combination of circumstances still preserved from the bite of the tarantula, safeguarded until today in a traditional form of life, shielded from economic and “productive” exploitation beyond every capacity of man and nature. Mutatis mutandis, America continues to use the old methods: commercial companies accompanied by cannons to “persuade” those who had no interest in trading . . .

The ethic summed up in the principle “abstine et substine” [abstain and endure] was once Western, just as it was the West that betrayed this ethic with a conception of life which, rather than keeping needs within natural limits with a view to the pursuit of what is truly worthy of human effort, instead made an ideal of the increase and artificial multiplication of needs, and hence also of the means to satisfy them, without regard for the ever increasing slavery this implacably leads to — first for the individual, then for the community. There is nothing surprising about the fact that under such conditions, there can be no more stability, that everything falls apart and that the so-called “social question,” already compromised from the start by impossible premises, is exasperated to precisely the point desired by communism and Bolshevism . . .

However, today things have gone so far that every differing view seems “anachronistic” and “ahistorical.” Beautiful, priceless words! But wherever there will be a return to normality, it will become obvious that for the individual, there is no outward, “economic” growth that is worthwhile, and the enticements of which he should not absolutely resist whenever it means the essential impairment of his freedom; that no amount of money is worth giving up a free space, the room to breathe, so as to find oneself again, be oneself, and achieve all that is possible for each man beyond the sphere conditioned by matter and the necessities of ordinary life.

The same principle holds true for nations, especially when their resources are limited. Here, “autarky” is an ethical principle, since what must weigh heavier on the scale of value is identical for both the individual and for the State: better to renounce the fantasy of an illusory improvement in general conditions and adopt, when necessary, a system of “austerity” rather than submit to the yoke of foreign interests, rather than let oneself be dragged into the global processes of economic hegemony and aimless productivity, processes that in the end, when they collapse, will turn against those who set them in motion.

All this, no less, will become evident to those who reflect on the “moral” of the simple anecdote recounted at the beginning of this text. Two worlds, two mentalities, two destinies. Against those “bitten by the tarantula” stand those who still remember what is right activity, worthwhile effort, what is worthy of being pursued, what loyalty to oneself is. Only they are truly “active,” only they are beings which remain standing.