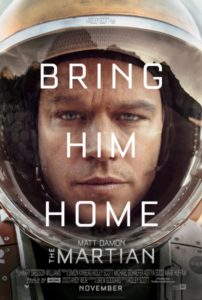 is a superb movie: suspenseful, inspiring, and deeply moving, with an excellent plot, fine performances, compelling pacing, and completely believable special effects. The Martian in set in the near future when space exploration is once again a national priority and manned Mars missions are regular undertakings.

On one such mission a powerful storm forces a six-man team to evacuate the planet and return to their orbiting base ship while they still have a chance. Unfortunately, botanist Mark Watney (Matt Damon) is swept away in the storm and apparently killed, so his crewmates depart without him. Watney, however, survived and is marooned on Mars with a limited food supply and no way to communicate with Earth. His only chance of rescue, moreover, is years in the future, long after he will have starved.

So, after stitching up the wound he suffered in the storm, Watney coolly takes stock of his resources — food supplies, a Martian habitat, a Martian rover, a collection of ’70s disco, freeze-dried human excrement, rocket fuel, etc. — and comes up with a survival and rescue plan. He learns to grow potatoes in human excrement and Martian soil. He modifies the rover to extend its range, then uses it to find an old Martian lander that he can use to communicate with NASA.

At this point you realize that this fairly straightforward and jocular narrative has been sneaking up on you to deliver an unexpected and powerful emotional catharsis. When Watney finally communicates with Earth, we are flooded with his fear and loneliness and relief. You’d need a heart of stone not to shed a tear in this scene, and there are more like it to come.

A rescue plan is set in motion, and although the suspense is often quite intense, there is never really any doubt that the Martian Mark Watney will return home to Earth.

The Martian is a very white, very American movie. Matt Damon is basically a high tech frontiersman — a final frontiersman — who triumphs over adversity using science, technology, and courage. It is also a very Faustian movie, a movie about the exploration of the cosmos, a movie about dedicating one’s life to something bigger than oneself, namely mankind’s ongoing conquest of nature.

But The Martian is a product of today’s film industry, which means that its real virtues are accompanied by two serious flaws. First, the movie advances the false worldview of racial and sexual egalitarianism. Second, the morally and metaphysically elevating themes of the movie are undercut by vulgar colloquialism.

The American space program was the product almost exclusively of white men, with our mastery of science and technology, longing for new frontiers, and rivalry with our enemies. America dropped the torch of space exploration when Jewish and Leftist values became dominant. We now have better things to do than explore space, like giving free cell phones to Negroes and a media megaphone to witches exercised about a scientist’s sinful shirt [3].

The most false and offensive aspect of The Martian is that it postulates that the US space program will somehow revive in a society in which racial and sexual egalitarianism are the dominant values. The main character, Matt Damon’s Mark Watney, is of course white. But his six-man crew has two female members, including the captain, and although five crewmembers are white, the pilot is Hispanic. NASA’s director of Mars missions is supposedly an African-Hindu hybrid played by a black actor. The genius who figures out the rescue plan is also played by a black. (Remember, this is science fiction.) An important scientist is played by an Asian, and when NASA needs help, he kindly intercedes with his uncle who runs the Red Chinese space agency. (In the real world, of course, such a scientist would likely be one of the many Chinese-American spies passing intelligence and technology to the Chinese.) The Red Chinese gallantly offer one of their rockets after the Americans prove that they can’t perform the rescue on their own. A couple important characters in NASA are white women, and so on.

Although The Martian is pro-diversity, one cannot really call it anti-white. The hero and the majority of the cast are highly attractive, serious, and competent white people. No race-mixing is portrayed. And there is a subtle pro-natalism to the film, for one of the astronauts, the German Vogel, has at least four beautiful white children, and two of the astronauts on the mission later marry and have a child at the very end.

Another aspect of egalitarian rot is the pervasive vulgarity of the script. This is a movie about heroism, with a plot worthy of a classic 19th-century novel. But the language and music do not measure up. Lest we idolize Mark Watney too much, he has to be “humanized,” with vulgar language and tastes. At one point he vows to “science the shit” out of one of his problems, which he proceeds to do to a medley of ’70s pop songs. At a certain point, I felt a tightness in my gut and feared that we would soon be treated to a dance montage like in Tootsie or its ripoff Mrs. Doubtfire. Ayn Rand brilliantly satirized this kind of anti-Romanticism as the “I’m sorry I can’t take you to the pizza joint tonight baby, I’ve got to go back to the lab and split the atom” approach to science fiction. The sets of The Martian are clearly inspired by 2001: A Space Odyssey. One wishes the soundtrack was as well. Heroic deeds require elevated words and music.

One wonders how more dignified ages have dawned. The Victorian age, for instance, followed the decadence of the Regency era. Thus those “stuffy” early Victorians were not unacquainted with degeneracy. But at a certain point they took themselves seriously enough to regard their little indulgences as contemptible, as childish, as beneath them. And then they just put them away.

These flaws aside, The Martian is an excellent movie that will speak especially to whites. It is a reminder that White Nationalists are not only working to save our race from the mud but to put us back on the path to the stars.