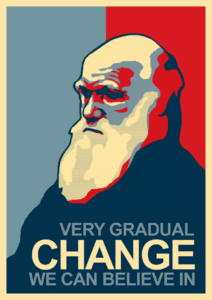 There are two views of human development: those of the Darwinians and those of the Progressives. We in the Alternative Right belong to the Darwinians because we believe in science, the scientific method, and the value of observation and analysis. The Progressives, on the other hand, are repelled by their observations of the human condition and attempt to replace science with a belief system they can manipulate. Progressives are Utopians; while we on the Alt-Right are Realists.

Before I go on, I should explain the Alternative Right is an alternative to the conservative movement which, we believe, has been taken over by neo-conservatives who believe in free trade, mass immigration, nation building, and individual rights above ethnic rights.

We believe the neo-conservative worldview is a recipe for disaster; indeed, for the disaster that has already overcome the world with violence from the Middle East in Europe, America, Canada, and Australia; with the loss of good middle class jobs, with attacks on our heritage and ancestry and with issues of crime and culture shock associated with mass immigration from the Third World. We believe, in short, that neo-conservatism has accepted Progressive globalist goals and attempted to dress them up in conservative clothes.

This is easily proven. Communism, the product of Marxism, sought to expand over the whole world and to impose a top-down governing structure run by socialist elites. Neo-conservatism seeks to establish a New World Order of international free trade, complete with open borders for Western nations for corporations to hire cheap Third World workers, controlled by a small coterie of international elites. In reality, it’s the same totalitarianism in a different color.

The Alt-Right, on the other hand, believes in democratic bottom-up government, the nation state based on an ethnic model, a capitalist national economy, very little immigration, the family as the basic social unit, and a national birthrate of, at least, 2.1 children per family. These are all conservative policies, or rather what were classical liberal policies at the time of Adam Smith. They are now extremely out of favor in the West.

Why we believe in these policies is very interesting. It’s because, as Darwinians, we think the nation should exist as a gene pool, since we come from a European background, a European gene pool. We think the same argument should apply to other ethnic and racial groups. Thus, we support the Kurds in their demand for a country of their own. We support Israel as a land for the Jews, Japan as a land for the Japanese, Congo for the Congolese, and so on. Each race/ethnic group is like an extended family for the people in it, and this large extended family should have a home of its own. Again, this used to be standard fare for Classical liberals, but again it has fallen into disfavor.

It’s fallen into disfavor because utopianism is a very appealing concept and has won many converts. It was the driving force behind Christian evangelism, international Communism, and the United Nations. It appeals to some of the best human instincts (helping others); but it also appeals to some of the worst (something for nothing, negation of human nature, and the manipulative creation of a “new man”). In this latter form, it has become useful to those who are attempting to leverage it to achieve power, such as cultural Marxists, environmental activists, and Left liberals of all stripes.

Let me present a very simple concept at the heart of the Alt-Right movement. If people in a group are genetically similar they will develop a pattern of habits and procedures which they’re comfortable with. This is their culture. Any laws they happen to agree on are designed to catch the exceptions, that is, those individuals who deviate from the accepted norms. In other words, the law is for exceptions to the culture, not a method of enforcing a new culture. Because most people in the group agree on most things, there is a maximum amount of personal freedom.

If, to take the reverse of this argument, you have a group of people who are genetically different, each sub-unit will differ in its culture from the others. These cultures will eventually clash because their laws are based on their cultures and their cultures are based on their biology. To put these different races and cultures in the same political basket is to ask for trouble. In every case where it has been tried, it’s failed. There are numerous examples: India, Ireland, Iraq, Syria, the Soviet Union, Yugoslavia, Czechoslovakia, the United States (white and black America), Canada (our Native problem, the Quebec nation) and, my favorite, the Austro-Hungarian Empire. This latter was an empire based, like Canada’s constitution, on multiculturalism and bi-culturalism. Its spectacular failure led to WWI.

The Alt-Right believes that the maximum amount of personal freedom, the best form of national economy, and most harmonious society can only exist within the boundaries of an ethnically-based nation state. If we seem anxious and upset at current events in the world it is because we see them as a disaster unfolding over which we have no control and about which we are very well informed.

All of which means nothing to most people because if they express an interest in the Alt-Right they’re afraid they’ll be accused of racism. This is a real tar baby in modern discussions on race, even for physical anthropologists who have shied away from making comments on the subject because of the influence of Columbia University physical anthropologist Franz Boas (1858–1942). Boas, whose grandparents were observant Jews, turned the discipline from the study of biology into the study of culture, claiming humans could be changed by social and environmental factors and downplaying the role of genetic inheritance.

However, as I’ve just shown, culture is downstream from biology just as law is downstream from culture. To claim otherwise is to confuse cause and effect. Indeed much of the failure of modern day social programs can be laid at the feet of Boas’ followers, from the Great Society, to school busing programs, to demolished public housing complexes in St. Louis and Chicago. None of these programs worked because none of them dealt with the root cause of the problem.

Surely, after 75 years of failure, someone somewhere needs to return anthropology — the study of humans — to studying humans as the animals we are. We need to study humans at least as well as we do dogs, sheep, cattle or horses. We need categories, we need statistics, we need to establish (actually re-establish) the relationship between these categories and their social and cultural by-products.

Is it racism to study race? I’ll answer that by narrowing the field in question to that of your own family. Is it racist to prefer and enjoy your own family over someone else’s? Is it racist to love your wife, cherish your children, defend your parents? Some leftist thinkers believe it is. Indeed, Cultural Marxists believe the family unit itself should be abolished.

In this semantic and social fight, which side are you on? Are you with those who want to atomize society, remove inheritance, make babies in factories to specifications approved by a ruling elite? That’s what anti-racists are calling for, working for, demanding for us all. Consider what their ultimate goal is: a world of individuals stripped of any biological relationship, the race-mixing of all Western cultures, and thus the extinction of Europeans as a distinctive race. This is the truly horrifying end game of anti-racism.