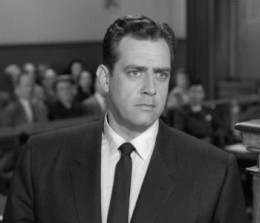 [1]One of the most successful and long running television shows of the 1950s and ’60s was Perry Mason. Part police procedural and part courtroom drama, it was in many ways a harbinger of the spectacularly popular Law and Order series of the 1990s. Raymond Burr starred as the eponymous chief character—a cool, suave, and courtly Los Angeles attorney whose energy and sheer intelligence always managed not only to save a wrongly accused client, but also to reveal a crime’s true perpetrator. Perry Mason had an uninterrupted run from 1957 to 1966. The story lines were largely formulaic and predictable, but viewers couldn’t get enough of the program. Ever since its premature cancellation, reruns of the show have been in almost continuous syndication right up to the present day.

Much of the series’ popularity had to do with the persona of its main character, superbly played by Raymond Burr, then at the height of his career. The attorney Perry Mason was a paragon of legal intelligence and forensic ability. But he was even more than that. And it is a matter worth exploring, as a key to understanding our current cultural degradation, why his character would be despised and denigrated now.

The sophisticated and urbane Perry Mason is a modern version of Baldassare Castiglione’s Il Cortegiano [2]. All the important details given in that famous handbook of 1528 are present in his character. Mason is learned and well spoken. His dress and manners are impeccable. He is totally self-controlled and unflappable, never losing his temper or giving way to frustration or helplessness. He treats all persons (especially women) with the deepest respect, is meticulously honest, and quite generous. He is knowledgeable on a wide range of subjects, an excellent conversationalist, and an astute judge of personalities. He is daring and resourceful, but also self-effacing. Moreover, he doesn’t make a single gesture or movement that isn’t the soul of sprezzatura, the quality of effortless nonchalance that Castiglione describes as the prime mark of the perfect courtier.

Well, of course the screenwriters deliberately created Perry Mason to be this way. But why they made these choices is the crux of the matter. The fact is that our image of what the perfect, gentlemanly male should be, from Castiglione’s day right to the middle of the twentieth century, had remained remarkably stable. The Renaissance courtier in the palace of Duke Guidobaldo of Urbino in 1528 was still at the heart of our ideal portrait of what a man should be in 1957.

What happened? Why did that constellation of ideal qualities grow dim? There were several reasons, but much of it had to do with the triumph of gritty authenticity, contempt for manners, sexual vulgarity, and disdain towards any sort of learning or sophisticated use of language. An alien and barbarous antitype to Perry Mason was lurking in the shadows, ready to be born.

First of all, even in 1957 new heroes were in the making. A competing ideal of masculinity was represented by the tedious James-Dean-and-Marlon-Brando school of angst-ridden macho posturing. This alternate male hero was a troubled, inarticulate, demon-driven “rebel” who was prone to emotional acting out and existential whingeing. Such a male was the polar opposite of Castiglione’s refined icon of polished self-control conjoined with cultural achievement, and in fact the Dean-Brando male would have been considered an immature buffoon by the author of Il Cortegiano. And many persons in 1957 shared this view, as evinced by the numerous contemporary spoofs and parodies of James Dean and Marlon Brando. We like to forget that the vast majority of the population in 1957, apart from addlepated teens, considered Dean and Brando to be no more than ill-bred schmucks.

A related type of male hero was being created by Ian Fleming and Mickey Spillane. The James Bond/Mike Hammer man was gaining traction—the first as an omnicompetent espionage agent with flashy, jet-set tastes and attitudes; the second as a tough-talking, street-smart rowdy given to punch-ups and wise-ass banter. Both were arrogant, combative, and cynical, and neither had much respect for women except as potential fornication partners. Castiglione would have seen them as vulgar peasants.

All these nascent new male idols represented a major rejection of Castiglione’s ideal in crucial respects—the first type lacked self-control and calm dignity, while the second lacked gentility and balance. James Dean and Marlon Brando were adolescent misfits; James Bond and Mike Hammer were sybaritic Lotharios and sensualists. One might be intrigued by their capers, but one couldn’t really respect them as serious male role models.

Well, all that changed, and pretty quickly too. The cultural and moral syphilis of the 1960s came along, and suddenly no one wanted to be like Perry Mason. Men wanted to be “real” and “authentic,” which usually meant doltish and unshaven. Self-control and restraint were perceived as uncomfortable and repressive hang-ups that thwarted honest feeling and expression. Add to this mix the sociopolitical antinomianism of the times, and you get the repulsive 1960s male hipster—the longhaired freak with a brush mustache, sideburns, a leather slouch hat, and an appalling Cheech-and-Chong apishness. Proudly defiant in his vulgarity and ignorance, this churlish male was an absolute repudiation of the courtly Perry Mason. The new icon of masculinity was glandularly driven, visceral, narcissistic, sexual, emotional, passionate, and crude. His speech was mostly grunts, punctuated with jargon-laced hippie clichés. I lived through the 1960s, and I saw these vermin up close. It wasn’t a pretty sight.

But it wasn’t just the Dean-Brando, Bond-Hammer figures who brought about this melancholy change. The other culprits were the feminists. Second-stage feminism played a major role in redefining masculinity downwards.

All feminism has a strong anti-male undercurrent in it, sometimes masked and sometimes overt. Any feminist who tries to deny this is lying through her teeth, and she knows it. But the prejudice manifests itself in a specialized resentment of certain male types more than others. Let’s look into this.

Feminists talk a good game about how much they hate violent and abusive men, but as a matter of fact their most powerful and deep-seated animus is not against such types. Instead it is directed against self-assured, competent, and quietly effective men who accomplish things without a lot of fuss, bother, or talk. It is the unworried, cool, dignified man—a man who isn’t flustered and flummoxed by anything—who gets under their skin. Feminists disguise the real nature of their resentment against him by saying that he is “cold,” or “unfeeling,” or “aloof,” or “non-committal.” But that’s not a valid description of the actual source of their anger and fury. What truly enrages them is that, like Castiglione’s courtier, such a man (while maintaining the appropriate civilities) is never going to be guilt-ridden enough to cave in to feminist demands. He will just go about his business with supreme confidence, and without taking part in any of the arguments, debates, whine-fests, or confrontational dust-ups that feminists crave. He is above all that. And this sets feminist teeth on edge.

This is why a character like Perry Mason could never be popular in a feminist-dominated environment. He’s too cool and calm. He’s too adept and skillful. He’s too confidently male. Such a figure baffles and stymies women whose prime impulse is to think up new indictments for male misbehavior. Feminists would rather have what we have now: demasculinized and wimpish boy-men given over to sensitivity, subjection, and perpetual apology; or absurdly overmasculinized and violence-prone men who function as crude and dangerous—but generally satisfying—studs. That’s what’s mostly available for women these days: swishy metrosexuals and boorish thugs. But a real male of ability, confidence, and pride, as represented by Castiglione’s courtier or by Perry Mason? No—he doesn’t suit the new ideology.

A few years ago I read an article by a young woman complaining about the sort of men she disliked. She said words to this effect: “I hate the kind of well-dressed white males you see in French airports, who carry their own luggage and walk briskly towards their destinations without noticing anyone or anything around them!” All she could come up with as a reason for her dislike was that these men appeared to be “arrogant” and “insensitive.”

And here is the clue to understanding why Castiglione’s courtier is now a forbidden role model. For in spite of all his courtesy and good manners, the courtier is still aware of his male capacities and he is not ashamed of them. He won’t be a crude thug, but neither will he be a pansy-ass metrosexual talking about his “feelings,” or agreeing with you about the patriarchy. That makes him a hated enemy.

Feminist dislike of Castiglione’s ideal courtier is ironic, because Il Cortegiano is a pivotal text in the western world’s understanding of the complex relationship between men and women. It’s the first major book, after Plato’s Republic, to debate at length the question of female social subordination. It’s the very first book to address with complete candor and honesty the double standard in sexual expectations. It’s one of the first books to discuss the differences in male and female sexual desire, behavior and activities, and dress and deportment. A book like Il Cortegiano is truly seminal, for it plows and sows the field for all later discussions of male-female interaction. (Sorry, ladies—is that last sentence a “micro-aggression”? If it is, tant pis).

The symptoms of this major cultural shift can be seen all around us. The palpable disdain for and hatred of white males is now so blatant that it will soon become impossible for our mainstream media to ignore. The drumbeat of fanatical feminist ideology in our colleges has already driven thousands of male students to drop out. Rage against the well-spoken, articulate man now means that even arguing against feminist absurdities will set a male critic up for a bogus harassment charge. War has been declared on the courtier.

Well, there are always those Perry Mason reruns. We can watch them and see what real men in the tradition of Castiglione’s courtier—cultured and civilized men—used to be, not so very long ago. And if modern women choose to have metrosexual nancy-boys or ghetto thugs as their preferred companions, well . . . that’s revenge enough for the few remaining courtiers.