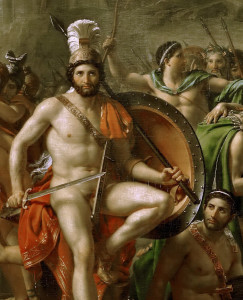 In On Genetic Interests, Salter provides some impressionistic (qualitative) graphs interpreting how different ideologies distribute interests along the continuum of Self-Family-Offspring-Humanity. Putting aside minor quibbles (both offspring and ethny can be more fine-grained categories with different levels of relatedness — offspring can be extended to the entire family, including distinctions such as brother vs. cousin; ethny can have ethnic group vs. race, etc.) this is a quite useful instrument to think about the relationship between memes and genes, and how cultural artifacts and social technologies affect our genetic interests. These charts are an underestimated and under discussed part of the book; besides myself, the only other person I know of who tried to discuss this in a useful fashion is Bowery on a blog post from several years ago.

I’ll likely have more to say about this in the future — including a defense of the national socialist interest distribution — but for now I would like to comment on a key feature of System-approved ideologies — that they skip over ethny as a legitimate focus of interest. Included in the ideologies that Salter (justifiably) claims do this are: (radical) Christianity, Humanism, and Communism, as well as Multiculturalism as practiced by majority groups (Capitalism he has as skipping both ethny and humanity and it will not be a topic of this discussion).

One can attempt to look at this from a logical, objective standpoint, a standpoint that values consistency and a fair distribution of interests along the chain of biological relatedness.

Salter has (radical) Christianity not only eliminating all interest in ethny, but also suppressing interest in self and offspring, consistent with the life-denying, masochistic nature of the creed. Communism depresses interest in offspring while eliminating it for ethny, also demonstrating maladaptive aspects. Even so, for both, they at least pay lip service to a minimal investment in self and offspring (it is low, but not zero) — even the most radical of the System’s approved ideologies (yes, Marxism is approved — compare how a Marxist academic is treated compared to a “Fascist” one; and the form of Christianity most valued by the System is the most self-effacing and maladaptive kind) dare not completely eliminate self and offspring as categories of interest. They may wish to do so, but that is a “bridge too far,” so to speak.

Despite continuing far-left attempts to promote (White) self-abasement and to deconstruct (traditional) families, the natural impulses to preserve and protect self and offspring (even if Whites are not reproducing themselves) are still too strong. Hence, the general lack of interest in radical Christianity and, even more importantly, the movement of the Left Core away from doctrinaire Marxism toward a more “cultural Marxist” memetic structure that emphasizes humanist and multiculturalist values that target ethnic interests for attack while for the most part preserving interest in self and offspring.[1]

Thus, of greater interest for this discussion are “Humanism” and “Multiculturalism as practiced by majorities” as the major vehicles for the System’s Left Core ideology (apart from atomized Capitalism; see note 1). Here, we see an acceptance of basic human nature regarding self and offspring (the most intense repositories of genetic interest — note, not the largest repositories, but most concentrated, intense, and linked to emotional responses). Instead, the target is specifically ethnic interests. It is accepted that a (White) person should invest in self and offspring and also take a strong interest in humanity; but any interest in ethny is viciously attacked by social pricing, “hate” and “racism” laws, and social engineering to completely delegitimize the pursuit of group interests by European-descended peoples.

Given that we all agree on the importance of self and offspring, we need not talk about those any more now. Instead, let us focus on the System’s meme that pursuit of ethnic interests is illegitimate but pursuit of pan-human interests is perfectly legitimate and, indeed, laudable.

We can consider a thought experiment that underscores the hypocrisy — and the ethnic aggression — underlying such arguments by demonstrating that there is no logical, objective reason for making this distinction. Virtually every argument used to attack ethnic genetic interests can also be invoked, given the correct context, for human genetic interests.

Imagine an alien invasion of Earth, with these outer space aliens intent on displacing (demographically, socially, politically, in every way) humans as the dominant sentient species on Earth. Imagine these aliens want to use some humans, particularly human elites, to assist them in their agenda of conquest. Other humans fight the aliens; indeed, some sacrifice themselves in order to save humanity. How would this scenario be viewed?

I guarantee that there would be near-unanimous agreement across the political spectrum: the traitors are despicable, the altruists are honorable, and “of course” we must fight for humanity and preserve the Earth for our patrimony. Indeed, some may even say fighting for humanity is not truly altruism, since we as humans have a strong vested interest in the survival and prospering of our species.

Further, I assert that this position would be held as well by HBDers, Desi “cognitive elitists,” and their White extended phenotypes, Salter-hating Jamaican mongrel bloggers, and all the rest, including the Left.

But we can ask: how is this different from the case of defense of ethny? Why can’t we say that the self-sacrificing fighters for humanity will be outcompeted by free-riding traitors? Why is preserving humanity adaptive? Why, we may even have folks muttering about “green beard effects” and parsing the difference between “identical by descent” and “identical by state” (identical is not identical according to HBDers, you see) — all sorts of rationales. Indeed, preserving humanity is simply “a preference” not more salient than a taste for toffee or an admiration for Mahler — right?

The same people who argue against EGI on the basis that “human groups are virtually genetically the same” would probably be unconvinced by alien claims that dispossession of humans is no problem given that the great apes will be left unmolested and, by alien standards, humans and chimps are virtually genetically identical. Further, if the aliens claim that there is “greater genetic variation within the human family than there is between humans and aliens” would that make the dispossession of the human race any more palatable to the same humanist-multiculturalist-HBD types who use all these same arguments to delegitimize Eurocentric activism?

Of course, the Left-HBD faction need to get their memes straight. Take the argument that “there is more genetic variation within than between groups and there is virtually no real biological differences between human groups.” Very well. But, doesn’t that mean that investing in a single ethny has a great cost-benefit ratio? After all, according to the anti-EGI crowd, a single ethny contains more genetic variation than that found between groups; indeed, we are told that the vast bulk of human genetic variation is found within single population groups. So! All you need to do is preserve one group and you have virtually all the genetic variation right there. No need to preserve all humanity. Why, after all, groups are all the same, aren’t they? And isn’t it easier to invest in a single ethny, concentrating your investment there, than to dilute it over all humanity? Indeed, if we are all the same, then investing in humanity is a superfluous waste of resources. Save a single group, reap the benefits of all that internal genetic variation and diversity, and if the rest of humanity is lost, no problem — no differences between groups anyway. QED.

However, that argument would never be made by the anti-White Left and the anti-White HBDers. Instead, we’ll get talk about the “rich and diverse tapestry of humanity” — but when that tapestry is interpreted as including Europeans, watch the cognitive dissonance unfold and suddenly we are all the same and why be so concerned about individual groups. Genetic and diversity arguments shift back and forth and the only unifying theme is that whatever bolsters investing in humanity over ethny, and more specifically, whatever delegitimizes the pursuit of White interests, is the meme promoted.

Getting back to the arguments supporting betraying humanity to aliens, of course, I doubt any of these Left-HBD specimens would dare make such arguments. Therefore, we see a clear case of the legitimacy of the defense of ethny being specifically disregarded, specifically targeted. For some reason — one that cannot be based on logic or objectivity — self, family, and humanity are considered worthwhile for defense, but the other link in the chain of interests — ethny — is somehow considered an illegitimate focus of interest or concern.

Well, let’s be honest — that’s not the case for everyone. For most peoples, a concern for ethny is acceptable — it is only for European-derived peoples that the ethny part of the chain of interests is skipped over, not legitimate, not considered as valid. It is ONLY and specifically White ethnic interests that form a gap of interest, it is only for Whites that the chain goes self-offspring-humanity, while for every other group it is self-offspring-ethny-humanity. This is proof positive that the delegitimization of White ethnic self-defense is not only illogical, but is an open attack against White interests, it is form of memetic warfare against the entire race as part of inter-group competition and as part of free-riding by White traitors.

Of course, the same arguments against ethnic genetic interests can be applied, following the course of “Left Logic,” to delegitimize pursuit of the interests of self and offspring, bringing us back to radical Christianity, extreme Communism, etc. — which promote decreased investment in those categories in favor of an indiscriminate humanism. There is a consistency in leftist memes in which, ultimately, carried to their “logical” conclusions, every human distinction is eliminated.[2]

To summarize: pursuit of genetic interests at every level of one’s continuum of relatedness is objectively and logically legitimate, and can be adaptive, particularly dependent upon context. There is absolutely no objective or logical reason to pick one chain in the link, in this case ethny, to be specifically disregarded. Arguments against the pursuit of ethnic genetic interests could just as easily be used, dependent upon context, against humanist universalism. Indeed, many of the same arguments can be made against the interests of self and offspring (a child that uses so much resources that it prevents its parents from producing more children — egads! — interfamilial free riding!). Arguments that the pursuit of ethnic interests is wrong because of “wars, conflict, and bloodshed” ignore that the bloodiest ideologies in human history have been egalitarian humanist ones (starting with Communism at the top of the list), that multicultural diversity leads to conflict, and that even at the level of self and offspring, people have been historically violent (how many murders are committed for selfish and familial reasons?). The hysterical denunciation of, specifically, ethnic genetic interests is illogical. Given that this attack on EGI is most often targeted to Whites (usually implicitly, but sometimes explicitly — “Whites acting as Whites have caused unique oppression in human history, blah, blah, blah”), anti-Salterian attitudes are revealed to have an inner core of ethnic aggression against Whites and White interests.

1. While Capitalism is not part of my analysis at this time, I note that the System likes to promote hedonistic, selfish, atomized individualism for Whites to the extent that Whites are not consumed by humanist values. In other words, either be a Humanist who disregards ethny in favor of humanity, or be a libertarian Capitalist who disregards ethny and humanity (and to some extent interest in having children) in favor of self.

2. Which makes one wonder about human-alien distinctions — who would be overrepresented among the pro-space alien traitors to humanity — Leftists who deny the importance of human-alien differences, or atomized, hyper-individualistic Capitalists eager for their thirty pieces of silver?