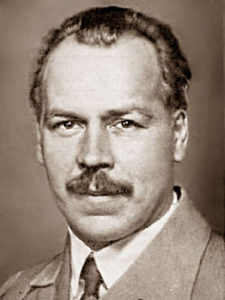 One of the episodes that best characterizes the spirit of Bolshevism is the so-called “Vavilov case.” Professor Nikolai Vavilov was a Russian biologist who was deported to Siberia along with other colleagues of his, not for strictly political reasons, but simply for being an exponent of the theory of genetics. Genetics is a branch of biology that admits the existence of pre-formation in human beings, i.e., of predispositions and traits that are internal, congenital (based on “genes”), not derived from external factors.

Genetics was declared “counter-revolutionary.” Marxism has it that everything that a man is, is the result of environmental factors — economic and social forces and conditions in particular. On this basis, communists seriously believe they can create a new humanity, a collective proletarian man, liberated from “the individualistic accidents of the bourgeois era.” This assumption, however, would be thwarted if one were to admit that man has an inner form, that persons exist, with their own nature, their own quality and, so to speak, their own fate, rather than the atoms of a mass ready to be subjected to an external, mechanical action, through which the desired collective would be produced. A timely campaign, led by a Marxist biologist, Trofim Lysenko, exposed the dangerous seed of heresy contained in the theory (albeit merely anthropological) of genetics, and Professor Vavilov was whisked off to Siberia, the place where minds are “re-educated” in Russia today. One of the theories that best expresses the North American mindset is “behaviorism,” in combination with the views of John Dewey. According to this theory, anyone can become whatever they want, by undergoing an appropriate pedagogical and technical process. If a particular person is what he is, if he has certain talents, if he is, say, a thinker, or an artist, or a statesman, it does not depend on his nature, and is not the sign of any real difference. Anyone can be like him, if they only really want to, and if only they know how to “train themselves.” This, clearly, is the truth of the self-made man, extended from the level of practical success and social climbing to all other domains, corroborating the egalitarian dogma of democracy. If such a theory is valid, one can no longer speak of real differences, differences in nature and of dignity. Every man can presume to possess, virtually, everything that another man is, the terms “superior” and “inferior” lose their meaning, every feeling of distance and respect becomes unjustified, every path is open to all, one really is in a condition of “freedom.”

Thus, we are faced with a fundamental view in which Bolshevism and Americanism coincide. Like the Bolshevik-Marxist ideology, the American theory expresses an intolerance with regard to everything in man that has a face, an internal form, a distinctive and unmistakable quality. Correspondingly, the organic conception is countered with a mechanistic conception, since everything that can be set up starting from almost nothing can only have the character of something “constructed.”

It is true that in the American view, there is an appearance of activism and individualism which can be misleading. But in practice, one sees what this really means, in Americans. They are the living refutation of the Cartesian axiom, “I think, therefore I am,” since “they do not think, and yet they are.” Infantile and “natural,” the way a vegetable is natural, the American psyche is perhaps even more formless than the Slavic psyche. It is open to every form of standardization, from the Reader’s Digest type of culture to social conformity, manipulated public opinion, advertising and the delusion of democratic progress. It is against this background that the theory mentioned previously must be understood. The counterpart of “I can be what anyone is” and egalitarian education is a qualitative regression: the man who has become inwardly formless.

This man, then, is what both communism and Americanism want — setting aside differences which do not concern the essential. The two views which we have spoken of have both a symbolic value and an aggressive vector of efficacy. They are both a categorical contradiction of the traditional ideal of personality, and they attack, at its foundation, everything in which man today can still find a defense and a means of reacting against the chaos of his civilization.

Indeed, at a time in which not only idols have fallen, but many ideas and values are compromised by rhetoric and inherent insincerity, only one way still remains open: to look within oneself for that order and that law, which have become problematic in the surrounding world. But this also means: being able to find in oneself a form and a truth, and impose it on oneself, realize it. “Know thyself in order to be thyself” — this was once the watchword of classical civilization. “May our thoughts and our actions be ours, may the actions of each man belong to him” — wrote Plotinus, and the Roman-Germanic world, up to Nietzsche, upheld the ideal of inner form, of difference, of fidelity to what one is, in opposition to every tendency towards disorder.

Does all this pertain only to the domain of individual ethics? Hardly. If we look for the root causes of the current disorder, rampant in the economic and social field to the point of precluding any possibility of a healthy, balanced existence, we find them in the mass betrayal of the aforementioned traditional ideal. Men do not know and no longer want to know what they are, and hence no longer know the place appropriate to them in the whole, in the fixed framework within which they can, without being distracted, develop their being and its possibilities and realize their own perfection, enough to really endow their lives with meaning and interiority, and at the same time actualize the part that corresponds to them in a hierarchically ordered world. Is this not what paved the way for the “economic era,” culminating, on the one hand, in the paroxysm of unbridled capitalism, and on the other, in livid class hatred? Is it not in this way that we have arrived at a world composed mainly of the agitated and the displaced, a world in which what matters is no longer “being,” but getting to this or that position?

But if that is the case — and if one reflects a little, it is impossible not to recognize it — is one not deluding oneself and deluding others when one sets one’s hopes in the power of one system or another, before there has been a detoxification and rectification in the internal domain of attitudes, interests, and the meaning of life?

Of course, this cannot be expected of the majority, and it cannot occur instantaneously. It is, however, always possible to provide the best men with an orientation. One can show that when one no longer has one’s own path, when one gives in to the fascination of external forms of growth, self-affirmation and production, one opens oneself to the forces that, even on the biological plane, turn the Marxist and democratic doctrine into a reality: the doctrine of formless being, of a world of atoms, of masses and mud, instead of men and faces. Whether to stop, and find once again the foundation for a just strength in one’s own way of being and in one’s own balanced tension, or — despite believing that one is doing something completely different — to give new fuel to a collectivizing process that is now consuming the world everywhere, is what each man must decide for himself, but it is also a premise, if what he might represent in political struggle is to acquire a real basis, a form and a prestige and, ultimately, determine the structures that must exist between men and the leaders of men.