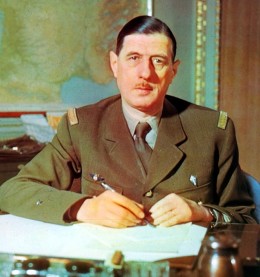 Charles de Gaulle is a central figure for the legitimacy of the current French regime, being considered “the most illustrious of Frenchmen” in the twentieth century. He earned this for his role in putting France among the victors of the Second World War and in being the founding father of the Fifth Republic, a semi-presidential regime reputed to be more stable and effective than its parliamentary predecessors.

At least in the postwar era, France was never so prosperous, prestigious, and powerful as under De Gaulle’s reign. Today, many of France’s flagship projects bear the General’s name, from Paris Charles de Gaulle Airport to the French Navy’s sole nuclear aircraft carrier.

De Gaulle is however a complex and divisive figure for French patriots and men of the Right, attracting both reverence and loathing. He was opposed and often detested for siding with the liberal-communist Allies in the Second World War and purging the French Right for a generation. As postwar president, he is faulted for abandoning French Algeria and leaving its 1 million European settlers no other choice but to ethnically-cleanse themselves, so to speak, by fleeing the country.

The younger generation of French nationalists however tends to have a more favorable view of De Gaulle. He is ostentatiously embraced by the Front National’s new leaders, such as Marine Le Pen’s controversial spin doctor and civic nationalist Florian Philippot, who makes a show of placing wreaths on the General’s tomb in Colombey-les-Deux-Églises. Alain Soral, the renowned civic nationalist and gentile rights activist, has also contributed to the De Gaulle cult, although adding that his role as postwar president was “more respectable” than that during the Second World War. President de Gaulle achieved some successes in emancipating France from the American Empire and instituted an almost non-aligned foreign policy, for which he enjoyed considerable prestige and attracted considerable praise, sometimes from unlikely quarters (e.g. National Socialists such as Francis Parker Yockey).

De Gaulle is also a rather awkward figure for mainstream political correctness, given the culture’s drift ever-further to the Left since the Second World War. Only men of rather extreme personal ethnocentrism and authoritarianism, such as Winston Churchill and De Gaulle, could have the resolve and will to defeat Adolf Hitler. Thus, these men were recruited by those forces in Great Britain and America which were opposed to the Third Reich. Yet, by the same token, Churchill and De Gaulle were therefore, by the standards of today, vicious nationalists, imperialists, and racists. Both had a rather callous attitude towards human life, believing mass deaths in war were justified by reasons of state. Theirs was the harsh imperial morality of the Victorian era, implying politically-incorrect views they would keep until the end of their lives. The young De Gaulle was adamant that the loss of life of the First World War, which struck France particularly harshly, was no reason for too much soul-searching, loss of martial spirit, or withdrawal from great power politics. This is rather jarring for a soft postwar European raised in the solemn cult of self-abnegating peace above all (“never again”).

De Gaulle’s theory and practice of government were rather authoritarian (instituting an astonishing seven-year presidential term, for instance), opposing parliamentary politics and founding his legitimacy not so much on elections as on an epic national narrative. De Gaulle famously believed that France was racially white (“otherwise France would no longer be France”), that Arabs could not be assimilated en masse, and that Europe herself was defined by whiteness, this common ancestry and genetic heritage being one of the rationales for a European community of nations. He also, notoriously, publicly called the Jews “an elite people, self-confident and dominating.” [2]

There is something compelling about De Gaulle’s personality, at least by the standards of the mainstream politicians we are allowed to revere today, and yet something vainglorious too. When I look upon his life, thought, and works, I almost feel as though at the foot of a mountain, something very great to be scaled. Yet the numerous works on De Gaulle tend towards hagiography – a typically unenlightening and downright boring genre – and there is a distinct tendency to overlook the more prosaic (though if anything more interesting) realities of the man, let alone his failings. And what failings? We could ask: What, in the grand scheme of things, did he ultimately accomplish? What remains?

That is what I would like to examine in this article. I believe this can be understood by looking at the two sides of De Gaulle’s personality and career: De Gaulle has been considered both the greatest democratic politician of the twentieth century (e.g., Richard Nixon’s boyish admiration for the young De Gaulle’s powerful Nietzschean essay The Edge of the Sword) and the world’s pettiest would-be dictator (e.g., the parliamentary politician François Mitterrand’s scathing critique in Le Coup d’État permanent). Perhaps that distinction gets to the heart of the matter: even a moderate and temporary dictator appears a titan besides the worms that are our current “democratic politicians,” but a democratic politician, ultimately, can only be a slave of wider cultural and sociological forces.

An Exorbitant Cost: France in the Second World War De Gaulle’s historic career begins rather late in his life, in 1940, as an almost 50-year-old recently-promoted French general, who has somewhat mysteriously fled to England. He had ghostwritten for Marshal Philippe Pétain, that hero of the First World War, before falling out with him. De Gaulle had otherwise had a generally unremarkable career as a military officer. In London, De Gaulle rejected the prospect of a broken France under German hegemony, prophesying an Allied victory through the aid of the United States. Few Frenchmen joined him, most respecting Pétain’s legal leadership of the French State.

Yet by his stubbornness and irascibility, “Charles the Landless” managed to eventually be recognized as France’s leader and his nation was considered a “victor” among the Allies: The colonial empire was safeguarded (but only partially in Indochina), occupation zones in Germany were secured, and France was recognized as a leading member of the United Nations with a diplomatically important permanent seat and veto at the Security Council.

In the liberal-communist postwar order – founded on a kind of civil religion of anti-fascism and egalitarianism – France was thus in a better position than that entitled to the French State of Vichy, that of a neutral (semi-)occupied country and a moderately anti-Semitic conservative dictatorship. France’s “honor” was saved.

Yet the cost of De Gaulle’s victory however was exorbitant. There was the terrible “Franco-French civil war” between the London French and the Resistance, and the French State of Vichy. This entailed bloodshed which we forget today, for lack of commemoration. It meant fratricidal Franco-French fighting and spilled blood at Dakar, in Syria, and in metropolitan France. It meant accepting Anglo-American aggression against France, such as the treacherous British bombing of the French fleet at Mers-el-Kébir killing 1,300 French sailors and the general Anglo-American bombing of France, which killed around 60,000 Frenchmen (which appears to be somewhat more than the number of French gentiles killed by the German occupier, mostly in the struggle against the Resistance).[1]

More traumatic still however was making France conform to the egalitarian and anti-fascist civil religion, which over time would acquire increasingly Judeocentric overtones. Put simply, the Second World War was also a kind of religious-ideological war, in which all those who thought or acted outside certain ideological bounds would be persecuted and eliminated as heretics (and that is why the Western Allies’ claims of defending “free speech” rang hollow concerning Right-wing thinkers and politicians, for rights were not the matter, but civil religion, and no truly believed religion can tolerate heretics). De Gaulle’s pretense of representing “free France” among the Allies required condemning the entire ruling class of the French State not merely as misguided politicians in a supremely difficult geopolitical and historical context, but simply as traitors.

Thus were men jailed, dishonored, or even executed for their political beliefs and actions: Marshal Philippe Pétain was jailed for life for having headed the French State itself in these difficult times. Prime Minister Pierre Laval was executed for preferring Hitler to Stalin (his death had a great cathartic symbolism, his execution in a sense also symbolically killed all of French society’s “Collaboration”). Admiral François Darlan was assassinated for his opportunistic Realpolitik, cozying up first with the Germans and then the Allies. And Charles Maurras, the great reactionary intellectual, was jailed for life on grounds of his Judeophobic beliefs (not being saved by his similarly Germanophobic ones).

Most unjust was perhaps the jailing and miserable death in prison of General Henri Dentz, guilty of no more than doing his duty as a French officer in defending Syria from Anglo-Gaullist attack in 1941. Most ambiguous and tragic is perhaps the case of Joseph Darnand, a hero of the First World War and Germanophobe, he served the French State at the head of the Milice, an unarmed paramilitary group charged with maintaining order. Victim of attack from the Resistance, he sought to join it repeatedly, but being rejected, joined the Waffen-SS and was executed after the war. De Gaulle is reported to have said at the time: “Tell Darnand that I must have him executed for reasons of state, but that, soldier to soldier, he still has all my respect.”[2]

Then there was the wider [4]Épuration [4], with perhaps 40,000 Frenchmen being extra-judicially executed and 50,000 dishonored and banned from their profession. Many of the greatest writers of that generation were thus persecuted and ostracized, including Céline [5], Lucien Rebatet, and Abel Bonnard.

All these punishments and persecutions were justified by reason of state, given France’s submission to the liberal-communist new order. In private, De Gaulle could be more nuanced, according to the testimony of General Pierre Billotte, his chief of staff. He conceded that those arguing for alliance with Germany could also be French patriots, working for France to have the best possible place in Hitler’s New Order. Billotte reports that De Gaulle told him in autumn 1941, during the stunning early successes of Operation Barbarossa: “If the Germans win, it will have been Pétain, Laval, and Déat who will have been right, and I will have undermined France.”[3] In 1942, he even added that if anything Vichy’s policies were too moderate to receive Hitler’s favor: “Only two policies are possible: That of Free France and that of [Marcel] Déat [founding a French Waffen-SS division to fight on the Eastern front]. Vichy is senseless.”[4]

Postwar France was thus, under the Fourth Republic, handed back over to the politicians (who themselves had often gone from opportunistically supporting Jewish organizations before the war to supporting the anti-Semitic French State during the war, but all that was forgotten . . .). The cultural and ideological sphere, of supreme importance, was violently purged of Right-wing thinkers and effectively placed under liberal-communist hegemony. Two thinkers are most representative of that era: The Marxoid opportunist Jean-Paul Sartre and the Jewish liberal-conservative Raymond Aron. De Gaulle thus safeguarded the French state and empire, but had her rest on the most unsound and unstable social and cultural foundations.

1. Also noteworthy is that an estimated 3,500 French women were raped by Anglo-American forces during the Liberation. I have seen no evidence of comparable sexual misconduct by German forces in France during the war.