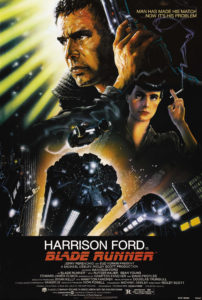 [1]Blade Runner opened in movie theaters in the summer of 1982 just two weeks after Steven Spielberg’s more heralded E.T., which went on to become the all-time box office moneymaker. Blade Runner, with a $27.5 million budget, took in $27 million at the box office on its first run—hardly a smash—yet it proved its worth in the long run. Almost every science fiction film made since 1982 has been influenced by its production design, photography, and special effects. A new generation of fans has materialized and the film has spawned dozens of Websites on the Internet.

All well and good, but what is it about Blade Runner that should attract the attention of Instaurationists? I doubt that the film’s enthusiasts are a potential hotbed of new subscribers to the magazine. The connection is that the world of the future portrayed in the film is very close to the dystopian predictions made in this publication.

In Los Angeles, the film has become a cultural touchstone, as the film takes place in that city in the year 2019. When Angelenos speak of a “Blade Runner scenario,” they aren’t referring to the film’s original screenplay. Rather, they mean the reality of life in Los Angeles is getting closer and closer to the dark vision of the film. And an integral part of that vision is the reality of white decline—in more colorful language, “a demotic polyglotism ominous with unresolved hostilities.”[1]

Ridley Scott’s film, Blade Runner, which appeared in 1982 . . . almost ten years later, remained so resonant that it had become a part of everyday speech in Los Angeles. All someone had to do was mention it, and you immediately knew where they stood about the future of the city.[2]

The film is based on Do Androids Dream of Electric Sheep?, a 1968 novel by science fiction writer Philip K. Dick. The racial angle of the film is absent from the book, which involves a fallout-ridden, post-nuclear-war world where wildlife has vanished and most humans are sterile. The fertile few are eligible to participate in a space colonization program. All colonists are awarded an android to perform slave labor in the “off-world.” The androids are virtually indistinguishable from humans but they have very short lifespans. As long as they perform their appointed tasks, there is no problem. But rogue androids must be “retired.” This is the job of Rick Deckard (Harrison Ford)—android hunter—or a blade runner, as the movie dubs him.

The mise-en-scène shifts the locale from San Francisco and Seattle to Los Angeles, which ushers in the Raymond Chandler 1940s undertones which are not in the book.

Chandler’s famed mystery novels are inextricably connected to Los Angeles—more specifically, the dark side of the palmy, sun-drenched metropolis. This is important because as late as 1976, Chandler biographer Frank MacShane could assert, “Los Angeles is the largest American city that is predominantly Protestant.”[3] Indeed, its WASPy ethos was frequently remarked about by a number of writers. Joan Didion called it ‘‘The West Coast of Iowa.” H. L. Mencken called it “Double-Dubuque.”

Though founded in 1781, Los Angeles remained a backwater until the 20th century, when old stock Americans poured out of the Midwest and settled in the Los Angeles basin. After World War II, hordes of defense plant workers and servicemen, who had been stationed in Southern California, decided to put down roots. Sure, there had long been Japanese, Chinese, blacks and Mexicans—but in modest numbers. As a result, Los Angeles was 80% white in 1960—an enviable status and one that seems almost unbelievable today. By 1980 the city was only 40% white. In 1984, it was estimated that at least 85 languages were spoken by children in the L.A. School District (38 spoken at Hollywood High School alone) and 120,000 students were placed in the category of “limited English proficiency.”[4] It goes without saying that the culture wars have not abated since then.

In Blade Runner, however, it appears that the culture wars are over and the Asians have won. This scenario might have seemed pretty far-fetched in 1982, but not so in 1997, as the global pundits now regularly ponder the fate of Hong Kong, the “emerging economies” of Asia, and the 1.2 billion people (i.e., the world’s largest market) in China.

Asian influence is dominant in Blade Runner, as the Los Angeles cityscape in 2019 is a hodgepodge of neon pictographs, and Asians on bicycles are ubiquitous. The presence of Mayan-like pyramids in the skyline indicates a strong Mexican influence. Forget about English, forget about bilingualism. “Cityspeak,” described as “a mishmash of Japanese, Spanish, German, what have you,” is the language of a Latino cop played by Edward James Olmos, whose flashy clothing is perhaps a nod to the infamous zoot suits worn by Mexicans during the World War II years, when they frequently clashed with servicemen. Curiously in the Los Angeles of the future, Negroes are conspicuous by their total absence—no explanation offered! Most telling of all, blimp-like vehicles sport video advertisements for off-world immigration, “The chance to begin again in a golden land of opportunity and adventure,” which sounds like the sort of boosterism that characterized Southern California in its salad days.

Los Angeles in Blade Runner has little in common with the popular image of the metropolis—no more glitz or glamor. Imagine a petrochemical hell, such as you might see in South Philadelphia, around the Newark Airport, or along vast spans of the Texas Gulf Coast, and you will be close to the Los Angeles of the film. Palm trees are nowhere in evidence. The city’s famed sunshine is blotted out by haze, smog, and rainfall. The “look” of the film can largely be attributed to one Syd Mead, who is given the unusual credit of “Visual Futurist.” The dark vision of Raymond Chandler has become literal:

If you mention Blade Runner here, you are greeted with a smirk. . . . Here the film is seen as darkly prescient of the downside of buzz words like “diversity” and “multiculturalism.” The problem of white flight in Southern California is exactly like Blade Runner. They aren’t moving off-planet, but to Washington or Oregon or Arizona. . . . What I keep hearing is, “It’s getting to be Blade Runner out there.” The bottom line is, with the crime and riots and the dramatic shift in the city’s ethnic balance, the feeling is, “It ain’t science fiction anymore. It’s reality.”[5]

In an Internet essay titled “The Future of Our Discontents,” William Timberman remarks:

For anyone who continues to harbor doubts about the future of American empire, there is something deeply unsettling about the rain-soaked Los Angeles in which Blade Runner is set, something eerily familiar in its crumbling architecture and punked-out Third World inhabitants. I wonder how many people, picking their way through theater parking lots on a warm June evening in 1982, imagined for a moment that they heard thunder in the air behind them, or looked apprehensively for oriental characters on the exit signs as they started their cars and drove away.

Though overtly anti-racist (“skin job” is a racial slur of sorts directed against androids), the film has a covert pro-white theme that does not strike the viewer until the third or fourth viewing—though I’m sure that director Ridley Scott and screenwriters Hampton Fancher and David Peeples would strenuously deny that such was their intent. Blade Runner is not apt to mobilize picket lines à la Birth of a Nation, but pro-white sentiments, albeit subtle, cannot be denied.

One can’t help but notice that the androids or replicants are all Nordic. One is a bit dorky, but the others are highly attractive. In particular the group’s leader, Rutger Hauer, looks like one of those blond beasts Jews always like to cast as evil Nazis in World War II movies. The implication is that white people emigrating off-planet want their own kind as replicant servants. In real life, white folks hire browns and blacks to perform domestic duties and stoop labor because they work cheap and there’s plenty of them. But suppose you could choose the race of your replicant slave? You’d probably pick the best-looking white model available—exactly what replicant hunter Deckard does! At the end of the film, when he heads for the hills with the radiant replicant named Rachel, it is almost like a return to the Garden of Eden. Like many a contemporary Angeleno, he has abandoned the diabolical City of Angels for a clean, green, prelapsarian environment that looks like the Pacific Northwest. Rachel’s manufacturer[6] says she is “special.” But is she special enough to bear children, to be the new white Eve for Rick Deckard, the new white Adam?

While we wax fundamental, we should also mention the film’s underlying theme: What does it mean to be human? The question is inevitable when human beings are confronted with man-made creatures that are virtually indistinguishable from their own kind. The question, though never specifically verbalized, runs throughout the movie. Ironically it is the replicant leader whose hunger for life at the end of his abbreviated span (“the light that burns twice as brightly burns half as long”) stands in contrast to the soulless, robot-like Asian hordes in the streets. The message is that even a white replicant is more “human” than a nonwhite. In the world of the future, why are all replicants, as far as we can tell, produced from a Northern European template? Is it a realization that people of color are a dime a dozen—if not worthless, at least worth less? Are white people more precious—and therefore more marketable as replicants? We may posit that a corollary theme of the movie is: What does it mean to be white? Spiritually? Emotionally? Intellectually? Romantically? Every which way?

In a homogeneous society, the question need never be asked. In a white majority society with significant numbers of minorities, the question arises and is asked more frequently as the numbers (and types) of minorities mount. Note the tentative attempts at white studies courses in college curricula. Compare and contrast—everyone’s favorite theme topic—must inevitably be applied to races in a multiracial society. The color-blind society is truly a piece of science fiction.

With a nod to Madison Grant, let us hope we don’t have to wait for the passing of the great race, as happens in the elegiac Blade Runner, before we finally have an answer to the question of what it means to be white.

6. The Tyrell Corporation is the name of the manufacturer in the film. In the book it is the Rosen Corporation. Make of this change of nomenclature what you will.