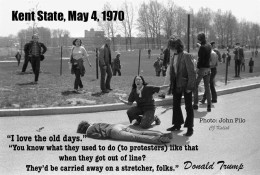 Argument: A while back Greg Johnson made an interesting comment — that he wants to make maintenance of Israel as difficult and costly for Jews as possible, since the more effort and resources they expend on that, the less they will have to attack White interests.

One can say the same for the System as a whole, the more effort and resources the System requires to prop up a decaying and disrupted multicultural regime, the less they will have to target those who pursue pro-White policies. Therefore, what we need is to stretch and exhaust the System as much as possible, ensure that they have no peace, promote constant chaos and turmoil, so the System is always on the defensive, always trying to stem the tide and prevent collapse into anarchy. A weakened System, desperate for survival, opens up many possibilities and opens up niches for nationalist expansion.

Counter-argument: The System will respond by repressing Whites even more, to our detriment (“worse is better” being mostly fiction; worse is most often just worse).

Response: That depends on what form the System’s problems take. If the problem is mass mobilization of angry White masses, catalyzed by Trump and subsequently amplified by “movement” activism, the System may perceive that the best course of action is less repression coupled to attempts at reform, similar to what Gorbachev tried in the USSR. It depends on us — if we get the White anger growing, then that will be the problem the System needs to calm down; if we sit back and do nothing, and let the Coloreds and SJWs rant and rave and have the stage to themselves, then the System will feel it has to placate them and not us. Counter-argument: Reform by the System will be a safety valve, dissolving White anger, making our desired change more difficult (again, the “worse is better” argument).

Response: This I think misunderstands the fundamental nature of most revolutions in history. I remember something I read in a book by Soviet defector “Viktor Suvorov” [3] — typically, successful revolutions do not occur during the time of greatest repression, but when that repression is suddenly relaxed. Examples in history abound, the French and Bolshevik revolutions being prime examples. The fall of communism being of more recent vintage, and for “movement” onanists, the case of Saint Adolf is instructive, the Nazis coming to power after an attempt to co-opt them by hopeful conservatives.

One may debate and discuss the mechanisms for this rule of history, including that when repression is relaxed, all of the pent-up anger and fury and revolutionary energy now has sufficient strength to burst through, and the ruling System has exposed its weakness which makes the revolutionaries “smell blood.” In contrast, during the greatest repression, the victims of the repression are stupefied by the terror inflicted on them, the System exerts an aura of invincible brutal strength, and the apparatus of state control is too powerful to overcome.

Counter-argument: The System knows this rule of history and will guard against it.

Response: I’m sure the Soviets knew this rule as well, as “Suvorov” demonstrates. But, a given System may have no choice. They may be in a situation in which continued repression is not possible, reforms are absolutely required to survive, and they may hope that the reforms will be sufficient to extend their rule and hold off revolution. In all of the historical cases outlined above, the ruling elites were in danger, and had to take the chance on reform. It follows then that it is imperative that the current System be given no choice — either attempts are made at reform to ease the rage and anxiety of the White masses or the whole multicultural regime will fall to pieces. But that is not going to happen on its own. Trump has been the catalyst to start the reaction, but unless someone steps in to extend and amplify this reaction it will fizzle out, wasting more time, and making us wait even longer for another opportunity, which would occur under even less favorable demographic circumstances. The fire has been lit; we need to pour gasoline on it.

Thus, it is imperative that the “movement” gets to work, sowing the seeds of distrust, rage, discord, alienation, bitterness, cynicism, and righteous anger among the White masses who have been at least partially aroused from their slumber by Trump and, to an even greater extent, by the unhinged System response to Trump’s rather mild and centrist challenge (the System’s reaction to Trump is more damaging to them than Trump is himself, it is like an immune system run amok — this should give us encouragement that the System will become desperate enough at some point to try reform if we keep the pressure up on them).

What could a real, effective, far-seeing movement, reasonably proofed against infiltrators and traitors, do in the current situation (beside the usual tactic of online posts and promoting overt racialist memes)? Three possibilities:

1. Send representatives to be at attendance at Trump rallies and other events throughout the country. The key point here is that these activists would, for the most part, notbe there as overt racialists, representing groups, and proselytizing with usual nonsense. No, instead, these people should be there blending into the crowd, undercover so to speak,spreading poisonous memes to undermine the System, sowing distrust and bitterness, exploiting the anger and resentment of Trump’s supporters, attacking the legitimacy of the System with clever maliciousness, utilizing rhetoric that is restrained yet at the same time craftily designed to enrage, inflame, and infuriate.

For example, Hood’s various “waking up from the American Dream” essays are excellent sources of material for “whispering in the ears” of Trump supporters, who are, no doubt, properly receptive to such messages. Now, yes, there can be a few overt racialists recruiting and making their presence known, but the majority should be there covertly planting the seeds so to speak, preparing the ground, “softening the crowd up” so that if and when they later hear more hardcore overt messages they’ll be accepting of them. Even more generally, the point is to spread cynicism, division, discord, rage, anger, resentment, bitterness, to emphasize how they are against Trump and how they want to thwart the will of the people, and how they are ruining America. And if anti-Trump protesters start their song-and-dance, that’s just more grist for the mill, more examples to point to about how they hate us. Discord and division, chaos and balkanization, undermining all confidence that the American System represents the interests of Trump’s supporters.

First, the aim is to instill an attitude of defiant anger, not one of despairing surrender. The people need to be made aware of their humiliated subaltern status, but in a manner that triggers righteous rage, not cowering cowardice.

Second, so there is no confusion or misinterpretation, the aim is not to provoke violence (although everyone has the right to self-defense if attacked), but to promote the attitude of “we are all too different, America is a joke, the System is corrupt, it’s time to look after our people alone,” and utterly oppose the idea of “despite our differences, we are all Americans.” Divide, divide, divide! When “Americans” of different races, creeds, and colors view each other with suspicion and hostility, with seething hatred, then we are on the road to recovery. That is your aim, that is your objective.

2. Activists with no overt connection to racialist politics can join the Trump campaign, even if just locally, and do everything possible to nudge it further in the direction of confrontational right-wing populism. Inflame the opposition, whose histrionic excesses will play right into the hands of those activists pursuing possibility #1.

3. Younger activists with no plausible connections to any previous political activity on the Right can indulge in some “black ops” infiltration of the opposition. Join in the local Clinton or Sanders campaign groups and nudge them in the direction of more overt and confrontational anti-Whiteness. Promote outrageous displays of hostility toward Whites and the traditional America, to better demonstrate to Trump’s supporters how much the System hates them. One could in theory have infiltrated the campaigns of Trump’s GOP opponents, to encourage outrageous cuckservatism anti-Whiteness among them as well. Use your imagination!

Again, similar to #1, the aim of #2 and #3 is memetic confrontation, not to provoke violence. Indeed, the groups in question, particularly the anti-Trump crowd, are already violent. There’s nothing to provoke there.

It is of course possible that activists are already doing these things and are just properly keeping quiet about it. If this is so, and I hope it is, that’s great and would show there is some hope for the “movement” yet.

To quote Yeats, what we should promote for the System is for them to cry in despair: “Things fall apart; the center cannot hold.”

To the ramparts, activists, memetically speaking, at least. You say you want a revolution? Work for it.