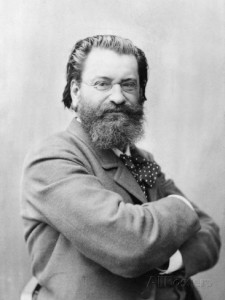 It is a standard canard to describe critics of Jewish power, privilege, and ethnocentrism (otherwise known as “racism”) as somehow psychopathological. One term that is often used is “obsessive.” Of course, Jews tend to be far more interested in themselves than their critics are, but this self-regard is never stigmatized as “obsessive.” But still, there is no point in denying that some anti-Semites are as obsessive, monomaniacal, and self-defeating as Captain Ahab.

The best Judeocritics do, however, have a very healthy trait that can be described as obsessiveness, although I prefer to describe it as scrupulousness and fair-mindedness. Such writers do not want to be unfair, vulgar “anti-Semites” picking on a small, hapless minority out of (as the Jews tell us) envy or various psycho-sexual complexes.

The most influential anti-Semite in human history, Adolf Hitler, himself professes in his famous book to have been deeply conflicted for months at a time. Anti-Semitism had to be absolutely factual, legitimate, and grounded, or would be a terrible crime: “The whole thing seemed to me so monstrous, the accusations so boundless, that, tormented by the fear of doing injustice, I again became anxious and uncertain.”[1] The critic then wishes to show, in good faith, with meticulous detail, and as definitively as possible, that his grievances are legitimate. The trouble is this very goyishe attitude itself only really works when one is discussing with people of good faith. “One false theory will falsify a hundred facts,” G. K. Chesterton is supposed to have said (I cannot confirm it). In any case, it takes infinitely less energy to tell an (unfalsifiable) lie than to prove a truth. That is the fundamental truth underlying the prosperous political economy of Talmudism and its secular offshoots, most notably liberal Zionism (in brief: “Ethno-state for me, multiculturalism for thee”).

But the good goyim, in their irrepressible goyish-ness, are stubborn indeed. They insist on enmeshing themselves in the tangled web of lies, truths, and half-truths put before them. The struggle to tear these apart progressively drives the goy mad. Indeed, all his efforts can simply be countered by the simple assertion of another lie. An uncontrollable rage rises in his soul (what evolutionary psychologists call the “cheater-detection mechanism”[2]).

The great Protestant reformer Martin Luther wrote in his inimitably-titled book On the Jews and Their Lies: “If I had to refute all the other articles of the Jewish faith, I should be obliged to write against them as much and for as long a time as they have used for inventing their lies — that is, longer than two thousand years.”[3]

The two volumes of Édouard Drumont’s La France juive, a best-seller in its day and long the reference anti-Semitic work, runs to 1,200 pages. Unfortunately, I have not been able to read La France Juive to examine its merits as the Jews of the so-called “League Against Anti-Semitism and Racism” (LICRA) have succeeded in suing to ban the book, which had recently been republished by Alain Soral. This was an astonishing, absurd, and rare decision by a French court to censor . . . a century-old historical document. Were Drumont alive today, no doubt he would note that this remarkable decision precisely reflects the power of the ethnic networks he denounced and proves that the Jews fear his big book is of such quality that it would enlighten the goyim and make them restless.

After Mein Kampf, Hitler for a time planned for a second book dedicated entirely to the history of the Jews. Even during the war, in October 1941 during a most critical phase of the invasion of Russia, the German Führer assured listeners that he had not ceased to document his grievances: “I have numerous accounts to settle, about which I cannot think today. But that doesn’t mean I forget them. I write them down. The time will come to bring out the big book!”[4] We will never read Hitler’s memoirs. [4]Professor Kevin MacDonald’s four weighty volumes on the Jewish question are models of scholarly seriousness and meticulous documentation. In visibly good faith, the venerable Anglo-American tradition of scientific empiricism – in its characteristically dry and objective language, armed with endless quotes, statistics, and scientific studies – is brought to bear on the world’s most privileged, and indeed unmentionable, ethnic group. And MacDonald continues to sacrifice himself, soldiering on to study and write about the most disagreeable subject of Jewish ethnocentrism, to document every double-standard and every bit of false propaganda. We reap the benefits.  In our disenchanted age, only science retains the prestige to convince people of an unambiguous “truth.”

For how long must the good goyim struggle in this disagreeable business? Forever? At least until the entire rotten structure of lies and hypocrisy is brought tumbling down and the European peoples, and in particular European-Americans, are, again, free to determine their own destiny.

There are dangers in becoming obsessive. Every topic must be given the just measure of attention. The work must go on.

1. Adolf Hitler (trans. Ralph Manheim), Mein Kampf (London: Hutchison, 1969), 52. Hitler’s general account of his “greatest inner struggles” in awakening to anti-Semitism and his account of Jewish power are remarkable, and one can see why little attention has been given to them in popular culture and the media.

2. This mechanism, we are told, was evolved among hunter-gatherer tribes to facilitate survival. Given the peculiar conditions of the Ice Age, I suspect this mechanism has a peculiar form among northwest Europeans, making them rather trusting in general but perhaps uniquely ruthless when the mechanism is triggered.