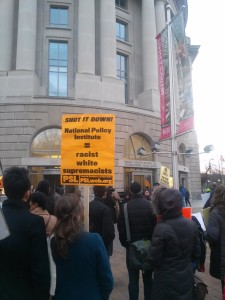 On Saturday, March 5th the National Policy Institute held its evening conference, Identity Politics, in the Rotunda room of the Ronald Reagan Building in Washington, D.C. The Rotunda is a large circular room with a domed ceiling over eight meters high and a capacity of more than two hundred people. Along its northeast edge runs an outdoor balcony looking down on the corner of 13th Street and Pennsylvania Avenue, three blocks from the White House. Throughout the evening, conference attendees would go out on the balcony for a smoke or a breath of fresh air. From this high place they could hear the sounds of protesters chanting on the street, eight floors below.

One eyewitness reported that a few dozen protesters had shown up, which may be the largest number to ever protest an NPI event. However, security was tight and it was not difficult to evade the protesters, who, by all accounts, were looking to expose the identities of those attending the conference. Access was limited to two well-guarded elevators leading to the Rotunda room and only those with tickets were allowed to use the elevators. Entering through a side entrance, or through the parking garage below the building, allowed many to bypass potential threats to their personal safety.

If anything, the number of protesters and the sound of their desperate screams rising from the streets below only added to the energy of the conference. Perhaps this is because of the irony that on this night true dissidents of the anti-white system were “occupying” a luxurious space in the heart of a hostile regime, while the “so brave” enforcers of the regime were helpless to stop us. There was a distinct sense that we are winning and that our enemies are afraid, and no one could deny that Donald Trump is the cause of this panic. Trump has created a momentum that works in our favor and exposes how thin the veneer of control is over our people. The purpose of this conference seemed to be to acknowledge Trump’s role, while also looking realistically at the future of white racial identity politics and the Alt-Right in general.

Looking around the Rotunda and seeing that over ninety percent of the attendees were dressed in stylish formal attire, one could not help but feel that this was a gathering of secret agents in our movement; the James Bonds in service of a new order, the Jason Bournes awakening and becoming red-pilled to the nightmare reality of a system that exploits us, using us to our own detriment and to the detriment of the world. It’s not prudent to list names, but there were many familiar faces, including well-known bloggers, Twitter celebrities, several Counter-Currents writers, and numerous activists. Additionally, there were many new faces, people coming to a conference like this for the first time. Most of the new people I spoke to belonged to the “TRS faction” of White Nationalism.

For the first hour or so, attendees mingled and introduced themselves. A buffet of food was available (some kind of meat and potatoes, and little pizzas with various toppings), and there was a cash bar. The celebratory mood was infectious. There was almost a sense of disappointment when people were asked to settle in and to direct their attention to the podium so that the speeches could begin. Every seat was filled, and many people stood in a large semi-circle in the aisle along back edge of the circular room. The program had an informal feel as people were free to get up and get more food or drink throughout the evening.

Kevin MacDonald gave the second speech, which was all about Trump and why he has emerged at the front-runner among Republican candidates. Dr. MacDonald talked about how the Republican Party has failed to address the demographic needs of its core constituency, white Americans, while at the same time, the Party devotes much of its efforts to serving the demographic needs of Israel. Trump has emerged not only as a figure with celebrity appeal, but as a man who is seemingly impervious to the slur of racism his opponents attempt to label him with. As a result, he has emboldened many white Americans to at least stand up for themselves in regards to illegal immigration.

Dr. MacDonald spoke in the most explicitly racial terms of anyone at the conference. Had the press stuck around a bit longer, they might have gotten a juicier clip from his speech. One wonders what the staff servicing the conference thought about the things he said. Nearly all of the servers were non-white, either black or Hispanic, a trend that has been constant at every NPI event. For the most part, the second presentation was standard fare for anyone who has read web sites like VDare.com or American Renaissance.

Richard Spencer was the final speaker of the evening and his talk also concerned Donald Trump. First he explained why Trump is in many ways the perfect Alt-Right response to the Republican establishment. He is so rich that he can’t be bought. He has populist appeal among the masses. He embodies some but not all of the values the Alt-Right cares about. He is living proof that it is possible through the sheer will of personality to buck the system.

At the same time, Mr. Spencer cautioned that our movement should still distance itself from Trump. It is unwise to assert that he is secretly one of us, or that his goals are the same as our goals. Fantasies of “Der Trumpenfuhrer” aside, White Nationalists must accept that even if Trump were to become president, it would not be a victory for our cause. At best it will only buy us some time. We must remain vigilant and prepare for what we must do after Trump, whether or not he wins or loses.

During the question and answer time after the speeches were finished, one questioner asked what we should do if Trump doesn’t win. Richard Spencer answered the question by saying that, in a sense, Trump has already won. While this answer might not have provided the practical details that the questioner was looking for, it does hint at a plan. We can look at how Trump has succeeded thus far and try to emulate his winning qualities. While Trump may not be one of us, there may be some among us who can follow his examples. In another sense, what Trump has accomplished is to shift the national mood towards our direction, and this opens new opportunities for us to recruit the best among our people to the cause of white sovereignty.

As the evening reached its end, most of the conference attendees stayed as late as possible, saying good-byes, exchanging contact information, and even gathering together for group photos, something hitherto unseen before at this type of event. It seemed clear that the gathering could have lasted all night if it had been allowed. While the speeches were all excellent, it was the fellowship that really made the event worthwhile. As it was, the staff at the Ronald Reagan Building was gracious enough to allow us to stay until a little after 11 o’clock before asking us to leave.

Overall, this conference was another great success for the National Policy Institute and many were vowing to return to the next one. Video or audio of the presentations will no doubt soon be made available by NPI for those who were unable to attend, but it is clear that those in our movement are eager for more real-life interactions and there is great demand for more opportunities to meet in person. If we build it they will come.