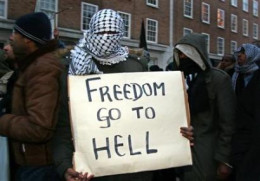 Following the mass murders in Paris and Brussels, we hear many political leaders saying that “our European values” and “our Western way of life” were attacked. The conflict between an Islamist in a suicide belt and a Western concert-goer or a tourist in the airport is thus value-based. As if out of thin air, something irreconcilable has emerged between those two people of different cultural backgrounds.

So what are these “European values”?

The West has become a global consumer society. Our mosque is a supermarket. Instead of 72 virgins, the European paradise consists of a pension fund and many years of retirement in a villa on the Mediterranean. This is the last man of Nietzsche, bored of adventure, disdaining of struggle, and moved only by his appetite for comfort and security.

The values of this offspring of consumer society are defined by love of comfort. Through “human rights,” “tolerance,” and “liberal democracy” he attempts to build a conflict-free ideal world of eternal peace and equality where every impulse that pushes us to self-sacrifice is suppressed in the human soul. He never admits that during the last half century, most of the violence on the planet has been created precisely by Western attempts to impose this outlook on other cultures, including Islamic countries.

For him, the European identity is a collection of those exact same hollow-sounding values. Any existential dimension has been erased from his identity, because the idea that one is born into an ethnicity, sex, or race fills him with horror. European values demand that door must be open for everyone. Every one of seven billion people is a potential European. This is why Ahto Lobjakas, an Estonian liberal pundit recently wrote: “Every Muslim of Paris – including the murderers – is an European more than a half-educated Estonian who dwells on the color of the skin or undigested Christianity.”

Trying to seed the fruits of a withering European civilization all over the world is at least just as foolish as trying to justify global conquest and the indiscriminate murder of people in the name of one God and the message of his prophet.

We must face the truth and realize what drives the contempt of a traditional Muslim for modern Western culture. There is no doubt that compared to liberal Europe, Islam carries stronger values and maintains a healthy impulse toward self-assertion. And this is how Western mass culture enables Islam to conquer Europe. When liberal, progressive, egalitarian, and pacifist Western people renounce resistance against the Islamic invasion, the party with the stronger will to power wins.

In the conflict with Islam, the very essence of liberalism leads to defeat. Liberalism demands ever faster immigration into Europe, which will transform a huge part of the West into the Third World. Culture is not bound to geographic location but to people. Immigrants bring their culture with them to Europe. And this inevitably leads to the destruction of all European values that promoted this invasion.

So is it still possible to protect Europe? Yes, but for that we must accept that we are protecting something more than our comfortable lifestyle. We must stop protecting liberal values from Islam, because they hold no water. It is not Islam but liberalism that is the greatest danger to the preservation of traditional, ethnically European nations and cultures, because what led to the opening of borders was the liberal dream of a global supermarket where all consumers are equal.

The true parties in this conflict are not different values but different peoples. The demographic crisis of Europe is deepened by any kind of non-European invasion, be the immigrants Muslims, Christians, or Hindus. It is also deepened by the Western lifestyle which places comfort and self-indulgence above having babies. For the European nations to survive, fighting this demographic crisis is the first priority.

Islam, being a world-conquering religion that claims access to an absolute truth, amplifies the aggressiveness of the immigrants and proves to more and more Europeans that multiculturalism is impossible. This in turn allows us to mobilize more Europeans against immigration. But the fight against immigration must not become a banal liberal anti-Islam movement, it must be a fight for European nations. Thus our true enemies are those who have enabled immigration and hence caused the terrorist attacks in Paris and Brussels.

The correct answer to terror cannot be redoubling the bombing raids in the Middle East, but replacing non-European immigration with emigration. Our culture and values have no place in the Islamic world, so enough of the export of democracy and human rights! And their culture has no place in Europe. We are too different to be separated by just a few housing blocks. We need national borders and the Mediterranean between us.

Sooner or later, this is bound to become self-evident enough for liberal European values to die their natural death. Our task is to ensure that liberalism dies at the hands of indigenous Europeans not Islamic invaders. For that we must rediscover the same traditional values that are maintained by Islam but suppressed by the liberalism in Europe. Those values will enable us to revive the nations of Europe and protect them against all foreign threats.

Once Islam is no longer a question of domestic but of foreign policy, Europeans can deal with it as history has shown. Since the 8th century, European warriors successfully defended their continent against Islam, halting invasions into the European heartland and recapturing Iberia and the Balkans step by step from Muslims. But even then, strategically speaking it will be useful not to see Islam as a single hostile force — as the anti-Islam movement would dictate — but to support secular and nationalist leaders in Islamic countries, such as Assad in Syria and Qaddafi in Libya.

Paradoxically the current wave of immigration might be the greatest chance to reawaken European national identities. The conflicts it has brought force us to choose our own side. In this ethnic conflict, the invaders do not see any difference between the Europeans who welcome them with posters and smiles and those who fear for the fate of their civilization. They see no difference between liberals or conservativies, Christians or Pagans. We all can become victims of the next bomb attack.

Understanding this helps us shake off the chains of consumerism and prepare for battle. Suddenly we discover that European culture is much more than a collection of liberal buzzwords. We can only become worthy opponents of Islamists who fight for their tradition and religion if we rediscover the rich heritage of Europe from Charles Martel to the incantations of Kalevala. This is the only European alternative to the crippling decadence of liberalism.

First published in Estonian at http://rahvahaal.delfi.ee/news/uudised/ruuben-kaalep-tuleb-vaadata-toele-nakku-ja-moista-mis-pohjustab-traditsioonilise-moslemi-polgust-tanapaeva-laane-kultuuri-vastu?id=74100805 [2]