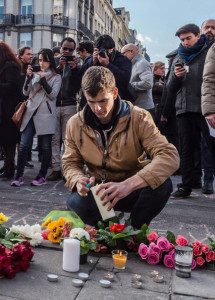 After the attacks on Charlie Hebdo last year I wrote about the puerile immaturity [2] of the response in some quarters. Later in the year, after the even more deadly attacks in Paris, I wrote about the empty sentimentality [3] of the response in some quarters. These two responses are in fact facets of the same mindset; a bipolar condition that simultaneously laughs and cries at our collective suicide whilst refusing to admit that anything is fundamentally wrong. It is an adolescent sensibility that combines impotent cynicism with ostentatious mawkishness.

Now, it might be objected that my condemnation of this contemporary European mind-set belongs to the same school of thought that seeks to blame the West for Muslim terrorism. The sort of viewpoint that argues that Paris, Brussels, London are all Karmic payback for Western intervention in the Middle East. That we are reaping what we have sown. The fundamental distinction that I want to draw between my own view and that of those who argue for such atrocities being an inevitable Nemesis is that my intention is to cure Europe back to health whereas theirs is to euthanize it to death. After the mass sex attacks in Cologne on New Year’s Eve, a German Interior Minister, Ralf Jaeger said [4], “What happens on the right-wing platforms and in chatrooms is at least as awful as the acts of those assaulting the women.” In an unpleasant echo of this sentiment, Simon Jenkins in The Guardian declared that, “The scariest thing about Brussels is our reaction to it [5].” These points of view are predicated on the belief that the one thing that must never be allowed to happen is that European countries regain a sense of national identity. My point of view is that such a regaining of national identity is the first thing that must happen. I criticise Europe for being too weak, they criticize Europe for not being weak enough.

A few weeks ago, Pope Francis condemned [6] Donald Trump’s plan to build a wall along the Mexican border. “A person who thinks only about building walls, wherever they may be, and not building bridges, is not Christian. This is not the gospel,” declared the Pontiff. Pope Francis is right about one thing: the present choice we face is about walls and bridges. There is a dominant view shared by most of the political classes of Europe that borders should be broken down more and more so that ultimately there will be no national distinctions whatsoever. They see this as a sort of utopia because they imagine that the erasure of distinctions will result in a pacifist levelling of all humanity and that the lion shall lie down with the lamb. The more we see of Muslim immigration the more preposterous this scenario seems but that will have little effect on those who are ideologically required to believe in a teleology of peace.