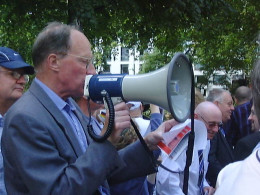 Richard Edmonds delivered this speech at a demonstration on February 27, 2016 opposite the German Embassy in London, in defense of the National Democratic Party (NPD). The title is editorial.

Our demonstration here before the German Embassy in the centre of London, is show solitary with our German comrades of the NPD whose party the tyrannical German authorities are wishing to close down. We are also here to oppose the on-going mass-Immigration-Invasion of Europe by millions of Third Worlders.

Here’s the question: whose idea is it? Whose plan was it? To flood Europe, to flood Germany, to flood Britain with millions of foreigners? The plan is called the Morgenthau plan. Henry Morgenthau was a leading American politician during the Second World War. Morgenthau was a top advisor to U.S. President Franklin Delano Roosevelt and he was appointed Roosevelt’s Treasury Secretary; Morgenthau controlled the finances of the U.S. Government during the Second World War. Morgenthau’s plan was to destroy Germany and the German people by flooding the country with millions of foreigners in order to breed the Germans out. Morgenthau’s plan became the war-aim of the American government. Roosevelt told Morgenthau that he wanted the Germans castrated so that they could not breed. The New York Times publicly welcomed this plan to genocide the German people.

The genocidal Morgenthau plan has now been turned against all of us. Every European country has been flooded with millions of Third-Worlders to make us foreigners in our own countries. I repeat, Mohamet is now the top name for baby-boys across the whole of England and Wales. I remind you that at the time that NATO, the American military alliance, was attacking Yugoslavia and bombing Belgrade in the late 1990s, the top military commander of NATO, U.S. General Wesley Clark, stated that there was no place in modern Europe for ethnically pure states: this is the reaffirmation of the Morgenthau plan. When the German Chancellor, Angela Merkel, invites the whole world into Europe this is the genocidal Morgenthau in action.

In conclusion, let us stand by our German comrades of the NPD and let us stand in defense of our white Europe.

The powerful quote from the lips of US President Roosevelt that “he wanted the Germans castrated, so that they could not continue breed” comes from the diary of US Treasury Secretary, Henry Morgenthau, dated August 19, 1944. The quote and the source are to be found in David Irving’s book on the Allies’ Nuremberg Trial, Nuremberg: The Last Battle.