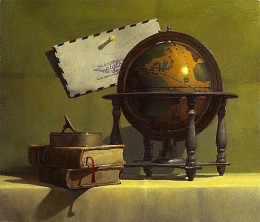 I would like to briefly make the case for universal nationalism, a political ideology defined here as the belief that every nation should have a society and a state of its own. Put more simply still: Every people should have its own country; every people should rule itself, rather than be dictated by outsiders. I believe universal nationalism encapsulates many of the principles which would allow all human beings to live in a more peaceful, prosperous, and progressive world.

I base this upon two premises:

Perhaps the most fundamental fact supporting the idea of universal nationalism is the reality of ethnocentrism. Human beings are inherently tribal and, with good reason, have evolved over hundreds of thousands if not millions of years to be so. In the modern era, with its mass communications and mass politics, this tribalism becomes fixated on the ethnic group. Whereas individuals in a society should all identify with each other as much as possible, as this is a prerequisite for the solidarity on which the public good always rests, we tend to find that identification fractures along ethnic lines.

This leads to a negative reason for universal nationalism: The multiculturalists’ persistent failure to create a truly cohesive and harmonious multiethnic society. It matters not whether the ethnic differences are based on language (Belgium, Canada), religion (Iraq, Syria), or race (the United States, Mexico, Brazil, South Africa . . .).[1] In each case, the lack of a common identity leads to a perpetual tribalization of politics. These problems are sometimes peaceful managed, but they quite often lead to horrific and otherwise unnecessary ethnic civil wars. In any case, the problems are intractable. People on average are simply not as willing to submit to authority, pay taxes, or give their life in war for another group, as they would for their own group. In a word: There is no solidarity.

This lack of solidarity tends to be worsened by the fact that ethnic groups tend to have different levels of educational and socio-economic performance. Ethnic pride is one of the most powerful emotions in the world, and the sight of another ethnic group doing better than one’s own inevitably leads to enormous amounts of ill-feeling. The less well-performing group will be underrepresented in the countries’ influential institutions and circles (e.g. politics, media, academia, law, corporations, the oligarchy . . .) and will tend to accuse of the better-performing group of ethnic nepotism or of biasing its use of power in its own interests, i.e. “racism.” Conversely, a better-performing ethnic group tends to resent the less well-performing ones for being a relative drag on society, committing more crimes and requiring more policing, dragging down school performance, providing less in taxes, and generally requiring more resources from the public purse in the form of welfare. These dynamics largely account for the endless conflicts and tensions between Jews, East Asians (e.g. Overseas Chinese), white gentiles, browns, and blacks whenever these groups inhabit the same countries.

Different ethnic groups also tend to have different preferences. Living in the same society and under the same government, each is not free to pursue them, but must accommodate ill-fitting common decisions, either decided unilaterally by one group or through awkward inter-ethnic compromises.

Mirroring the intractable problems of the multiethnic society, there are positive reasons for universal nationalism. In short, in the nation-state man’s tribal instinct no longer tears the society apart, but brings it together. Instead of ethnic fragmentation and conflict, ethnocentrism in the nation-state turns the entire society into one extended family. This tends to both be emotionally compelling – hence the power of political nationalism throughout the modern era[2] – and to enable societies in which individuals are more willing to sacrifice for the public good, whether in the form of respecting public authority and the law, paying taxes, or defending against foreign aggression. Perhaps unsurprisingly, the powerful “cuddle hormone” oxytocin tends to promote both altruism (self-sacrifice) and ethnocentrism (in-group identity and preference), which makes perfect evolutionary sense.[3]

The nation-state, like a family, is both a preexisting biological and cultural reality, and a project to be carefully cultivated over the generations. In the ideal nation-state, common national identification is developed through the elimination of sub-national particularisms, either by assimilation to a common ethnic group or by minorities’ gaining independence in their own nation-states.

In the modern era, the European nation-state was found to be such a powerful form of socio-political organization that it was emulated throughout the world. Belief in the desirability of the nation-state was sharply weakened by the excesses of the world wars. But the nation-state is only a tool, a powerful but double-edged sword, and cannot be blamed for being misused. In any event, a nation-state bien compris would recognize kinship with closely-related nations and logically organize to defend common interests. Even after the Second World War, the liberal-conservative Jewish intellectual Raymond Aron, for one, continued to consider the nation-state to be “the political masterpiece.” Few would argue that Europeans’ relative abandonment of the nation-state – such as the creation of African and Islamic ghettos in the cities or the building of a flawed currency union – have improved their well-being or influence in the world.

Finally, the domestic homogeneity of the nation-state is desirable because it is the only way of guaranteeing humanity’s international diversity. Human beings, contra an evil Judeo-Christian doctrine, are not separate from the animal kingdom and the rest of Nature, but an integral part of it. Humanity, like any species, is subject to the same Darwinian rules of natural selection and struggle. It may survive and prosper and achieve higher forms of consciousness, or it may go extinct. Perhaps the best guarantee to ensure humanity’s maximal survivability is diversity, true diversity. True human diversity would be biological, cultural, political, economic, and otherwise.

The globalists argue that all political regimes, across the world, that are different from their own “liberal-democratic” ideals should be destroyed and that all countries should be integrated into a single hyper-consumerist global capitalist economic system. Thus, the Earth is being consumed to fill our bellies, but she cannot sustain all Third World countries achieving Western standards of living, the rainforests being destroyed and hundreds of millions of years of accumulated fossil-fuels being consumed for our vulgar pleasures.

The globalists also argue that – at least concerning Western countries – that ethnic homogeneity should be destroyed, that America should be “globalized” into a raza cósmica and that Europe should be Afro-Islamized. They call this “diversity.” But the equation of ethnic heterogeneity with “diversity” is very misleading insofar as, actually – notwithstanding their genetic or linguistic differences, or an intractable tendency towards self-segregation and the formation of subcultures – different ethnic gorups in a given society must anyway must submit to a common political and ideological model to live together. Is the elimination of European ethnicities and identity, and the subjugation of the entire world to a single “liberal-democratic” ideology and capitalist economic system, really “diverse”?

I posit the contrary: Subjugating all of humanity to a single economic and ideological model means putting all our eggs in one basket. If it is seriously flawed, as it surely is or will occasionally be, that means we would all suffer from its failures and risk extinction.

Instead, humanity really should be biologically, culturally, politically, and economically diverse. Thus, with every new era, each society will evolve and react somewhat differently. While one may stagnate or even collapse, others may survive and prosper. The innovations of one part of humanity – the Japanese, say – can be adopted and adapted to other parts. Would the elimination of Japan’s uniqueness through Africanization or Islamization really benefit the rest of humanity, or even Africa and the Islamic World? Most would think not. And the same is true of Europe and Europeans. We can ask simply: Would, as is currently proposed, the decline and steady disappearance ethnic Europeans really benefit the Third World? Given the lack of innovation of Latin America, Africa, and the Islamic World, this seems hard to believe. And certainly, few would argue that Haiti or Zimbabwe have benefited much from white extinction in those countries.

I believe Europeans, like any group, should take their own side. But many of our people, partly due to their in-born generosity and partly due to a misleading education, are insensitive to arguments of self-interest. For them the good must be couched exclusively in universal terms. These people are disturbed by the growing inequality and social fragmentation evident throughout the Western world yet are powerless to understand why this happening or articulate a valid response. For them, I answer: Nationhood is a supreme moral good necessary to a solidary and harmonious society, and therefore all nations, particularly our dear European nations, should be preserved and cultivated.

1. The nearest thing I have found to an exception to this rule is Swizterland, a very successful country in which the diversity between Protestants and Catholics, and between German-, French-, Italian-, and Romansh-speakers appears to pose few problems. Scholars have proposed that one reason Switzerland is so peaceful is because these groups, while united in a fairly weak federal state (with central government spending of just 10% of GDP), are sharply separated in their own largely self-ruling cantons. One should also not neglect that Switzerland’s ethnic diversity has in fact led to tensions and conflict throughout its history and required very peculiar, in some respects stifling and fragile, political structures.  Véronique Greenwood, “Scientists Who Model Ethnic Violence Find that in Switzerland, Separate is Key to Peace,” Discover blog, October 12, 2011. http://blogs.discovermagazine.com/80beats/2011/10/12/scientists-who-model-ethnic-violence-find-that-in-switzerland-separation-is-key-to-peace/ [2]

2. Indeed, nationalism is probably the single-most-powerful and most-exploited political sentiment in modern history, including by political movements who might be theoretically opposed to it. For instance, the twentieth-century revolutionary Chinese and Vietnamese communist movements and the various “anti-racist” anti-colonial movements, were quite obviously motivated and empowered by ethnocentric sentiment against overbearing foreign powers.