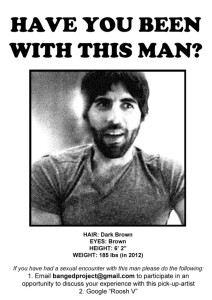 Roosh’s argument is basically to clutch his pearls and declare that he is shocked — shocked! — that the Alt Right is full of racist, illiberal meanies who would put limits on sexual freedom by prohibiting interracial sex and breeding:

The alt right has begun doing what they wanted to do all along: control the sexual choices of men. The following two conditions must now be met if you are to be accepted into their e-movement:

Roosh’s moral axiom here is that there should be no limits on sexual choices. (Although homosexuality is bad, because that provides him with a convenient ad hominem.) Roosh does, however, offer a novel version of pearl-clutching liberal indignation, for instead of arguing that proposing limits on sexual behavior makes White Nationalists “no better than Hitler,” he argues that we’re really no better than feminists:

The alt right has gone from a possible political alternative to a frustrated mob that wants to control the sexual choices of all men. With whom have we encountered that before?

One of the virtues of the “Alt Right” label is its vagueness, which allows people to signal dissent from the conservative mainstream without avowing anything too specific. Roosh is exploiting this ambiguity. But surely it is no news to him that the Alt Right is filled with people who are both racist and anti-liberal and who would gladly ban interracial sex and remove all non-whites from our homelands. Although I can’t speak for Roosh’s Alt Right defenders, Richard Spencer and RamZpaul, I would be quite surprised if they oppose putting any limits on interracial sexual relations either.

The purpose of White Nationalism is first to save our race from the looming threat of biological extinction and then to create healthy social orders in which our people can flourish. To do that, we need to create homogeneously white homelands, which by their very nature limit sexual choices to members of our own race. Beyond that, White Nationalists have to stand for the restoration of biologically based and traditionally hallowed sexual norms: heterosexual marriage, the nuclear family, the single-breadwinner household, men as protectors and providers, and women as wives and mothers. And beyond that, a well-ordered white society should recognize that every regime encourages either eugenic or dysgenic breeding patterns, thus we must institute eugenic incentives. [6]None of these measures are consistent with sexual liberalism, libertarianism, or libertinism. But we are not liberals. We believe that people today are miserable because they are free. Civilization is founded upon laws, including sexual norms. Therefore, there is nothing Right-wing at all about Roosh and his lost boys who whine like spoiled children at the very idea of putting limits on their sexual choices and behavior.

If this is what the manosphere stands for, then it is really no different from another social movement that seeks to maximize the same sort of infantile and immiserating freedom without responsibility, while undermining the foundations of civilization itself. I am speaking, of course, of feminism. The manosphere and feminism are cut from the same cloth. They only oppose each other like two rival tribes of barbarians fighting over the spoils of a fallen civilization. [7]The feminists, however, are right about Roosh. If a woman is too young, dumb, or drunk to have consented to sex, then she was raped. The fact that this is treated as debatable proves what an airless basement — what a cultish echo-chamber — Return of Kings really is. Either Roosh has admitted to raping a drunk woman in Iceland, or he is a fraud who passed off a rape story with a happy ending as fact. In either case, he can plausibly be branded a rape advocate, since he is in the business of advising young men how to get sex. Roosh has not refuted this argument. He has simply dodged, weaved, and waved his hairy palms.