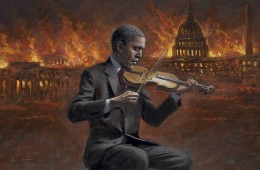 Counter-Currents Radio
Now in Audio Version
Why Conservatives Conserve Nothing Why do conservatives conserve nothing? Because to conserve anything, they have to win political power. Winning requires a conservative majority. Conservative voters tend to identify with their nation and its history, whereas Leftists tend to be alienated from it. In the United States and other white countries, it is natural that conservative voters are overwhelmingly white, whereas the Left tends to be a coalition of Jews, non-whites, and alienated whites (e.g., liberal ideologues, feminists, and sexual deviants).

As whites become minorities in our own homelands, it will be impossible for conservative politicians to win election. Therefore, it will be impossible to implement conservative policies. Therefore, the things that conservatives love will disappear. In the United States, that means limited constitutional government, fiscal responsibility, private enterprise, freedom of speech, freedom of religion, gun rights, etc. These values have tenuous enough footholds even in white countries and are almost non-existent in non-white countries.

In the short run, it might be possible for conservatives to hold onto power in certain localities and even to gain national office from time to time, due to unpredictable factors like wars, famines, scandals, and electoral whims. But in the long run, conservative policies will become politically impossible because the Left will have elected a new people with solidly Leftist preferences.

In short, conservatives will conserve nothing, because they will do nothing to preserve the white majorities needed to elect them.

At this point, conservatives will take another hit on the crack pipe of “minority outreach.” They’ll tell themselves that non-whites are “natural conservatives,” even though there is precious little constitutionally limited government, fiscal responsibility, or individual freedom south of the Rio Grande, in Africa, or anywhere else where non-whites are the majority. They’ll pander and cuck a little harder for the brown people. They’ll put forward more black and Hispanic affirmative action candidates (Cain, Carson, Cruz, Rubio). They’ll blubber and hope and pray that Jesus will miracle their asses into power for just once more election cycle. Anything, really, to avoid facing up to the slow, unrelenting countdown to white demographic Armageddon [11].

Of course white liberals are in the same boat. Both groups are aware that they are dying out. Neither group will lift a finger to stop the process. And when both groups contemplate the future of their values in a brown world, both of them pin everything on somehow converting their replacements, a kind of ideological transmigration from their enfeebled wraith-like bodies into the fecund, swarming colored masses. They never ask themselves why healthy races would want to adopt the values of a race that created the greatest political and economic orders in history, then consumed itself in self-indulgence, opened its borders, and gave everything away to peoples they should have held in contempt.

The only way for conservatives to conserve anything is first to conserve the white majority of natural conservatives. It can be done. White demographic decline is not a cosmic mystery. It is the predictable consequence of bad political decisions: affirmative action, feminism, desegregation, open borders, and economic globalization, for starters. It can be fixed by better decisions, starting with closing the borders; cutting illegal aliens off from employment, education, and social benefits; and then deporting the ones that do not self-deport [12].

Saving the white majority will be difficult. It becomes more difficult with each passing day. But it can be done, as I outline in my essay “The Slow Cleanse [13].” All we lack is political will. Why, then, are conservatives so opposed to doing the one thing that can save them and their values from long-term extinction? Why are they willing to gamble everything on the far more dubious and difficult path of converting a rising non-white majority to conservatism?

The answer is simple: Like a herd of elephants being stampeded off a cliff by a tiny mouse, conservatives are destroying themselves, their values, and their nations out of fear of a single word: “racism.” Under the present dispensation, it is regarded as perfectly moral for Jews, blacks, Asians, Hispanics — everyone, really, except whites — to think of themselves as ethnic groups and to fight for their group interests in the political realm. For whites, however, that would be the sin of racism. And conservatives are willing to sin quite a lot — to lie, to break oaths, to betray their constituencies and their nations — but they’d rather die than be racist. They’d rather us die too, a decision that our enemies applaud.

Whites are allowed to think of ourselves only as human beings with generic human interests that by definition cannot conflict with those of other human beings. We can benefit as a group only by benefiting all humanity. This is the basis of the desperate conservative attempt to convert blacks and browns to the virtues of constitutional government and free enterprise, as if these are a race-neutral, universal ideology rather than specifically European cultural practices, which cannot be transplanted everywhere on the globe and cannot be sustained in our own homelands once we are replaced by non-whites.

Of course, conservatives are not above making crass appeals to the ethnic interests of non-whites. It is only white ethnic interests that are taboo. As I put it in my article, “The Conscience of a Cuckservative [14]“:

By treating appeals to white ethnic interests as simply immoral, Republicans are . . . playing by rules dictated by the Democrats. And of course the Democrats have rigged the rules in their favor.

I used to think conservatives were unprincipled. But they are highly principled. The problem is that their principles are provided by their enemies, and if we act upon them, we will be destroyed.

In America, however, the conservatives are getting worried. They were stung by the cuckservative barb; they are nervous about the rise of the Alt Right; and they are terrified of Donald Trump, who merely stands for a moderate, non-racial form of nationalism. But like their cousins the Social Justice Warriors [15], when their bullshit is called, conservatives just double down.

French, however, is primarily concerned with keeping his hands clean of the taint of “racism.” So he recommends that we ignore the fact that we are being attacked as whites and focus instead on “universal human dignity, with each of us created in the image of God.” The trouble with such high-minded religious universalism is that it does not stop the onslaught of anti-white identity politics. It only numbs whites to the organized ethnic interest groups gnawing at our entrails. As F. Roger Devlin argues so brilliantly in his essay “Why I Write [18]“:

Those traditional conservatives who continue to admonish us against the dangers of “biological determinism” are increasingly condemning themselves to irrelevance. The plea that “race isn’t everything” is valid per se, but not especially germane to the situation in which we find ourselves. For we are not the aggressors in the battle now being fought. And in any battle, it is the aggressors’ prerogative to choose the point of attack: if they come at you by land, you do not have the option of fighting them at sea.

Race is everything to our enemies, and it is the angle from which they have chosen to attack our entire civilization. It is also where they have achieved their greatest victories: you can see this from the way “conservative” groups feel they must parrot the language of the egalitarians [19] just to get a hearing. Such well-meaning but naïve friends of our civilization are in effect consenting to occupy the status of a “kept” opposition.

The more we try to avoid confronting race directly, the more our enemies will press their advantage at precisely this point. Tactically, they are correct to do so. And they will continue until we abandon our defensive posture and turn to attack them on their own chosen ground.

The great political battle of our time is over race and identity. Our enemies know it, but our friends don’t. Conservatives conserve nothing because they won’t fight. Whites are being attacked as a race. The conservative response, however, is to mumble something about universal human dignity and change the topic to ethanol subsidies. Whites can only defend ourselves as a race. We can only secure conservative values by conserving our race. We must embrace the politics of white racial identity. The only true conservatism is White Nationalism.