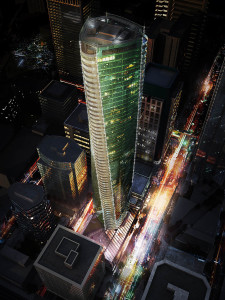 When completed in 2016, the twisting Trump tower in Vancouver will stand at 616 feet.

A few months ago when Trump was beginning his incredible campaign, a minor politician in Vancouver, city councillor Kerry Jang [2], demanded that the planned Trump Tower in Vancouver have its name changed to signal disapproval of Trump’s “racism.” Jang, acting as if the Chinese were the new owners of Vancouver, said that Trump was a “bigot” who stood against the Canadian values of “diversity.”

People like Jang dislike any sense of White identity no matter how implicit it may be. What matters most to the Yin and Jangs is the utilization of White leftist ideas to promote the ethnic interests of Chinese in Canada, a people who come from a most racist culture [3], yet rarely waste a word about it. Moreover, despite all the myriad differences and disputes between non-White activists, at the end of the day they have a common enemy that unites them: European identity. Vested interests [4] aside, it is clear that a great deal of progressive anti-Trump feeling is being driven by an elite leftist coalition with so-called “conservatives.” Both sides are willing to stir up issues or race in order to coerce common people into siding with them.

Liberals support naturalization because it will allow them to gain new voters [5]. Cheap labor is of course another issue and there is also the fact that migration is big business [6]. Internationalist thought has been so widely spread that it has influenced plenty of big money types like Zuckerberg [7].

Trump is against [8] further intervention in Ukraine and for better relations with Russia; he is against toppling regimes that keep the peace and for increasing taxes on the wealthy and lowering taxes for the middle and working classes; positions that also resonated with a great many liberal voters in the recent Canadian elections and would bring jobs back to the US. Trump has also called out the Chinese government for its unlawful practice of currency manipulation [9].


Yet he is called a racist and a fascist for daring to call for stricter immigration laws as regards Muslims [10] and illegals. What is especially great from Trump is that he is self-funding and is not beholden to special interest groups. He is outside the corrupt politico-media-business elite. The moneyed elite cares not for what is best for the whole but what seems to be best for them personally; moreover a great many of them have fallen for internationalist dogma to some degree. He is anti-establishment and genuinely popular and yet your average “anti-establishment” leftist hates Trump. They side with big money, the GOP elite and the mainstream media; they are thus tools of the establishment.

We see similar narratives with other anti-establishment figures like Nigel Farage and Marine Le Pen. They and other rightists who don’t promote mainstream views are all demonized by the powers that be and generally painted with the same brush regardless of whether or not they actually have differing views. Fascist is a favourite term for the left and fake conservatives to use in reference to such people who in reality are quite moderate [11]. No, obviously Trump and other anti-establishment rightists are not fascists and let us actually quote a fascist, Sir Oswald Mosely, about said ideology: “There is no Fascist state, and fascism does not exist. It was a national creed which died in the Thirties.”

Recent controversies regarding Trump’s immigration plans have led to calls that his plans are unconstitutional. The 1790 and 1924 immigration acts are evidence that strict immigration laws are not unconstitutional. After the 1979 Iranian revolution, Jimmy Carter put a brief moratorium on Iranian migration and even went so far as to force 50,000 Iranian students then living in the United States report to an immigration office [12]. But the Overton window has moved dramatically since then. Indeed, nothing about Western civilization supported multiculturalism and mass immigration until cultural Marxism so terribly distorted our civilization and deracinated us. But well before this recent Muslim issue came about, the conservative elite in the US was against Trump, as we have just witnessed with the anti-Trump stand of the magazine National Review and media giant Fox news.

The GOP elite and the left will claim to be about the constitution but they have been distorting and re-interpreting it if not outright ignoring it for decades. Despite right’s claims of being against welfare and PC policies of left and despite the left’s claims against big business connections of the right, and despite collective calls from both sides for democracy, they are actually both for what they claim to stand against. The conservatives have proven to be unimaginative cucks who bow to every leftist whim and the left, for its part, as always, twists and distorts for the gain of an elite few with utopian dreams about “unity through diversity”. For all its pandering to patriotism and tradition the modern conservative movement throughout the West is a cultural lapdog of the left and would much rather work with them than with fellow rightists. Take for example in Sweden where there is a pact between the right and left against the Swedish Democrats. The left almost never engages in such tactics against those further to the left. This is why there is no condemning of far-left parties like Podemos [13], SYRIZA [14], Die Linke [15], Front de gauche [16], Vänsterpartiet [17], and even avowed communist parties, all of whom are, at best, ignored or treated like benign institutions looking out for the little guy, instead of the extremists they truly are.


Journalists, politicians, businessmen, celebrities and others don’t generally view disaffected Whites with empathy or compassion; they view such people as being dangerous and unpleasant. Internationalists seem to think that the founding population is more dangerous than dog-eating, gang-raping foreigners with completely different religious, cultural and ethnic origins. Incredible how at best naïve and at worst insane these people are. Combine this with the anti-Western rhetoric which is epidemic in universities and throughout the entirety of the media and one understands why Trump is popular.Neither group has any empathy with the large numbers of disaffected Whites who support candidates like Trump. Doug Saunders [18] is also taking part in the Trump bashing [19] just as he did Farage bashing. Of course, he has made most of his life’s work promoting Islamic population replacement and Occidental displacement, and we can read it in this story whereby he talks of “conspiracy theories” against Muslims. He notes that most of Trump’s supporters are disaffected and White but offers no sense of empathy towards them. He also states that there are no “brown skinned invaders” when demographics tell a different story. The fact that the GOP leadership and people like Saunders and the even more anti-Trump writers at large American newspapers like the Washington Post and Huffington Post sound alike should be evidence enough that they are all one and the same.

The activist left is so obsessed with anti-Western Cultural Marxism that they could care less about any historical or scientific data which proves their views wrong. As this group is prominent in the universities, it can and does impact media personalities, journalists, businessmen, politicians and others. Activist leftists cry and moan all the time about the apparent “far-right” attitudes inherent in everything from the courts to the news media, but they are clearly too blind and/or stupid to see that there is nothing far-right about our society at all.

They make us fear our own civilization and fear patriots. It is common sense to be concerned about the flooding of a country with foreigners especially if they are as different from us as Afro-Asiatic Muslims are. Even if there were really no reasons to be wary of them coming over, wouldn’t it still be acceptable to have tougher immigration laws? If that is what the people wanted? Most Americans don’t want more immigrants [20] and particularly no more Muslims, and this is especially true of GOP supporters [21]. In fact, Trump’s popularity continues to climb amongst Republican voters. When multiculturalism and global immigration policies were first enacted here in Canada the majority stood against such measures [22]. It was only through decades of indoctrination and liberal brow-beating and conservative cucking that we have reached a situation where there are many vocal advocates of internationalism.

Nigel Farage and Marine Le Pen have both tried to assuage the Left and it has not worked for them. In the most recent French local elections the Socialist Party pulled candidates and called for voters to choose the hated Sarkozy over Le Pen. To further ensure the FN would be defeated at all costs, Prime Minister Valls went so far as to say that voting for the FN would lead to “civil war” [23]! They, FN and UKIP leaders, need to stop trying to acquiesce the left because if they continue down that road they will be no better than the cuckservatives. For all these reasons and more it should not be any wonder that, as James Kirkpatrick states [24], “The rise of Trump isn’t ‘fascism,’ but long overdue resistance and self-defence from an occupied people tired of being treated like enemies of the state in the country they built.”

Thankfully Trump has stuck to his guns and he comes as a breath of fresh air to many. Now other GOP contenders are starting to make similar points as Trump but they are simply trying to win votes here. When it seemed politically correct to ignore immigration they did but now that someone is actually winning supporters with immigration-skeptic rhetoric, they changed their tune. The GOP elite are more than willing to have a non-Trump contender use those views to gain power and then renege on them at the first convenient moment. That being said, the pro-GOP media is just as anti-Trump as it ever was [25].

Illegal immigration is not in America’s best interests. Same goes with heightening tensions with Russia and destabilizing Syria. Trump has so far proven to be the only candidate who consistently fights for America. He has also been very candid about the corrupt nature of political donations [26] and is self-funding. Liberals claim they want someone like Trump who isn’t owned by anyone and speaks truth to power but, oh wait, he said some bad things about Muslims and foreign criminals. What they are most concerned about is appearing open and accepting of non-Whites. Anything even the least bit nativist or patriotic is to be condemned as racist or fascist. Internationalist ideals are held in a higher regard than sound policies and our civilization is left to crumble.

The political and media establishments couldn’t care less. Even those who are supposedly conservative have fallen behind the left. They are one and the same. The SJW crowd can argue against this point all they want but the fact is that they are one and the same with the establishment. The true rebels are those who support nationalism. Perhaps Trump and other right-wing populists are not necessarily the best possible leaders but they are what we need now because they actually talk about defending the traditions of their nations, rejecting the politically correct dogma of the left and the incessant warmongering of the cuckservatives. Moreover, they have exposed our established elites for what they are and are detested for it.

Trump is especially important because he is self-funding and takes every opportunity he can to call out the bias and corruption infecting the mainstream media and American politics. If anyone can clean house it is Trump, or if he fails he at the very least he can pave the way for others to do so. Those who push internationalism would do good to remember that it was thanks to their actions alone that much feared right-wing populists exist in the first place. Maybe they should correct their mistakes and help make the Western world great again.