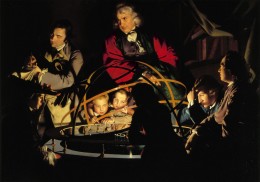 In this essay I would like to compare racial theories and astronomical theories. We all know that the earth orbits around the sun. In the first part, I want to argue that evidence for the reality of race is even stronger than the evidence for heliocentrism, which means that racial egalitarianism should be taken no more seriously than the idea that the world is flat, or the idea that the sun orbits the earth. In the second part, I will use examples from the history of astronomy to throw light on resistance to race realism and how it might finally be overcome.

Racial egalitarianism is the theory that all races are equal in all important respects especially in terms of intelligence, law abidingness, responsible sexual behavior and family formation, and civilizational achievement. If it turns out that this is not the case, (i.e. that the races are actually not the same in these different respects), then this is no problem for racial egalitarianism. The theory then can be slightly modified to state that the races really are equal in all of these parameters but even if they aren’t, it shows no underlying racial differences but is simply the fault of white racism. In other words, if it weren’t for the presence of white racism, all races would be equal in these matters, except possibly whites, who would lag far behind. Racial egalitarians are extreme environmentalists; they completely discount the idea that genetic differences between the races could ever make any important differences.[1]

Racial egalitarianism’s rival theory is race realism, which holds that all the empirical and theoretical evidence shows that racial egalitarianism is false and that the races are actually quite different and that these differences are in large part controlled by genetic differences. This, of course, is the theory that I and almost all of the readers of this essay accept. However, almost all of the people in academia, the mass media, organized religion, and the government at all levels accept (or at least they say that they accept) and promote racial egalitarianism.

Ptolemaic[2] astronomy is the theory that the earth does not move and that all heavenly bodies including the sun, the planets, and the fixed stars revolve around it. It is sometimes referred to as “geocentric” astronomy. How Do You Know?

We all claim to know many things about our world. For millennia, philosophers who specialize in epistemology have tried to analyze these knowledge claims. Although there is no general agreement on exactly how knowledge should be defined,[4] at least two things are non-controversial and would be accepted by almost all contemporary epistemologists: if a knowledge claim is correct, (1) the claim must be true, and (2) there must be some kind of “good evidence or justification” for the knowledge claim.

I claim to know both that Washington DC is the capital of the United States and that Moscow is the capital of Russia. While I believe I know both of these propositions with a high degree of certainty, I believe I know the former with more certainty than the latter. Why? Well, I know that DC is the US Capital from my parents, grade school teachers, high school teachers, and my studies of history, from television shows and newspaper essays, but also because I have been to DC and have direct observational evidence. I sat in the House and Senate galleries and observed Congressmen and Senators make speeches. I have been inside the White House for a guided tour, whereas I have never been to Russia. So I only know that Moscow is the capital from school and by television, radio, internet stories and general reading. I have no direct observational evidence for Russia being the capital of Russia. Hence, I conclude that my evidence for DC being the Capital of the US is greater and therefore stronger than that for Moscow being the capital of Russia. Hopefully, every reader who has been to DC but not to Russia is in the same epistemic boat that I am in. Those readers who have been to DC and also to Moscow and have seen the Kremlin, et al., perhaps know both statements with the same degree of certainty.


I believe I know that Copernican astronomy is true but what exactly is my evidence? Well most of it is simply based on authority. All scientific astronomical authorities from Copernicus and Galileo onward have deemed it true. Many years ago I read Galileo’s classic Dialogues on the Two Chief World Systems[5] and seem to vaguely remember some theoretical considerations concerning why Galileo thought that Copernicus is right and geocentrism is wrong. They had to do with the facts that the tides behaved in certain ways and that he observed phases in the planet Venus with his telescope. In fact, I still own the book and could reread it, and my theoretical evidence would be greater. But even if I did, I still don’t have any direct observational evidence. To me, it looks as if the earth is quite solid and stationary. I observe that the sun “rises” every day and “sets” every night, and the stars and planets revolve around the earth. To sum it up, my evidence for Copernicus is overwhelmingly authoritative and slightly theoretical. I have no direct observational evidence whatsoever for it. In fact the observational evidence that I have supports Ptolemy rather than Copernicus.

Now let me consider my evidence for the truth of race realism. Here I am in much better shape theoretically. I am a regular reader of Counter-Currents, Amren, Vdare, The Right Stuff, and several other race realist websites. I have read much of the work of Arthur Jensen,[6] J. P. Rushton,[7] Richard Lynn,[8] and others which has convinced me conclusively that Racial Egalitarianism is false. I have also read and re-read Michael Levin’s masterpiece Why Race Matters[9] in which he gives a brilliant and concise summary of the case for race realism and debunks all of the ablest intellectual defenders of racial egalitarianism such as Noam Chomsky, Andrew Hacker, Stephen Jay Gould, Leon Kamin, and others. So I believe my theoretical grasp of the issue is sound and indeed much sounder than my grasp of the truth of Copernican astronomy.

But what is even more important is the fact that I have lived in America for 55 years. I have direct observational evidence for the different behavior and abilities of people of different races including blacks, whites, and Asians. I have observed very directly the very low average intelligence and the very high average criminality of blacks (I grew up in Hammond, Indiana which borders on both Gary, Indiana and the south side of Chicago) as well as the fact that they are on average superior in both football and basketball. Moreover, I attended engineering school in California and worked for many years in the electronics and software industries and have directly observed the superior average intelligence of Chinese and Japanese people.

There are quite possibly readers of this essay who live in, say, Iceland or some other country who have never encountered members of other races. Their evidence for race realism is not as good as mine as they have no observations of people of other races. However, they could easily make a trip to more vibrant countries and bring their observational evidence up to the level of my own.

Concerning the relation of genetics to race realism, I really don’t know very much about theoretical genetics. I never took a course in or read a book on genetics. My theoretical knowledge of genetics is pretty much confined to my one course in high school biology and what I have gleaned from reading the works of the race realist writers mentioned above. However, I have observed the effects of genetics within my own family. I have an adopted sibling who is significantly different than my biological siblings and me in intelligence, law abidingness, and welfare dependency. Since all of us had pretty much the same environment, I concluded many years ago that genetics is crucially important to the outcome of a person. I did not need to read theoretical books on genetics to come to know this basic fact.

It should be obvious that while I know that both race realism and Copernican astronomy are true, my evidence for the former claim is much stronger than that for the latter claim. It is certainly possible and probable that some readers of this essay are much more versed in astronomy than I am, and therefore their knowledge of the truth of Copernican astronomy is backed up by more evidence than mine. Yet, even if this is the case, they still must admit that the earth seems stationary, the planets and sun appear to revolve around the earth, and therefore they face the same problem of lack of observational evidence that I do. Therefore they also must conclude that their belief in the truth of race realism is more certain than their belief in the truth of Copernican astronomy.

1. Andrew Hacker, Two Nations, Black and White: Separate, Hostile, Unequal (New York: Simon & Schuster, 1995) On p. 27 Hacker states the following. “There is an easy rebuttal to research and reasoning based on racist assumptions. . . . Of course, races differ in some outward respects [but] despite more than a century of searching, we have no evidence that any one of those pools of race-based genes has a larger quotient of what we choose to call intelligence or organizational ability or creative capacities. If more member of some races end up doing better in some spheres, it is because more of them grew up in environments that prepared them for those endeavors. If members of other races had similar upbringings, they would display a similar distribution of success.”

4. From the time of Plato to 1963 it was generally agreed that the three conditions which constitute propositional knowledge are 1) having a belief 2) the belief is true 3) the true belief is justified. In 1963, Edmund Gettier published an essay “Is Justified True Belief Knowledge?” which decisively refuted this analysis. There has never been a generally accepted conclusive solution to what came to be known as the “Gettier problem” and therefore there is no generally accepted definition of propositional knowledge.