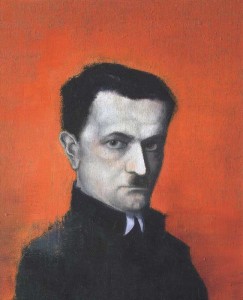 Julius Evola, the ultra-fascist Italian cultural philosopher, was eagerly read not only by Gottfried Benn, but also by Martin Heidegger as an unpublished note shows.

The keyword of Martin Heidegger’s note is “race”; below that appears, in the handwriting of the philosopher, the following sentence: “Wenn eine Rasse die Berührung mit dem, was allein Beständigkeit hat und geben kann — mit der Welt des Seyns — verloren hat, dann sinken die von ihr gebildeten kollektiven Organismen, welches immer ihre Größe und Macht sei, schicksalhaft in die Welt der Zufälligkeit herab.” [“If a race has lost contact with what alone has and can give resistance — with the world of Beyng — then the collective organisms formed from it, whatever be their size and power, sink fatefully down into the world of contingency.”] The quotation is taken verbatim from the book Revolt Against the Modern World, which was first published in German in 1935; only the spelling of “Being” has been Heideggerized.

The author of the work was the Italian cultural philosopher and esotericist Julius Evola (1898-1974) — a racist and anti-Semite who revered the SS as an elite order, developed a Fascist racial doctrine, and a wrote a Preface to the Protocols of the Elders of Zion. After the war, the Italian fascists revered him. To this day he is considered a leading figure of the extreme Right across Europe. [. . .]

The as yet unpublished excerpt could give new direction to the ongoing Heidegger controversy. Evola’s name does not appear in Heidegger’s published writings, and Heidegger scholarship has taken little notice of him. Even the Italian philosopher Donatella di Cesare does not mentions Evola in her book Heidegger, the Jews, the Shoah (2015). Yet textual comparisons suggest that Heidegger had not only read Evola, as this note indicates, but was also influenced by his ideas from the mid-thirties on, from his critique of science and technology, his anti-humanism and rejection of Christianity, to his “spiritual” racism. If this thesis is correct, then perhaps one could view the late Heidegger as a radical fascist esotericist who hoped that rule by a spiritual elite would bring about the reappearance of the gods.

Of course this single note establishes only that Heidegger read one of Evola’s books, not that he read it “eagerly.” Nor does it indicate what Heidegger thought of Evola. But it is still an important discovery. It could lead nowhere. (It could be Heidegger’s sole reference to Evola.) Or it could be the tip of an iceberg. An Evola connection could end up throwing a great deal of light on Heidegger’s interests and associations. No matter what the outcome, Vasek’s discovery is the beginning of an important academic research project. Are there other references to Evola in the Heidegger papers? Did Heidegger read other works by Evola? Did he annotate Evola’s books? Did Heidegger correspond with or meet Evola? (Both thinkers visited one another’s homelands.)

I have long wondered if more mainstream thinkers of the Right like Heidegger and Carl Schmitt were aware of the Traditionalist school of Evola and René Guénon. This suspicion was based less on shared doctrines than on shared concerns. A philosopher’s concerns are, in effect, the questions he is trying to answer; his doctrines are his attempts to answer them. Heidegger and Schmitt shared their Right-wing politics and critical eye on modernity with Evola and Guénon. That alone was sufficient reason to read them, even if they arrived at very different conclusions. Thus I was pleased to learn from Mircea Eliade’s Portugal Journal that Schmitt said, “the most interesting man alive today is René Guénon” and that Eliade agreed, although his conviction sometimes wavered.[1] [8] (Eliade also met Evola, corresponded with him, and read his works.) And now we have positive evidence that Heidegger read Evola.

I am skeptical, however, of Vasek’s assertion that Heidegger was influenced by Evola from the mid-1930s on, specifically on such matters as science and technology, anti-humanism, the rejection of Christianity, and race and anti-Semitism. For one thing, Heidegger had rejected Christianity long before the 1930s. I eagerly anticipate Vasek’s “textual comparisons,” but my fear is that they will be superficial. For although both Heidegger and Evola shared a generally Right-wing political outlook and believed that technological modernity was the culmination of a long process of decline going back to antiquity, their ultimate philosophical premises were very different.

Evola’s “world of Being” is essentially a Platonic realm of eternal, intelligible truth that stands in opposition to the “world of contingency,” which is intelligible only insofar as it reflects the world of Being. By contrast, Heidegger’s concept of “Beyng” (a rendering of his use of Seyn, the archaic spelling of the German Sein) refers to his concept of “Ereignis,” which is actually an unintelligible contingency that establishes different reigning interpretations of man and world. Beyng is a source of historical meaning that can neither be understood nor controlled.

Evola believed that history’s downward trajectory toward technological modernity and cultural decadence was a falling away from the world of Being into the world of contingency. Heidegger, however, regarded Evola’s essentially Platonic outlook as part of the decline itself, indeed as standing very close to its beginning.

For Heidegger, the Platonic distillation of Being as pure intelligibility and intellect as the capacity to intuit the intelligible is false because it is an abstraction that overlooks a more fundamental unity, a mutual belonging of historical man and meaningful worlds. For Heidegger, we are too close to things and to ourselves, too involved in them, to fully understand or control them. He believes that metaphysics posits both intelligible Being and a self-transparent intellect out of a drive for mastery. Thus the will to power that comes to fruition in global technological civilization is present at the very beginning of the metaphysical tradition.

Heidegger claims that we overlooked this fundamental unity because it, in effect, concealed itself. It is a historical event that cannot exist apart from man but nevertheless was not controlled by man either. The self-concealment of Beyng creates metaphysics. And metaphysics inaugurates the downward course of history, culminating in technological nihilism. Contra Evola, the beginning of decline is not a fall from metaphysics, but a fall into metaphysics.

Throughout his philosophical career, Heidegger battled against false concepts of human nature. The common denominator of these false concepts is that they are universal. In the metaphysical tradition, the essence of man is what all men have in common. What reason tells us we all have in common is reason itself. Man is the rational animal.

You can buy Collin Cleary’sWhat is a Rune?, featuring extensive discussions of Heidegger, here [13]

Heidegger’s word for human nature, however, is Dasein, which means “being here/there.” Dasein is not a view from nowhere, but a view from somewhere. Dasein’s outlook on the world is particular, not universal. It is particularized by space and time, and particularized by language and culture, which it shares with other Dasein in its community—but not with all of humanity. Heidegger is a philosopher of distinct identities, of the concrete, of the local, and of belonging, which is a mutual relationship: We belong to our world, and our world belongs to us. (The name of this concrete mutual belongingness is Ereignis.)

Heidegger’s concept of Dasein is inherently political. We are not the rational animal but the national animal, and nation is defined by a common history, language, culture, and destiny. The politics of Dasein is, therefore, ethnonationalism.

Why not racial nationalism? Heidegger would not deny that race is part of ethnic identity. To be German one must be white. But there is more to being German than being white. Heidegger feared that defining identity in terms of biological race alone was another form of deracinating universalism. Not as universal and deracinating as “humanity,” but with similar consequences. For if whiteness is essential, then it is easy to become indifferent to Germanness and Englishness, which is the road to deracination and homogenization. But for Heidegger this is a form of inauthenticity, a failure to own up to our full identity and carry forward the cultural and linguistic particularities of our heritage.

You can buy Jef Costello’s Heidegger in Chicago here [15]

Nevertheless, despite the deep and fundamental rift between Heidegger’s and Evola’s views, Heidegger still chose to copy down Evola’s words. That means something. The fact that Heidegger also changed “Sein” to “Seyn” was probably no slip of the pen. It means something too. Was Heidegger endorsing Evola’s basic schema that the vitality of a people derives from its contact with a power that transcends its understanding and control? By changing Sein to Seyn, was he transposing Evola’s metaphysical version of this theme into his own anti-metaphysical key? Translated into Heideggerian terms, Evola’s schema is that a people, defined not in spiritual but cultural and historical terms, loses its vitality by turning away, not from Platonic ultimate reality, but from its participation in historically evolved practices of meaning—its traditions—and turning toward, not the world of contingency, but the modern mania for certainty and control, expressed in the racial sphere as eugenics and other public health measures. This is certainly consistent with Heidegger’s discussions of race from the 1930s, including remarks from before the publication of the German translation of Evola’s Revolt Against the Modern World.[3] [16]

Some take the view that Heidegger’s philosophy was essentially apolitical. Then he blundered into his unfortunate dalliance with National Socialism. Then he returned to an apolitical outlook. This is false. Heidegger’s thought is ethnonationalist to the core. This implies that it never ceased being so. Thus the later Heidegger’s politics simply went underground. It became hidden, occult, esoteric. Which means that Vasek may be on to something when he writes, “perhaps one could view the late Heidegger as a radical fascist esotericist who hoped that rule by a spiritual elite would bring about the reappearance of the gods.”

My view is that Heidegger’s disillusionment with National Socialism, which began in the middle of the 1930s, led him to search for a way of defining a post-totalitarian, ethnonationalist critique of globalizing, homogenizing modernity. In short, Heidegger was the first thinker of the New Right.

If you want to support Counter-Currents, please send us a donation by going to our Entropy page [17] and selecting “send paid chat.” Entropy allows you to donate any amount from $3 and up. All comments will be read and discussed in the next episode of Counter-Currents Radio, which airs every Friday.